One golden day in late June 2022 I was walking my Saluki Zenobia by a canal near the great English city of Birmingham. Birds were singing, dragonflies were zooming, meadowsweet was richly scenting the air. I passed a moored canal-boat, freshly painted and gleaming in the sun. On its side, in elegant white script, ran the beguiling syllables LLAMEDOS. “What a beautiful and mysterious name,” I mused. “Is it from Tolkien? No, it must be Welsh.”

The mask for an evil agenda

Then something prompted me to read the name backwards. And I laughed. If you read it backwards, LLAMEDOS is “Sod ’Em All,” a crude British expression meaning roughly “Damn Them All.” I like the joke and I think Chaucer would’ve appreciated it (the boat-owner is probably a fan of Terry Pratchett). I don’t think the name is mocking linguistic beauty or exalted language. It’s acknowledging them, but reminding you with a wink that “All that glisters is not gold.” LLAMEDOS smiles, “Sod ’Em All” growls.

Well, I remembered that summer’s day and the name on the canal-boat when I recently watched a third video from anti-trans Twitter accounts like LibsOfTikTok, which is run by an Orthodox Jewish woman who doesn’t supply as much information about her “libs” as she could. I don’t go on Twitter much and I’ve watched only a few videos there. Three of those videos made a big impression on me. Each of them features a different woman radiating sincerity and good-will with lots of smiling and nodding and eye-widening. 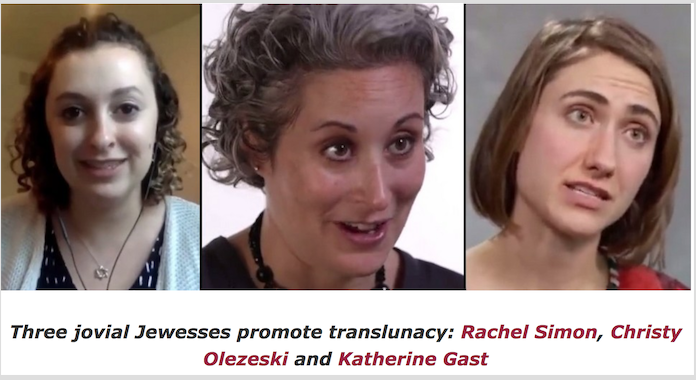 In this video Christy Olezeski, PhD admits that Yale Medicine is treating kids as young as 3 YEARS OLD in their “gender journey”. She’s the co-founder of the Yale Pediatric Gender Program. 3 YEAR OLDS should not be led to change genders! Leave them alone @YaleMedicine. pic.twitter.com/lA20Yd7W2K 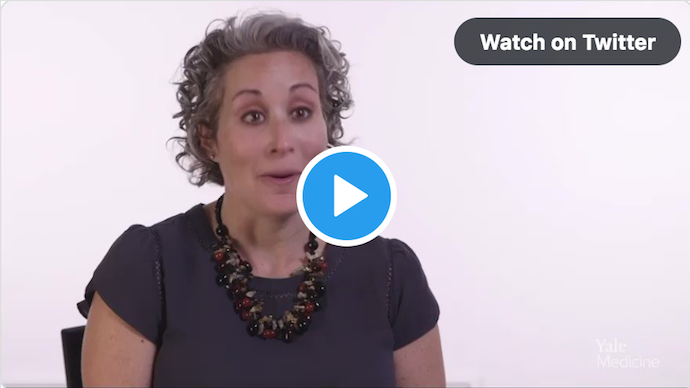 Rachel Simon, who conducts transgender “therapy” on children as young as 4, said that “sexuality education starts the minute you’re born” and encouraged teens to distrust their “bigoted, misinformed parents,” especially if they are “religious.” — Jovial Jewess Rachel Simon at Twitter

Trans activist Chase Ross demonstrated artificial penis “packers” in a presentation open to minors. “If you’re a kid, and you want a prosthetic that’s a little bit smaller, like, this is the way to go … If somebody grabs you, like, ‘Oh my God, you’re hard.” pic.twitter.com/LpG64ykvl3 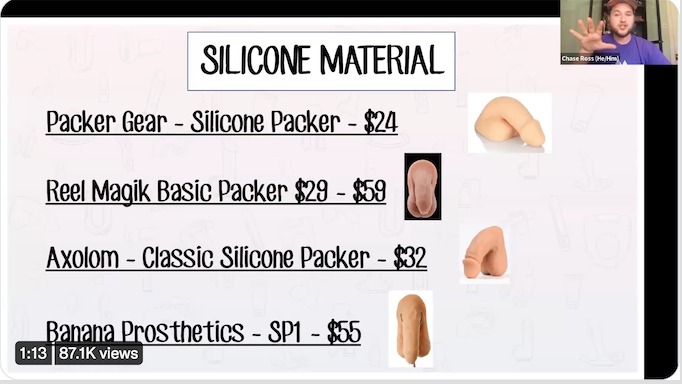 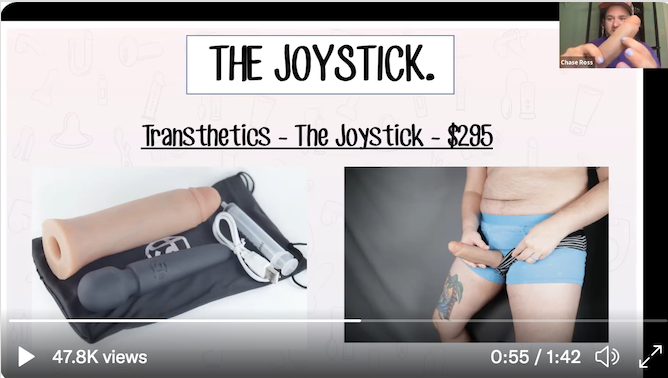 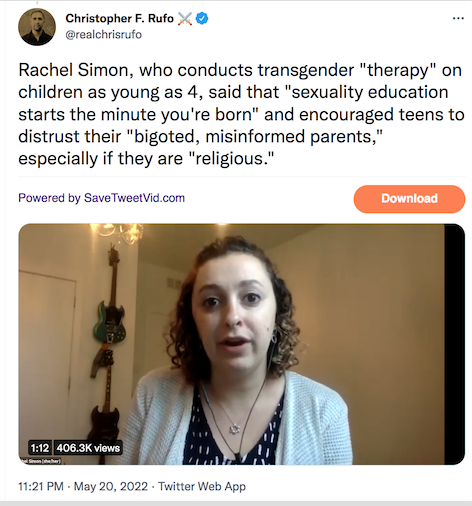 Gast happily describes some of the “gender affirming” surgeries she offers to adolescents including vaginoplasties, phalloplasties, and double mastectomies. — Jovial Jewess Katherine Gast at Twitter 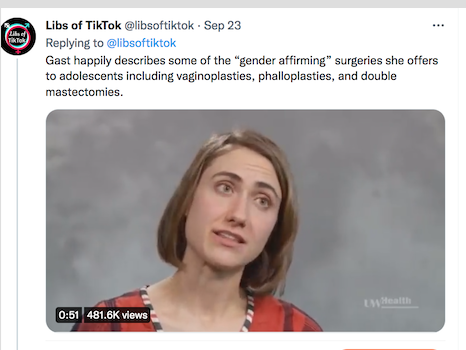 But the smiles on the punims are the mask for an evil agenda. Even if you watch the videos with the sound off, you may find that the curiously similar expressions of the women make your flesh creep. If you watch with the sound on, your flesh will certainly creep, because all three of them are talking happily about mutilating the minds and bodies of teenagers and children. In short, they’re priestesses in the cult of translunacy. And what are the odds that all three of them should be drawn from a certain tiny minority? Each video turns out to star a jovial Jewess smiling and nodding and widening her eyes as she celebrates doing things like this to young gentiles:

Penile-inversion vagoplasty, for trans-feminine patients, so male to female, is about taking a penis and essentially turning it into a vagina. … So we create a clitoris from a portion of the glans penis, the scrotal skin becomes the labia majora, a portion of the penile skin becomes the labia minora and then we line the new vagina with the rest of the penile skin and sometimes a skin-graft. … Phalloplasty, for trans-masculine patients, or female to male, is about creating a penis through tissue-transfer. So we take tissue either from the fore-arm or from the leg or sometimes both and we transplant it down to the groin-area to create a phallus. And essentially we lengthen the urethra and turn the labia majora into a scrotum. We remove the vagina and close the hole between the legs and create a phallus. … Top surgery, or female to male mastectomy [breast-removal], for trans-masculine patients who have significant dysphoria related to their breasts. So they don’t want breasts any more. So essentially it’s a cosmetic mastectomy and depending on the breast-size and the amount of skin, we can use different kind of scar-patterns and re-section techniques using direct excision plus or minus liposuction to create a more male chest. Three hours in the operating-room, patients go home the same day. They may or may not have drains and they wear compression-vests post-op, but typically these patients are very happy and [the mastectomies] allow them to wear clothing that’s comfortable and not wear binders and it’s a happy day for everybody. (Transcript of video at LibsOfTikTok) 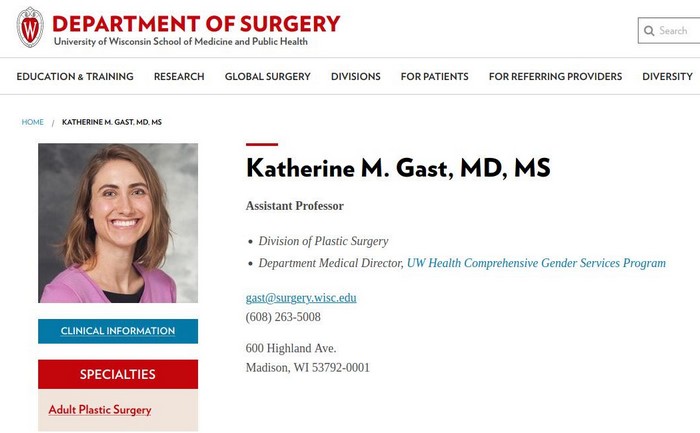 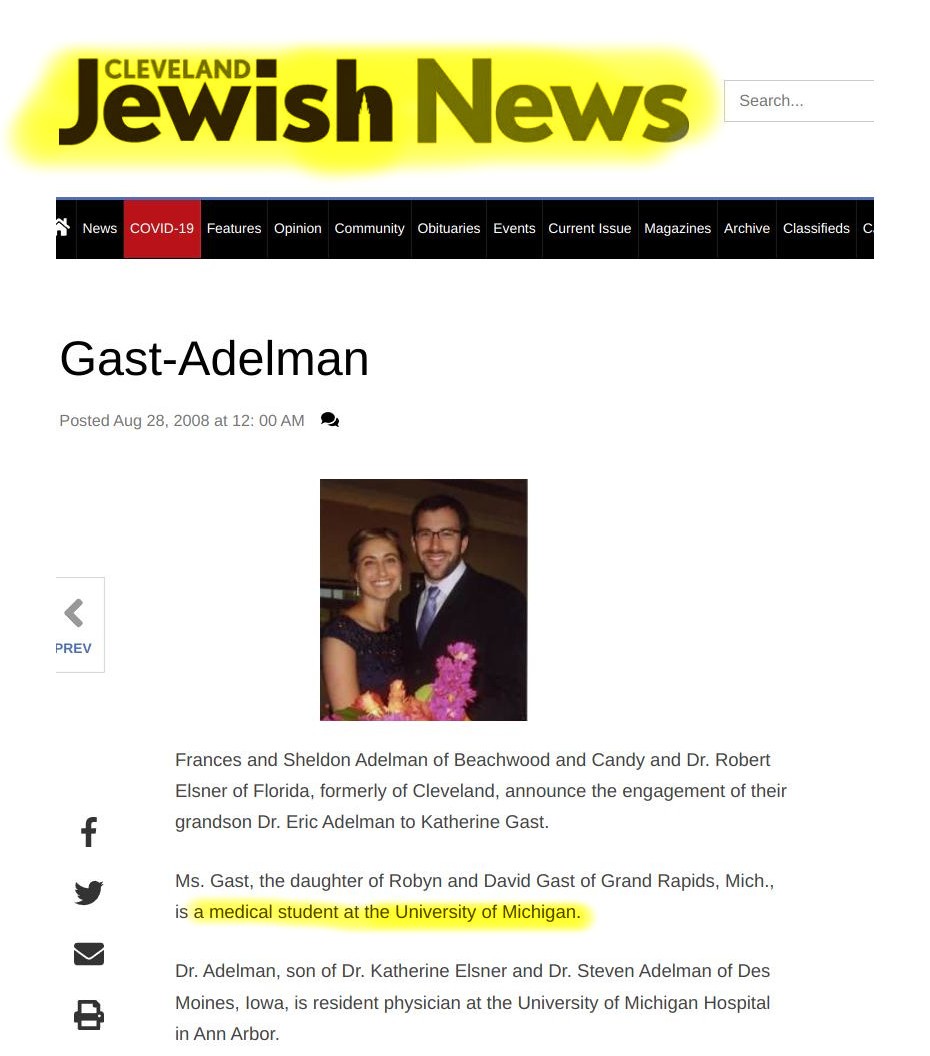 Those words are from the Jewish “gender surgeon” Dr Katherine Gast, whose marriage to Dr Eric Adelman was reported in the Cleveland Jewish News in 2008. I suspect that another of the jovial Jewesses, the psychiatrist Christy Olezeski, has been under the surgeon’s knife herself. She seems to have had a nose-job, presumably to look more gentile and less Jewish. She began her career as a “Predoctoral Intern” at “Westchester Jewish Community Services” and now describes her work at Yale University like this:

I am the Director and co-founder of the Yale Pediatric Gender Program (YPGP), an interdisciplinary team that provides services for transgender and gender expansive (TGE) youth and families in Connecticut. The team includes professionals in the fields of psychology, endocrinology, psychiatry, gynecology, reproductive medicine, medical ethics and law. Our mission is to provide comprehensive, interdisciplinary, family-centered care for children, adolescents and young adults questioning their assigned gender and/or seeking gender-affirming consultation and treatment in a compassionate, respectful and supportive environment. This program is regionally well-regarded, serving clients from all 8 counties in the state, as well as 4 states outside of Connecticut. (Christy Olezeski, PhD, at the Yale Department of Psychiatry)

The third jovial Jewess, the “psychotherapist, educator, consultant and author” Rachel Simon, hasn’t had a nose-job and doesn’t seem to mind about looking Jewish. She’s wearing a silver star-of-David as she smiles and widens her eyes and talks about “bigoted and misinformed parents” who don’t want their children to be introduced to the joys of gay sex and the treasures of transgenderism. Ms Simon proudly describes herself as “the author of The Every Body Book, an LGBTQIA-inclusive sex-ed resource for 7-to-12-year-olds.” 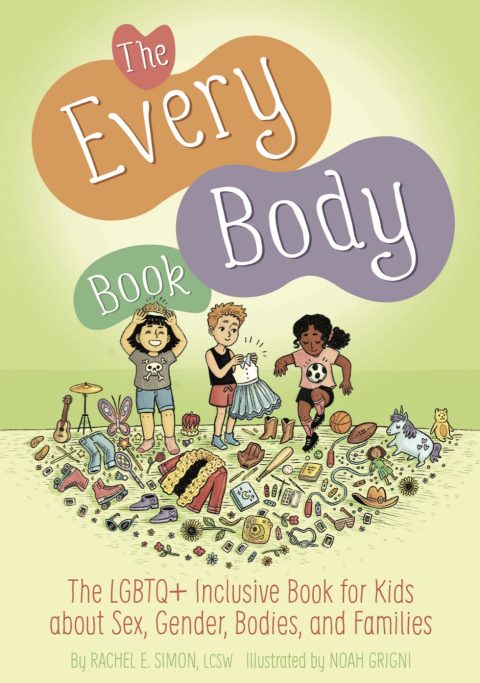 No need for prison

Would all three of these jovial Jewesses be serving long prison-sentences in a sane society? Well, no. There would be no need for prison, because they wouldn’t be in a sane society in the first place. In other words, a sane society would not be enriched by the presence of Jews, who are the world’s greatest promoters of perversion and mental illness.

Unfortunately, they find that White women in particular are very receptive to their subversion. In her “gender-critical” book Trans: When Ideology Meets Reality (OneWorld Publications 2021), the feminist Helen Joyce inadvertently supplies some excellent arguments for patriarchal control and against female autonomy. Discussing the sharp rise in translunacy among younger (White) women, Joyce says this:

The history of medicine is scattered with psychosomatic diseases that appeared, spread like wildfire and died away as medical thinking changed again. One sign a new condition may fall into this category is that it mainly affects teenage girls and young women. They are more likely than other demographics to indulge in “co-rumination”: repetitive discussion and speculation within a peer group. That can lead to internalising problems, and hence to anxiety, depression and self-harm. Girls are also often more empathetic than boys, and better at reading moods, which means emotions spread faster in a female peer group than in a male one. This is why self-harm and eating disorders can run through female friends, and why historical episodes of mass hysteria, such as fainting fits, uncontrollable laughter or crying, and outbreaks of paralysis or tremors, have so often occurred in convents and girls’ schools. (Op. cit., Ch. 5, “Miss Gendering: Why teenage girls are identifying out of the prospect of womanhood,” pp. 106-7)

In effect, Joyce is accepting a highly sexist stereotype of young women not just as conformist, histrionic, and hysterical, but also as needing male control and influence to protect them from their own toxic emotionality. Later in her book, Joyce notes that “young women” are “the demographic keenest on gender self-ID” (p. 225), despite the threat it poses to them and to female-only spaces. Translunacy is yet another example of how Jews play a necessary but not sufficient role in the collapse of the West, because they need goy customers and fellow-traveling professionals for their ideological poison. White women are now proving very eager customers for translunacy.

“It is no longer considered an extreme behaviour but increasingly portrayed as a prized and pleasurable experience,” wrote Hunt, a surgeon in Sheffield, and Gana, a trainee colorectal surgeon in Yorkshire. Many doctors, though, especially GPs and hospital doctors, are reluctant to talk to women about the risks involved, partly because they do not want to seem judgmental or homophobic, they add.

Fleeing Jews to be mutilated by Jews

Can you blame those adolescent shiksas who want to shun adult sexuality and deny their own femaleness by becoming “transgender”? I can’t. Not in the slightest. But when those shiksas flee Jews and their poison in one part of modern Western culture, they fall into the hands of jovial Jewesses like Dr Katherine Gast, who will cut their breasts off and announce that: “It’s a happy day for everybody.”