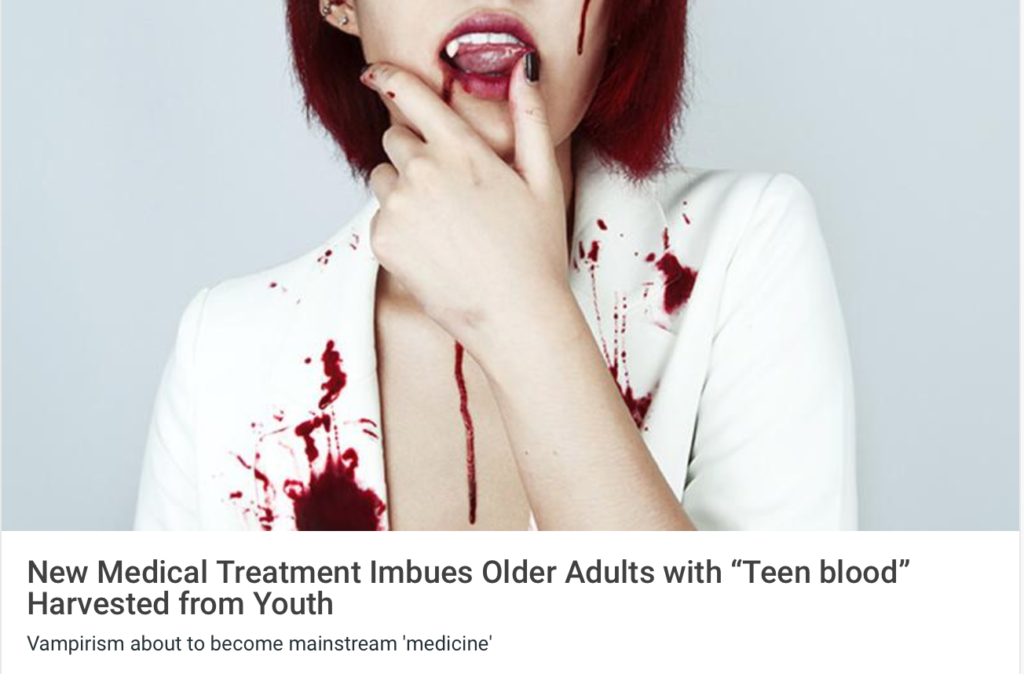 Of course, much of this “young blood” is actually coming from newborn infants who have their cord blood stolen at birth and then fed to the vampires that control the medical system and every other institution in America.

(Natural News) In a shocking turn of events, the mainstream media is now openly admitting that the “elite” are spending top dollar to obtain infusions of “young blood” from teenagers, which they believe contains some kind of fountain of youth.

Reports indicate that a new clinical trial known as “ambrosia” is testing the effects of young blood, which contains special growth factors not found in older blood that some believe can help to reverse the aging process.

“There are pretty much people from most states, people from overseas, people from Europe and Australia,” revealed Dr. Jesse Karmazin, who’s working on the project, to CBS Philadelphia about the types of participants involved in the trial.

Those who obtain the blood transfusions from young people are being paid $8,000 to see how it affects them – and if all is a success as Dr. Karmazin hopes, then he plans to start an entire business selling young blood for profit.

In explaining what he claims he’s already observed in test rats, those given the transfusions apparently saw a reversal in the aging process.

“Their brains are younger, their hearts,” he stated. “Their hair, if it was gray, it turns dark again.”

Similar research is also taking place at Stanford University, where researchers are reportedly testing the effects of young blood on Alzheimer’s patients.

According to Dr. Sharon Shaw, an Alzheimer’s researcher at Stanford, young blood is already showing evidence of helping to improve the functional abilities of dementia patients.

“We found that it was safe and feasible to administer infusions of young plasma weekly,” she told the media. “It’s all very exciting that there can be components in blood that can be healing.”

For more related news, be sure to check out Twisted.news.

It would be a mistake, however, to think that the use of young blood in anti-aging therapy is still in the testing phase. These same reports indicate that the therapy is already being used as part of so-called “vampire facials” to treat wrinkles, as well as joint and tissue injuries.

Platelet-rich plasma, also known as PRP, involves siphoning blood from a patient’s own body, only to apply it topically as a type of healing “serum” to address a variety of health concerns, including the damaging effects of the aging process.

In some cases, “vampire facials” are being applied to patients’ heads in an attempt to regrow hair.

“We can actually use your own blood to stimulate the body,” claims Dr. Hooman Khorasani, who heads the Division of Dermatologic and Cosmetic Surgery at Mount Sinai Health System.

While current research on this particular application is ongoing, Dr. Khorasani says that what’s already been uncovered “looks very positive.”

“There’s still a lot of unknowns and factors we don’t know when we’re actually getting another person’s growth factors and nutrients injected in us,” he admitted.

In the case of blood transfusions administered for other purposes, it’s already known that some people will experience harmful side effects, including things like hives, lung injury, and deadly infections. These and other adverse effects may also accompany young blood transfusions, hence Dr. Khorasani’s concerns.

But none of this seems to be stopping the young blood train from plowing out of the station, once again illustrating that almost nothing is sacred to modern medicine, including stealing the life force from the young and injecting it into the old – and particularly those who are wealthy and old.

To keep up with the latest news from an independent and uncensored perspective, be sure to visit Awakening.news.