Dear Friends – Jews will be jews.  The filthy satanic cult we call JEWdiasm — replete with deranged adults engaged in infant torture, genital mutilation, blood sucking/drinking, human and animal sacrifice, incest, child rape, pornography, homosexuality, and every other abomination known to this Earth — this filthy cult must meet its end!!!!  This kind of evil should not be permitted to exist anywhere on the Earth or in this universe!  Permanent expulsion and eternal quarantine is the only solution I can see.  These creatures should not be allowed to co-exist with other beings.  They are a menace to all living things.

Workers, employed in separate hospitals but in contact with each other, found in possession of thousands of pedophilic photos, including exposed minors prior and during surgery

Two hospital workers were arrested on suspicion of pedophilia, with one of them accused of having performed sexual acts on a child less than a year old, according to Hebrew media reports on Tuesday.

Oren Chananayev, 28, from Kiryat Yam, and Daniel Yaakov, 25, from Ramat Gan, were both found in possession of large quantities of pedophilic material, which was revealed as a result of an ongoing criminal hearing in the Tel Aviv District Court, Channel 12 reported.

Chananayev worked as a nurse in Haifa’s Rambam Medical Center, where he allegedly filmed himself sexually assaulting a baby under the age of a year.

Yaakov, who was employed by Sheba Medical Center as a janitor, was arrested last month in his Ramat Gan home, with police seizing large amounts of pedophilic material, as well as records of conversations with other pedophiles.

In Yaakov’s locker at the medical center east of Tel Aviv, police found more illicit material on a cellular device and in a notebook. According to Channel 12, police found “thousands” of photos and videos in Yaakov’s possession, targeting adults, children and toddlers.

In one image found by police, a young girl is unknowingly photographed with her lower half exposed as she waits to enter the surgery room.

It was conversations between Yaakov and Chananayev, found by police, that led to the latter’s arrest. In one exchange between the pair, Chananayev advised Yaakov regarding drugs that can be used to sedate a child and reduce the victim’s resistance.

In another conversation, the pair devise games that can be played with the children to serve as a cover for performing sexual acts on the victim.

Like Yaakov, Chananayev was found with thousands of piece of illicit material, including a photo of an exposed woman taken during surgery, as well as a video of himself performing sexual acts on a doll.

Must Read Commentary from the editor at The Ugly Truth

And once again, ladies and Gentile-men, time for us here at this humble little informational endeavor to remind the reader that the contents revealed in this horrid story featuring 2 followers of Judah-ism sexually assaulting children–in one case, a child less than a year old–are not an aberration or an anomaly, anymoreso than would be a news story featuring someone dying after being bitten by a rattlesnake or some other poisonous viper.

Quite simply, this is the nature of the beast, and this is what it does.

Now, of course there will come from out of the woodwork the OBLIGATORY apologists and ‘explainers’ who will say that the 2 Judah-ites did this because they violated Judah-ism’s ‘strict rules’ governing the sexual abuse of others, namely children. Other apologists and ‘explainers’ will go further in saying that this is all the result of the teachings found within the ‘Talmud,’ which very clearly gives license to the Judah-ite that he may have sex with children as long as they are ‘younger than 3 years and a day’, while at the same time, our Talmud ‘expert’ will say that the Torah–a ‘holy book’ as apologists such as these claim–forbids such an evil thing…

As far as what the Talmud does have to say about this, the aforementioned detractors of this evil compendium of Judaic religious teachings are correct–

And by the way, ladies and Gentile-men, the above citation was lifted from what is perhaps one of the most AUTHORITATIVE online sources dealing with Judaic and Talmudic teaching, the website Sefaria dot org, where the curious Gentile with a vested interest in his/her own future survival can go and see for him/herself the truly deranged and diabolical spiritual energies that animate the followers of Judah-ism and drive their behavior.

What must be understood within the context of the license given by Judah-ism in using children for sexual purposes is that even though indeed the SPECIFICS of this license are found within the Talmud, the FOUNDATION upon which these ‘specifics’ are based emanates from the Torah and the teachings of Moses, in this case, the book of Numbers, chapter 18 that reads as follows–

…And Moses said to the people, ‘Arm your men for war, that they may go against the Midianites and execute the LORD’s vengeance upon them. Send into battle a thousand men from each tribe of Israel.’

So a thousand men were recruited from each tribe of Israel—twelve thousand armed for war. And Moses sent the thousand from each tribe into battle and they waged war against Midian, as the LORD had commanded Moses, and they killed every male. The Israelites captured the Midianite women and their children and plundered all their herds, flocks, and goods and then burned all the cities where the Midianites had lived, as well as all their encampments, and carried away all the plunder and spoils, both people and animals.

But Moses was angry with the officers of the army—the commanders of thousands and commanders of hundreds—who were returning from the battle. ‘Have you spared all the women?’ he asked them. ‘Look, these women caused the sons of Israel to turn unfaithfully against the LORD…

Now, there are several major ‘protocols’ associated with this that all Gentiles living on God’s green earth with a vested interest in their own future survival need to understand–

A. YES, Judah-ism–going all the way back to the teachings of Moses–permits the sexual exploitation of children, and especially GENTILE children who have been ‘captured’ in war.

This is important for 2 reasons–

1. That there is a ‘war’ going on in the West, a ‘culture’ war aimed at destroying every vestige of decency and morality is beyond dispute and which has been/remains to this day the result of Judah-ism’s attack on Christian moral values through the uncontested control which the followers of this diabolical doomsday cult maintain over Hollywood, media, entertainment and academia…

One of the most important ‘theatres’ of battle in this regard has been the overt, out-in-front-and-in-your-face assault on the innocence of children who as of this moment, are being ‘groomed’ and sexualized, a fact that is manifest in every corner of the same Western society that has been ‘conquered’ by the organized forces of anti-Gentilism otherwise known as ‘Jewish interests’.

Therefore, according to the protocols of both the Torah and Talmud, the ‘Israelites’ today who stand as conquerors of Western Christian society have every right to utilize children for their own diabolical sexual pleasures.

What’s worse is as follows–

2. Soon, if/when ‘they’ get their way, it will all be legalized as part of the 1st Amendment’s ‘freedom of religion’ clause which is now being utilized to great effect in striking down state laws governing the business of child murder otherwise known as ‘abortion on demand’ given that Judah-ism–based both upon the teachings of the Torah and the Talmud–permit the murder of unborn children.

For those interested, see what it is that the Talmud has to say about this grisly business, also found on the website Sefaria dot org, to wit–

The source for deciding when an abortion is appropriate is the Mishnah in Tractate Ohalot (7:6) that rules that as long as the majority of the body [or the head] has not been delivered, the fetus may be dismembered and removed limb by limb from the womb…

And, finalmente ladies and Gentile-men, we’ll revisit a theme that we have been covering more and more on this humble little informational endeavor these days, which is this– –The love and the protective instinct which Jesus Christ maintained towards children, going so far as to declare that anyone who would harm one of them should be executed for doing so, specifically via the method of having a stone tied around their necks and them being thrown into the sea.

Doubtless that during His own day, the Judah-ites were as heavy into abortion and the sexual exploitation of children (more than likely operating various ‘theatre-tents’ where sexual deviants could go and watch as Gentile children were being raped and molested or even brothels where Gentile children could be used for the Jews’ sexual pleasure) as they are today and probably making lots of shekels in doing so–

–And therefore which begs the following question–

How much of Jesus’ pro-child/pro-life protective instincts led to the Jews of His own day deciding to deal with Him as pictured below? 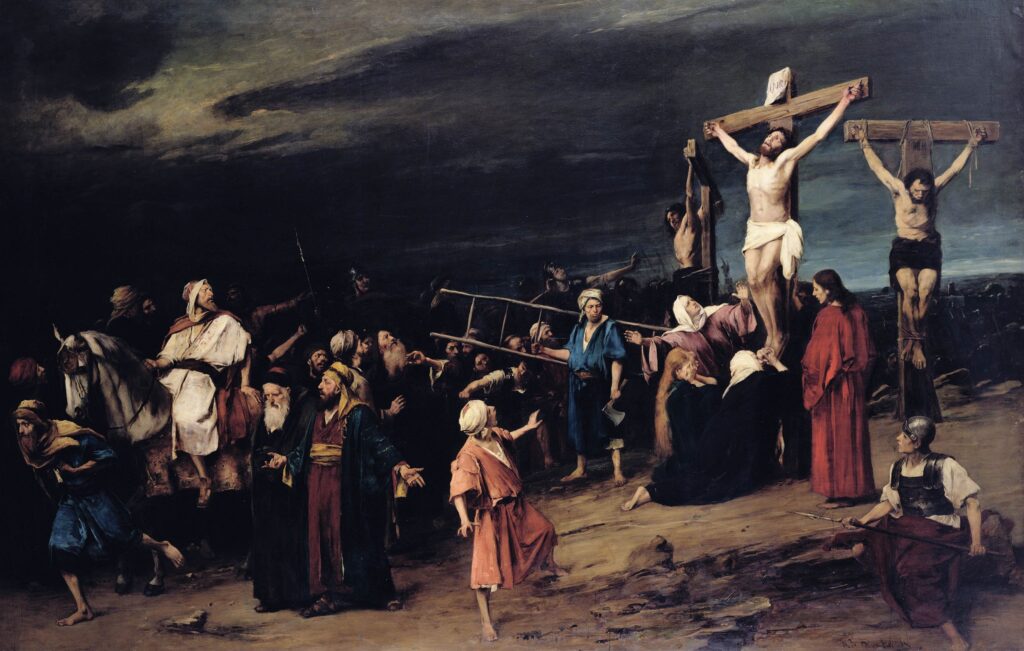 We’ll end this little ed note commentary referencing another ‘biblical’ theme, this one from the same ‘Book of Revelations’ that has become something of a drug for hundreds of millions of Christians around the world these days who are greedily anticipating the arrival of ‘the beast’ and Jesus’ return to do battle with that evil system, which is that the author of that same Book of Revelations, John of Patmos, wasn’t just being ‘poetic’ when he referred to this beast as–

‘The Synagogue of Satan’