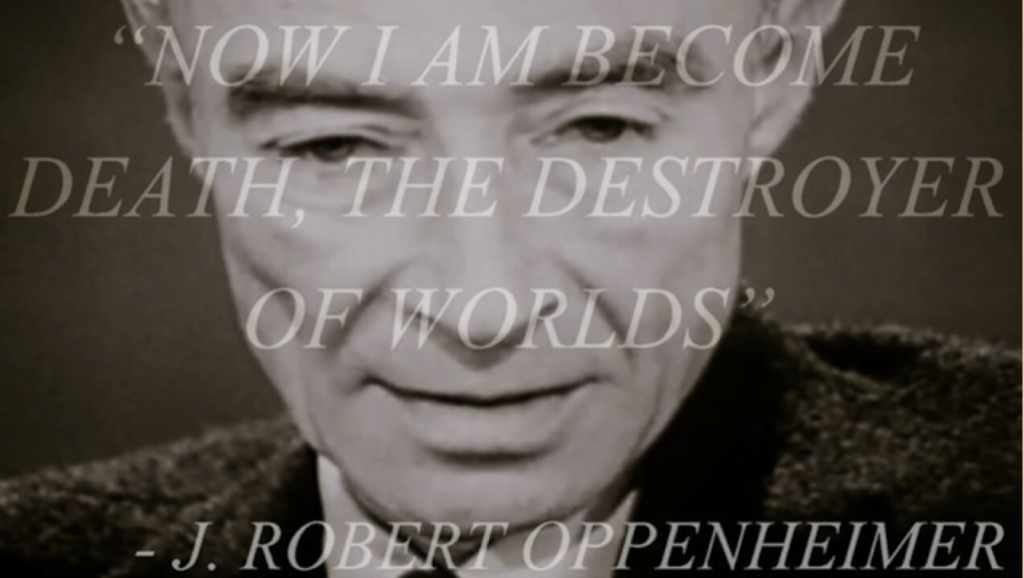 In less than one century, the luciferian creatures that have emerged from the pit and are now inhabiting a very satanic bloodline, have managed to wreak havoc with our entire world. The world needs to finally wake up and see the true nature of these beings, who they serve, and who and what they really are.

They must be expelled from our realm. They must be returned to the pit with no possibility of return.  We cannot co-exist with them any longer.

The nuclear weapons that threaten humanity have been a legacy of the Jews.

The total number of the Jews involved in the Manhattan Project—i.e., the development of the atom bomb—is truly staggering. The list below contains only the names of the most noted Jewish scientists who worked directly on the Manhattan Project. Nearly all of the individuals on the list were hard-core Communists. Many more were spies, who gave the formula for the atom bomb to the Soviets.

Upon researching, I was appalled at how the authors [mostly Jews], who wrote articles and biographies of the individuals below, portrayed these mass-murderers in a very positive light, exalting many to a hero status.

The first atomic bomb was designed and constructed in Los Alamos, New Mexico. The top-secret code name given to this work was “The Manhattan Project.” The reason for the name was that Bernard Baruch, an important Jew involved, lived in Manhattan, New York, as did many of the other top officials.

The chief scientist of the Los Alamos Laboratory from 1943 to 1945 was J. Robert Oppenheimer, another prominent Jew. 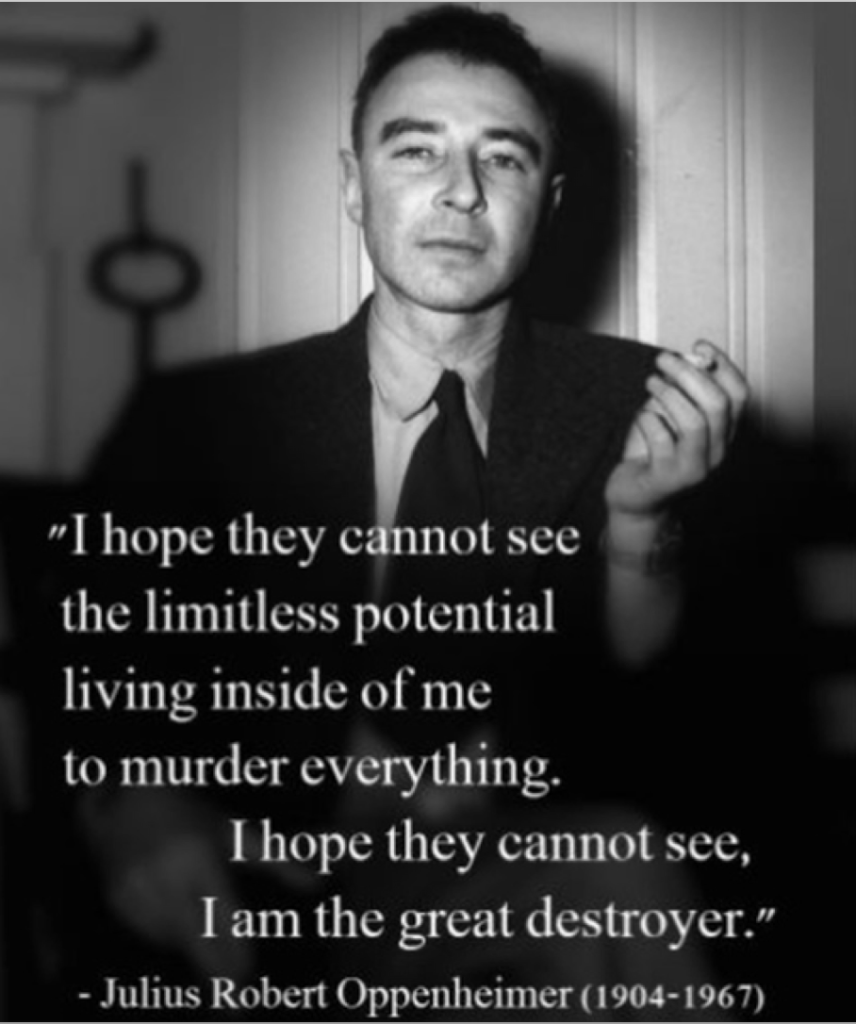 According to Ben Klassen, quoted here: “One of the central figures in not only laying the theoretical ground work but also persuading President Roosevelt to launch the whole atomic bomb program was Albert Einstein, a foreign-born Jew with 16 communist front affiliations.”

We read: “The first commissioner of the Atomic Energy Commission was David E. Lilienthal, a Jew, who belonged to at least two communist fronts. He remained in that position for a considerable length of time.” [1]

Niels Bohr [Danish born Jew], given the Nobel Prize in 1922, escaped Denmark in 1943. “In September 1943, reliable word reached Bohr about his imminent arrest by the German police; the Danish resistance quickly managed to help Bohr and his wife escape by sea to Sweden. Soon after, Bohr was flown in a military aircraft to Britain. There he was introduced to the then-secret atomic bomb project. Eventually he was directed to the project’s principal location in the United States of America. Bohr worked on the Manhattan Project at the top-secret Los Alamos laboratory in New Mexico, where he was known by the name of “Nicholas Baker” for security reasons.” [2]

“It is of utmost significance to point out that both atomic bomb and hydrogen bomb were in large measure a Jewish production. But basically the atom bomb and its further proliferation, is a Jewish idea. One of the central figures in not only laying the theoretical groundwork but also persuading President Roosevelt to launch the whole atomic bomb program was Albert Einstein, a foreign-born Jew with 16 communist front affiliations.”

“It was at this time that most of the Atomic secrets were stolen and passed on to the Soviets. When it comes to listing the spies and traitors involved, it almost reads like a Jewish Who’s Who. The most notorious were Julius and Ethel Rosenberg, who were tried and executed for treason, the only traitors in modern U.S. history to have suffered this fate. Further involved in this spy network were Harry Gold, Abraham Brothman, David Greenglass, [Ethel Rosenberg’s brother], Israel Weinbaum, Miriam Moscowitz, Sidney Weinbaum, Morton Sobell. All these were Jews, and all were convicted of treason.

“It is significant that in the further development of the hydrogen bomb, Jews were again in the forefront, men such as J. Robert Oppenheimer, Steve Nelson [real name Joseph W. Weinberg] and Edward Teller.”

LD: The mad scientist in the 1964 cult movie “Dr Strangelove”, directed by Stanley Kubrick, was based on Jewish scientist Edward Teller.the-men-of-the-manhattan-project-5-638 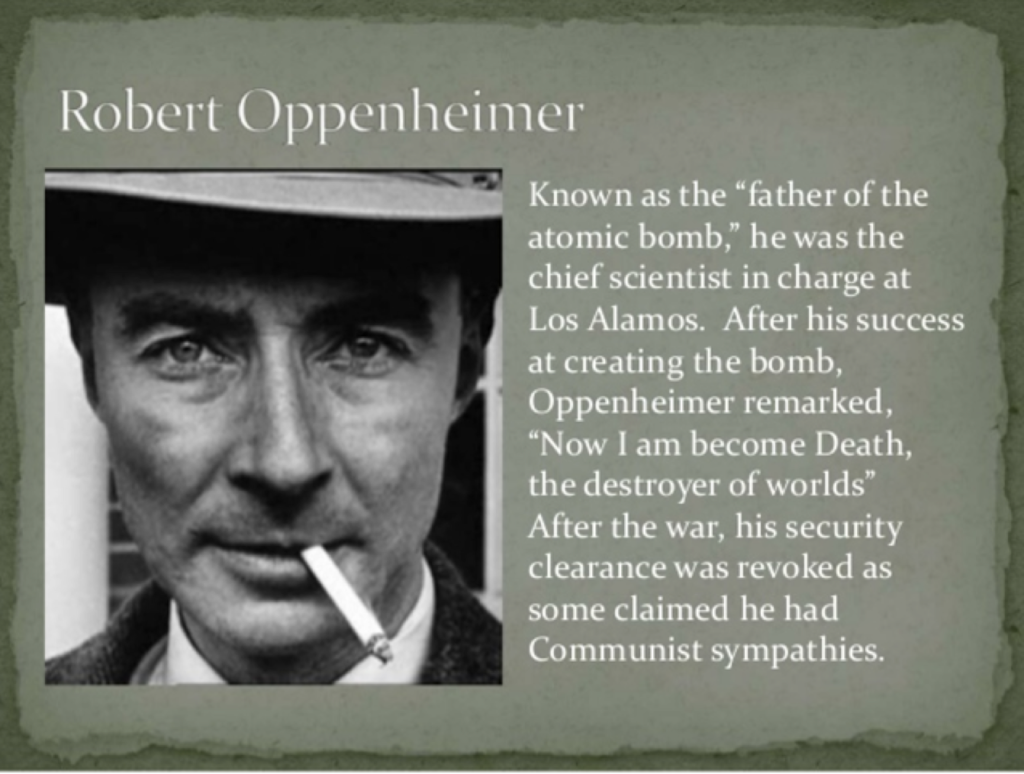 “To get on with the crux of our dissertation, namely the commercial and industrial proliferation of nuclear wastes in the United States, this more than any other issue hangs like an ominous pall over our heads. It threatens to bring death, cancer, leukemia, and birth defects to the mass of the population, and, in fact, exterminate humanity itself.”

“It is of utmost significance to point out that the Jewish network has kept close control of the development and proliferation of this most devastating of all technical achievements – nuclear fission and nuclear fusion.” [4]

LIST OF JEWS ASSOCIATED WITH THE DEVELOPMENT OF THE ATOM BOMB

David Bohm [American Jew] – Performed theoretical calculations for the Calutrons at the Y-12 facility in Oak Ridge, used to electromagnetically enrich uranium for use in the bomb dropped on Hiroshima in 1945.

SOURCE (link no longer working but info can be found at web archive… http://hailtosatansvictory666.angelfire.com/therealholocaust/the-inventors-of-the-atomic-bomb-all-jews.html

THE REAL HOLOCAUST
The Inventors of the Atomic Bomb: ALL JEWS
World Jewish Congress Declared War on Germany Long Before Germany Took Any Action Against Jews
The Bombing of Dresden: An Act of Genocide
Hiroshima & Nagasaki: A Jewish Experiment
Genocide IS and Always Has Been a Jewish Ideal
The PHONY Holoco$t The “Six Million” LIE
2000 Years of Jewish Ritual Murder
The Threat of Israel Today