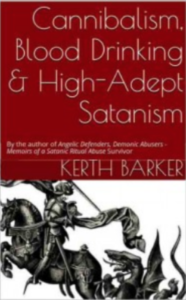 If you are one of the many people who would like to understand the inner workings of the satanic Illuminati, Kerth Barker’s books are a must read. Kerth is a survivor of satanic ritual abuse. In his first book, Angelic Defenders & Demonic Abusers: Memoirs of a Satanic Ritual Abuse Survivor, Kerth describes his personal experiences of being forced into a pedophilic prostitution ring where, as a child, he was programmed to sexually service high-level Illuminati members and initiates. Some of the sexual acts he was forced to perform were photographed and/or filmed. These photos and films were not only sold for extremely high prices, but were also used to blackmail politicians and other public servants in order to get them to acquiesce to the mandates of the Illuminati.

Kerth is a victim of trauma-based mind-control. As a child, he was exposed to some of the most horrendous and harrowing experiences known to humankind. As a means of grooming him to become part of organized satanism, Kerth was repeatedly tortured and traumatized and made to split into two separate personalities – one a mundane Christian named Kerth and the other a female satanist named Kathy. Kathy was the cross-dressing “girly-boy” that attended satanic rituals and performed sexual acts for her/his Illuminati “owners.” Kerth was the “normal” Christian boy that attended school regularly and went to church with his family on Sundays.

Kerth describes in some detail some of the torture and manipulation that he was subjected to in order to get him to split into two personalities. He also describes some of the insane activities that he was forced to participate in as a child. This book leaves no doubt that there are seriously perverted and wicked individuals at the top of the Illuminati pyramid and they have no moral conscious or any feelings whatsoever about the trauma and violence they inflict on other people, especially children.

Thankfully, Kerth finds powerful non-satanic human and angelic allies as he moves through childhood and into adolescence. These allies help him break away from the satanists and they introduce him to a special form of therapy – called Fabian Therapy – that ultimately helps him reclaim his memories, his mind, and his soul. Kerth now works furiously to expose the Illuminati and to help free those who are wanting to get out.

In his second book, entitled Cannibalism, Blood Drinking, and High Adept Satanism, Kerth takes us on a journey into the underworld of satanism and into the depths of depravity that some satanists are capable of. It is here that we meet two incestuous, inbred sisters who are not only proud of the fact that they are “aristocratic cannibals,” but whose home is a virtual prison compound where they keep slaves and brain-dead, inbred servants who are forced to cater to their every whim. Kerth describes in some detail the sisters’ penchant for consuming human blood and body parts, as well as the cruelty, violence, and depravity of these extremely insane “people.” He also shares insider information regarding the fact that these two psychopaths serve the Illuminati by working in positions of importance within the United Nations.

In Book 2 we also learn that some members of the Illuminati have an addiction to adrenalized blood drinking. This addiction forces them to kidnap and torture their victims before they murder them and drink their blood. Kerth has compassion for these very damaged people and he has been trained in a special form of therapy that can help blood drinking addicts recover from their addiction.

Kerth also shares a few revelations about high-adept satanism and the fact that many of these people DO NOT engage in cannibalism or blood drinking but rather manipulate people through hypnotism and well-developed methods of psychic control. Kerth came very close to being a victim of one of these high-adept satanists, but with a little help from his allies in the heavenly and earthly realm, he was able to break the spell and ultimately break free from the satanists for good.

Reading between the lines in these books one can discern that satanism derives much of its power and tenacity from carefully constructed networks of mutual blackmail and self-perpetuating inter-generational patterns of child abuse that often parasitize the families of its practitioners. In that respect satanists are hardly in control of their own lives – they are more like cogs in a machine than free individuals. Unfortunately, these machines can, and have been, programmed to do some very nasty things. And this includes attempting to destroy the world and, if necessary, taking themselves out with it. There is no sanity to their logic or their behavior. It is completely depraved.

Be forewarned that some of the material in Book 2 is extremely hard to read and I am quite certain that, for Kerth, it was very hard to write. Yet for all of us, The Truth remains that if we hope to overcome the psychopathy and evil that now grips our planet and threatens all of life, we must understand the enemy and know how they work. I think we owe Kerth an enormous debt of gratitude for coming forward with this information and I trust that many will find what he shares invaluable.

Two thumbs up from my end. These books are a must-read! For more information, please visit http://angelicdefenders.theshamecampaign.com/

Here are a few testimonials from our readers about Kerth’s first book:

I have read the entire book on satanism this night through, in one go. I could not stop reading. It was so well written and so easy to understand – it could not be done better, I am sure.

I cried on the last pages but not from sadness, but from empathy with all those people who work to help others and for the people trapped in this system, who don’t really want to be there and I hope all this can end so we can all flourish and have better lives. I also understand that the satanists are not happy people and that one could feel sorry for them if they had not done so many horrific actions.

OMG this is an amazing book. Very well written and rings very authentic. Gonna recommend this one to many. Deserves the widest audience possible.
Thanks very much.

Just follow this link for more information about Kerth’s books.

Here is an excerpt.

“…I noticed that the Baron kept on slyly glancing about the house as we walked through it. When we strolled by some windows that looked out into their backyard, I noticed a strange sight. It looked as if the backyard was caged in. There was wire mesh that covered all the sides of the backyard. And there was wire mesh on top. Inside the caged in area, there were swings, a picnic table and some other things that you might expect children to use.

Bernie explained, “That’s the play area for our slave girls. We can’t expect them to work all the time.”

Nancy went on, “But they’re too precious to us, so we can’t let them escape. We have to protect them from the outside world.”

I noticed that many of the windows had bars on them which were hidden by the curtains in front of them. I realized that this home was like a prison or a bank. It was all locked down. And that meant that the Baron and I were locked in it as well. But the Baron seemed unafraid, and so I kept on smiling.

The two sisters said that they were about to eat lunch and invited us to join them. The Baron said that we would be delighted to sit with them, but that we had already eaten. We entered the dining room and sat together at the dinning table. The whole house was filled with beautiful old antique furniture. The paintings on the wall were quite tasteful and beautiful as well. The dining room table had a red lace tablecloth of a unique design. It looked like it was made of little lace roses. Everything on the table was silver. The plates, cups and bowls were all silver.

A maid and cook, both dressed in white, served the food as we sat at the table. Both the maid and cook had the same family face as the two sisters, only these servants were shorter and seemed slightly retarded. But the family resemblance was unmistakable. It was explained by the two sisters that their servants were all second cousins from the poorer side of the family. The cook and the maid showed no emotions at all as they served, and they expressed no personality.

The main dish was a meat plate. It was served on an oval silver platter. It was all very strange looking. It was made up of small slices of different types of meat that were garnished lightly with what looked like catsup. It had all been shaped to looked sort of like a rose. The two sisters explained what it was. They said that the meats were pork, chicken, turkey, venison, beef, goat and human flesh. These different meats had all had been chopped up and mixed together with spices. And once shaped into this floral form, they had been garnished with a mixture of catsup and human blood. As the two sisters explained this, I had no doubt that they were telling the truth. Although I had a smile rigidly fixed upon my face, I could not have felt more sickened by the meat plate in front of me than if it had been a plate of dog crap.

There was a small bowl of vegetables next to the meat plate, but for some reason the vegetables seemed just as disgusting. The cup of tea and glass of water felt suspect as I glanced at them. So I had no trouble obeying the Baron’s mandate that I should eat or drink nothing while in this house.

The two sister explained where they got their “human cattle” meat. They said that once a year they “harvested” a family of migrant farm workers…

The way that the two sisters ate their meat was peculiar. They used their forks for the vegetables and their spoons for the tea, but they picked away at the meat plate with their fingers. They held the silver platter containing the meat with one hand, very daintily with the little finger held up. And they held their meat plates up near their mouths. They periodically sniffed at the meat and moaned with pleasure at its smell. The other hand was used to pick at the meat. Each sister would carefully pick up a small piece of meat and place it gingerly on her own outstretched tongue. Sometimes they would feed each other in this way.

As they were eating the meat, they would say things like, “Mmmm. This is so-oo delicious. Ohhhh, this is so-oo tasty.”

When they had eaten all of the meat off of the silver platter, they then licked off the red blood-catsup garnish that was left on it. They licked until the meat plate was clean. Even the Baron, who was usually unaffected by any event he witnessed, winced at this display. I sat with a smile robotically fixed on my face, my back straight and my purse on my lap. But it took all of my concentration to keep myself from vomiting as they ate in this way…”

CHECK OUT THE BOOKS HERE