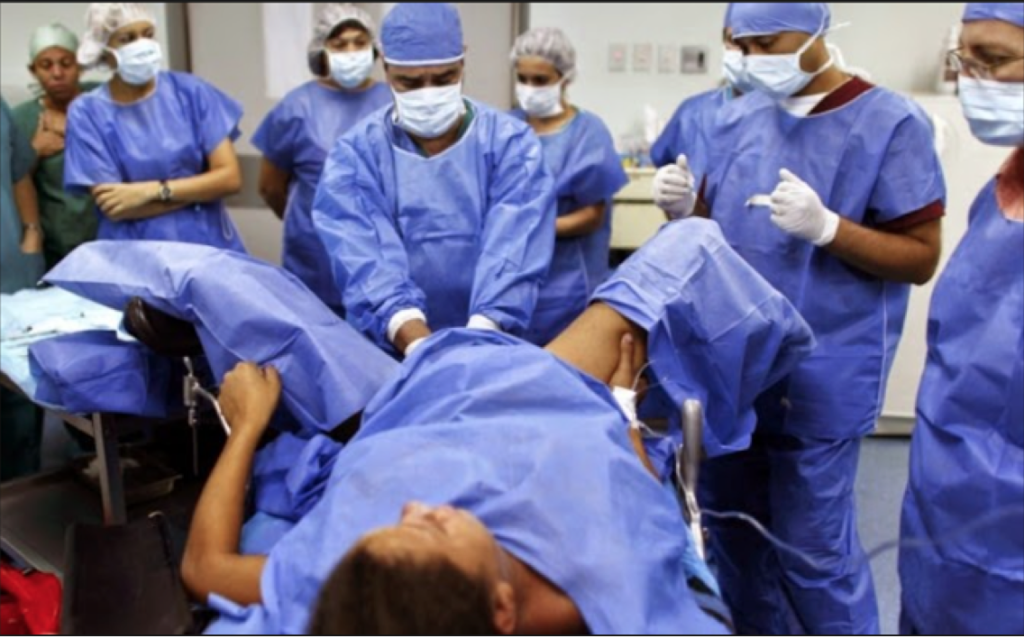 Hey ladies — isn’t that a wonderful birth position for the convenience of the voyeurs? Look how many strangers are in that room. May as well invite in the janitor too and make it a party.

But seriously, what people need to understand is that the real reason doctors force women into this sick lithotomy position that narrows the pelvis, cuts off the baby’s oxygen supply, and forces the baby to birth itself against gravity, is because EVERYTHING the medical system does is designed to purposefully traumatize the child and cause pain for both mother and child and thereby undermine bonding and ensure birth trauma. It’s methodical. No accident. The people who create these insane protocols know exactly what they’re doing and they do it all for diabolical reasons.

Women who are forced to birth in this position have an increased chance of ending up with a c-section and/or having their babies pulled out with forceps or sucked out with a vacuum. Of course, the scissor-happy, knife wielding surgeons are more than happy to cut open women’s bodies, rip babies from their mother’s womb, and even cut off infant body parts, just to name a few (see my many posts on circumcision in this blog). Naturally, there are shekels to be made and most medical “professionals” would be hard pressed to give up such great opportunitie$ to make money.

For the record, ALL medical interventions during the birth process cause trauma. That includes immediate cord clamping which cuts off baby’s oxygen supply, deprives baby of 1/3 of his/her blood, deprives baby of vital nutrients and stem cells, and ruthlessly cuts baby off from his/her placenta. Cord clamping is extremely violent and involves theft of the infant’s cord blood and placenta, which are sold to the highest bidder for more shekels.  Often the highest bidders are satanists that get off on the consumption of infant blood and body parts.

Hospitals are Luciferian temples of the occult. Protect yourself and your children. Avoid these places like the plague.

OBs are routinely closing birth canals up to 30%. It’s easy to allow your birth canal to OPEN the “extra” up to 30% – just roll onto your side as you push your baby out – BUT BEWARE – see “Just Beware” at the end of this post.

“The most widely used and often the most satisfactory…[delivery position] is…dorsal lithotomy… in order to increase the diameter of the pelvic outlet.” [Williams Obstetrics 2001:316]

The authors of Williams Obstetrics KNEW this was a bald lie when they published it – because – beginning in 1993 – at my request – they published the simple grisly biomechanics too:

“[T]he increase in the diameter of the pelvic outlet occurs *only* if the sacrum is not forced anteriorly by the weight of the maternal pelvis against the delivery table or bed.” [Williams Obstetrics 2001:55] 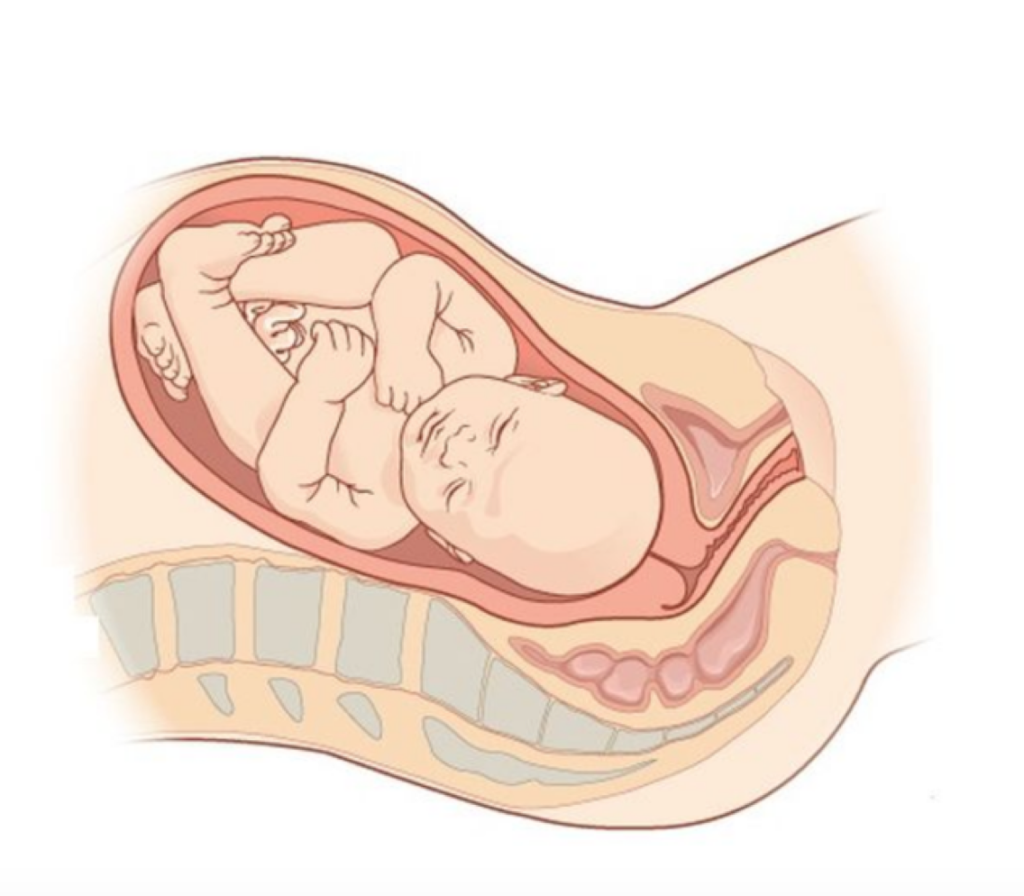 The graphics show how the sacrum and tailbone being pushed upwards while lying on the back or if in a semisitting position partially obstruct the birth passage. 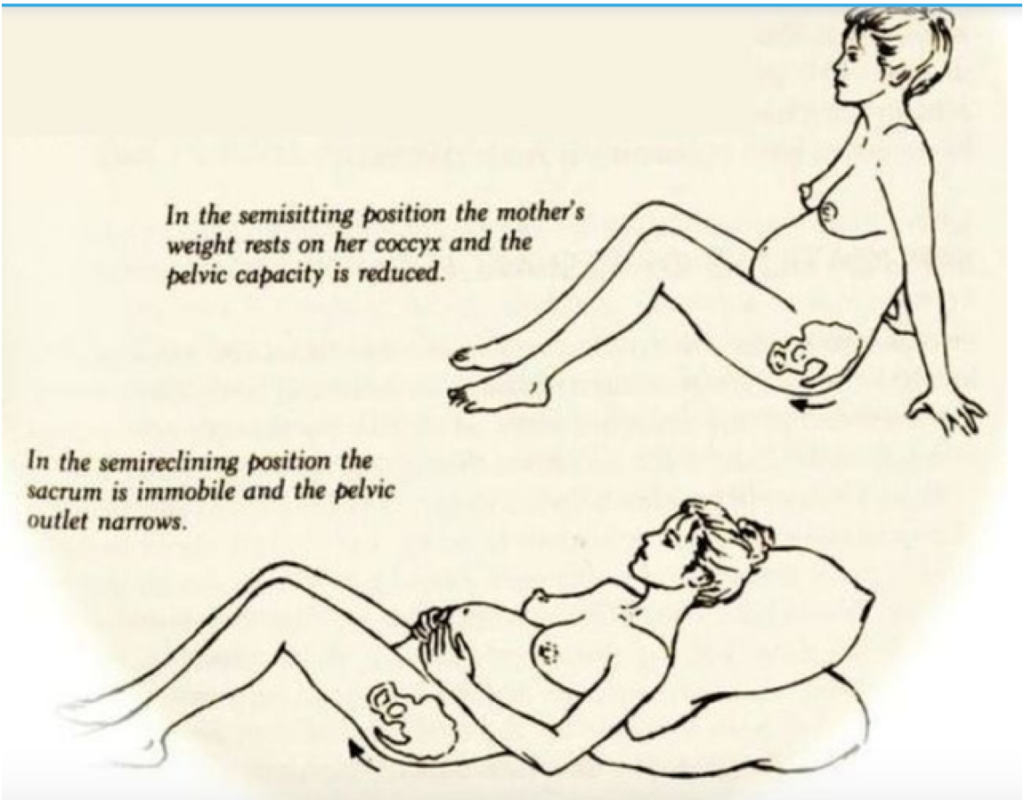 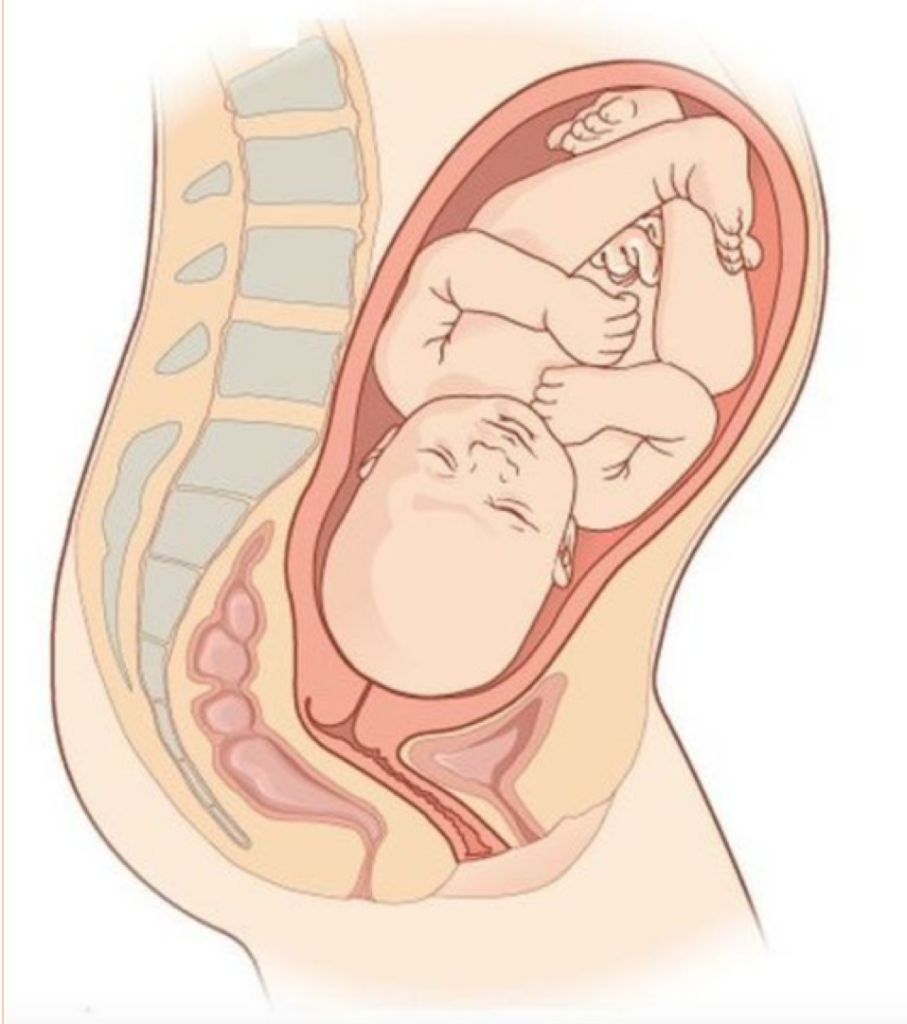 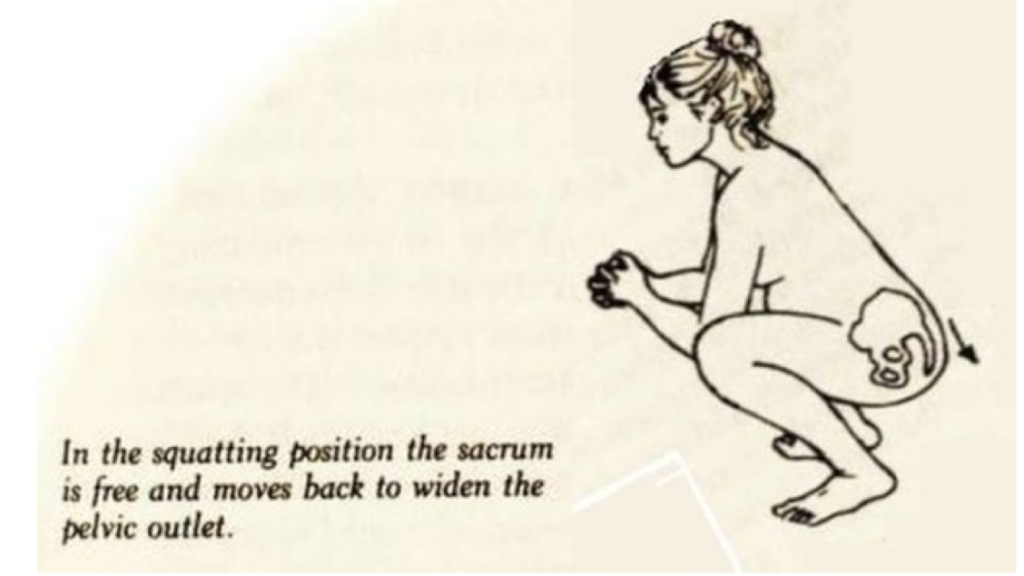 Dorsal lithotomy – also known as the “dorso-sacral” position – forces the sacrum anteriorly – CLOSES the pelvic outlet up to 30%.

Semisitting – another common medical delivery position – also forces the sacrum anteriorly and closes the pelvic outlet up to 30%.

OBs are KNOWINGLY closing birth canals up to 30% and KEEPING birth canals closed when babies get stuck – and LYING to cover-up. See the Four OB Lies below.

Some babies die – some get paralyzed – most “only” have their spines gruesomely wrenched.

ALL spinal manipulation is gruesome with the birth canal senselessly closed up to 30%.

Note also: OBs are slicing vaginas/abdomens en masse (episiotomy/c-section) – surgically/fraudulently inferring they are doing/have done everything possible to OPEN birth canals – even as they CLOSE birth canals – up to 30%.

This is massive criminal negligence that sometimes escalates to criminally negligent homicide. C-section increases the odds that a mother will die. Also, some babies die – and MDs indirectly admit that closing the birth canal FAR LESS than 30% can KILL.

As usual, I am in favor of pardons in advance for MDs. As med students, MDs are TRAINED to perform obvious felonies. (See the Bonus Bizarre Williams Obstetrics Factoid below.)

(Note: The 2005 edition of Williams Obstetrics is due out next month, according to the employee at Barnes and Noble with whom I spoke.)

OB LIE #2. After Ohlsen pointed out in 1973 that pelvic diameters DO change – the authors of Williams Obstetrics began erroneously claiming that their most frequent delivery position – dorsal – widens the outlet.

OB LIE #3. After I pointed out in 1992 that dorsal CLOSES – and so does semisitting – the authors of Williams Obstetrics – put the correct biomechanics in their 1993 edition – but kept in their text (in the same paragraph!) – the dorsal widens bald lie that first called my attention to their text…

OB LIE #4. OBs are actually KEEPING birth canals closed when babies get stuck – and claiming they are doing everything to allow the birth canal open maximally. (ACOG Shoulder Dystocia video – also forceps and vacuum births are performed with the mother in lithotomy.)

I noted some of the OB lies in an Open Letter to the FTC years ago…
http://home1.gte.net/gastaldo/part2ftc.html

MDs are violating AMA’s Principles of Medical Ethics, failing to strive to expose the OB fraud and deception, as in,

“[AMA p]hysician[s] shall…seek changes in those requirements which are contrary to the best interests of the patient.”

SO WHY ARE OBs STILL NARROWING PELVIC OUTLETS??

Immediate cord clamping temporarily asphyxiates babies and robs massive amounts of blood from them and is likely causing some cases of autism and cerebral palsy, according to retired obstetrician George Malcolm Morley, MB
ChB, FACOG. (See quote below.)

“If after delivery, the infant is placed at or below the level of the vaginal introitus for 3 minutes and the fetoplacental circulation is not immediately occluded by clamping the cord, an average of 80ml of blood may be shifted from the placenta to the infant…Our policy is to clamp the cord after first thoroughly clearing the airway…which takes about 30 seconds.”
(Williams Obstetrics 2001:319-320)

This bizarre ROUTINE treatment of “every cesarean section baby” may cause some cases of autism and cerebral palsy, according to retired obstetrician George Malcolm Morley, MB ChB FACOG:

“ACOG‘s routine treatment (B138) of these depressed neonates is immediate cord clamping to obtain cord blood pH studies. The child’s only functioning source of oxygen – the placenta – is amputated together with 30% to 50+% of its natural blood volume. Total asphyxia is imposed until the lungs function, and the depressed (asphyxiated, hypovolemic) child starts its extra-uterine life in hypovolemic shock…

“B138 was first published in 1993. Every cesarean section baby, every depressed child, every preemie, and every child born with a neonatal team in the delivery room has its cord clamped immediately to facilitate the panicked rush to the resuscitation table. The current epidemic of immediate cord clamping coincides with an epidemic of autism.

“For the trial lawyers, it is essential that the ‘true genesis’ of cerebral palsy remains unknown, because that ‘true genesis’ (B.138) is a standard of medico-legal care…”
http://www.cordclamping.com/acog-cp.htm

I will cc Oregon attorney general Hardy Meyers again (hardy…@state.or.us) – but nothing will likely happen as the medical profession and the legal profession have created the medico-“legal” “just us” system – babies be damned. (I will also cc Disneyland DA Tony Rackauckas – his campaign manager was chiropractic attorney Michael Schroeder, a former California Republican Party Chairman who mail still be an Orange County deputy sheriff.)

To offer your baby the “extra” up to 30%, just roll onto your side as you push your baby out – or use just about any other alternative delivery position…

JUST BEWARE: Some OBs will let women “try” alternative delivery positions but will move them back to semisitting or dorsal (and so close their birth canals the “extra” up to 30%) for the actual delivery.

And remember: When babies get stuck, OBs routinely KEEP birth canals closed the “extra” up to 30%.

PS1 My thanks to Donna Young for calling my attention to the immediate cord clamping child abuse.

PS3 It is important to note that allowing the birth canal to open the “extra” up to 30% will NOT prevent all c-sections and operative deliveries – but it will likely prevent some. MDs have no business closing birth canals
let alone lying to cover-up. Attorney generals have no business ignoring the grisly mass child abuse.

– Birth Trauma and the Dark Side of Modern Medicine – Jeanice Barcelo
http://www.vaccinationinformationnetwork.com/birth-trauma-and-the-dark-side-of-modern-medicine-jeanice-barcelo/

Squatting also happens to be the ideal position for birth. Lying down to give birth is a very recent “innovation” due to the replacement of midwives with doctors in the last century. Lying flat for birth reduces blood flow to baby and placenta, increasing the risk of fetal distress, whereas squatting maximizes the spaces between the pelvic bones and puts pressure on the cervix. Unfortunately, after a life time of sitting and wearing heels, most women cannot maintain a squat without extensive exercise.

10 Reasons To Not Give Birth On Your Back
http://trimestertalk.com/10-reasons-give-birth-back/

– Best Birth Positions (It’s NOT what you think!)
http://www.belliesinc.com/best-birth-positions/

101 Reasons Not to Have Your Baby in a Hospital – Jock Doubleday
http://www.vaccinationinformationnetwork.com/101-reasons-not-to-have-your-baby-in-a-hospital-jock-doubleday/

– The Importance of Declining the Hepatitis B Vaccine On Your Birth Plan
http://www.vaccinationinformationnetwork.com/the-importance-of-declining-the-hepatitis-b-vaccine-on-your-birth-plan/