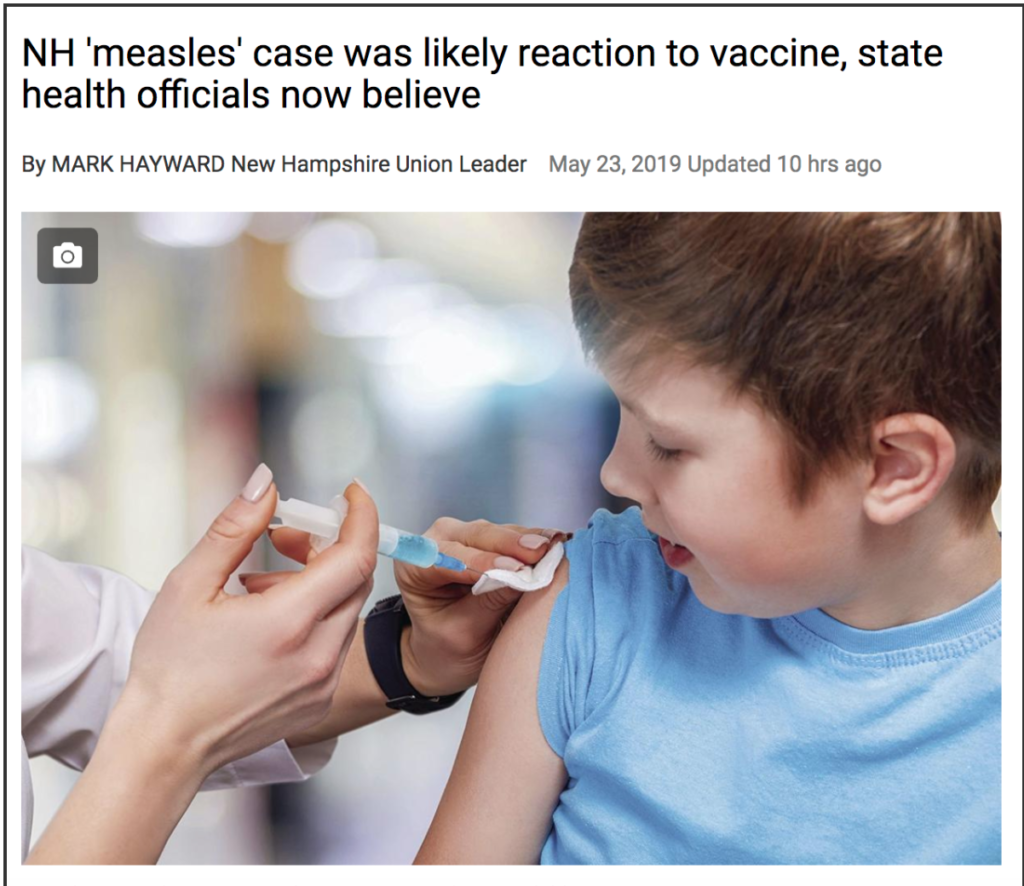 How many measles cases like this one reported in New Hampshire, and acknowledged by the Department of Health and Human Services, are caused by the MMR vaccine, yet blamed on the unvaccinated?

A case of falsely identified ‘measles’ caused by the MMR vaccine, reported in the New Hampshire Union Leader, is receiving attention for revealing something health authorities and the mainstream media normally unilaterally deny: the newly vaccinated sometimes express symptoms identical to the disease they believe the vaccine prevents.

The report describes the case as follows:

“The Keene-area child believed to be infected with measles was probably experiencing a reaction from the measles vaccine, and the public is not at risk of a measles outbreak, state health officials said.

Earlier this week, state officials said that the child had visited a church and school in the Keene area and warned that those near the child were at risk of exposure.

It was New Hampshire’s only supposed case of measles, and the news piggybacked on outbreaks in New York and California, where health officials blamed parents who did not immunize children against the disease.

As a result of this discovery, the Department of Health and Human Services  suspended public health warnings and interventions stating, “There is no contagious measles known to be circulating in the community.”

The New Hampshire DHHS also stated in their release that approximately 5 percent of individuals vaccinated with the MMR vaccine develop a fever and rash reaction — symptoms that are indistinguishable from natural measles infection.

In fact, a 2017 reivew on the topic found that MMR induced Vaccine-Associated Rash Illness (VARI) is a common occurrence, and concluded:

So How Do Health Authorities Distinguishs MMR Vaccine Reactions from Naturally-Acquired Measles?

Despite common assumptions to the contrary, health authorities generally don’t distinguish between the two, even though a technology known as PCR genotyping is capable of doing so. Without performing this test, it is impossible to identify and distinguish with any certainty MMR vaccine-induced infection with naturally transmitted and acquired strains, as symptoms of infection by either route can present in clinically identical fashion. Instead, those who express symptoms who are under- or non-vaccinated are routinely blamed for the infection.

Stop Blaming A Failing Vaccine on Failure to Vaccinate

There is also evidence that those who receive the MMR vaccine can transmit it to others (known as secondary transmission). The most well documented example of this is from a 2011 outbreak of measles in NYC where a a twice-vaccinated individual, was found to have transmitted measles to four of her contacts, two of which themselves had received two doses of MMR vaccine and had prior presumably protective measles IgG antibody results. There is another report from 1989which indicates human-to-human transmission of vaccine straine measles.

We’ve covered this case in depth in our article, Measles Transmitted By The Vaccinated, Gov. Researchers Confirm. In that article we also address the problem of blaming a faililng measles vaccine on failure to vaccinate by highlighting the following historical cases (which are not exhaustive) of outbreaks occurring secondary to measles vaccine failure and shedding in up to 99% immunization compliant populations:

These seven outbreaks are by no means exhaustive of the biomedical literature, but illustrate just how misled the general public is about the effectiveness of measles vaccines, and the CDC’s vaccination agenda in general.  No amount of historical ignorance will erase the fact that vaccination does not equal immunization; antigenicity does not equal immunogenicity. Nor are the unintended, adverse effects of MMR and other vaccines in the CDC schedule accurately portrayed, precluding access to the medical ethical principle of informed consent.

To learn more about this topic read my previous article, “The Vaccinated Spreading Measles: WHO, Merck, CDC Documents Confirm,” and visit our Measles research database.