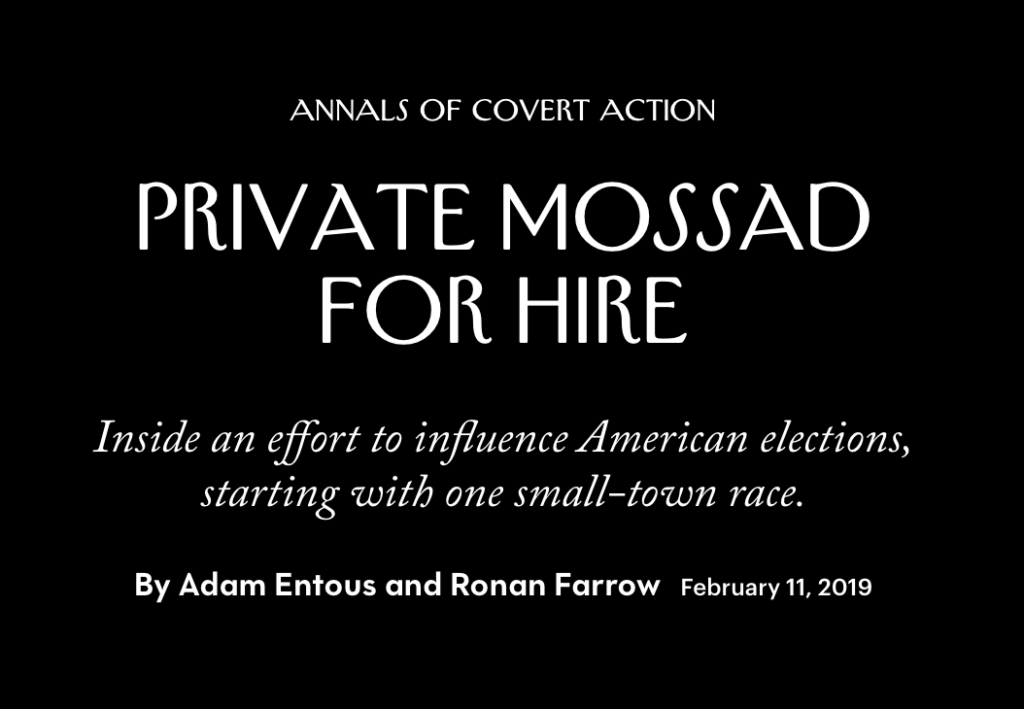 The title of a New Yorker article dated February 11, 2019

An spy company staffed by Jews from Israel attempted to influence a local US election as part of a larger attempt to infiltrate American politics, a report in The New Yorker magazine has revealed.

The Jews used fake websites, social-media posts, and staged interactions as part of an effort to influence the public perception of specific targets, the report said.

In addition, the group tried numerous times to work with Donald Trump’s campaign in 2016 and engaged in other efforts that targeted the US State Department.

Psy-Group, a defunct private intelligence agency staffed with former Israeli spies, attempted to influence at least one local US election and other domestic affairs, according to a report from The New Yorker‘s Adam Entous and Ronan Farrow.

The company even courted President Donald Trump’s 2016 campaign and is now under investigation by the special counsel Robert Mueller, the report said.

The company attempted to pitch to the Trump campaign through advisers Newt Gingrich, Jared Kushner, and Donald Trump Jr., but was eventually rebuffed by the campaign’s digital director, Brad Parscale.

But according to the report, Psy-Group wasn’t finished there. The company went on to use fake websites, online avatars, and staged in-person interactions as part of an effort to influence the results of local elections or change the perception of certain events in the US, at the behest of a series of “private clients.”

The revelation shows that the disturbing efforts to influence US elections weren’t limited to the 2016 presidential election and that state actors weren’t the only perpetrators.

The Tulare Local Healthcare District board election in Tulare, California, in 2017 was the primary subject of Farrow and Entous’ investigation and was the focus of a $230,000 campaign by Psy-Group.

Psy-Group was paid by the physician Yorai Benzeevi, who ran the Tulare hospital, to conduct “a coordinated intelligence operation and influence campaign” that would stop a recall bid on the board member Parmod Kumar, according to The New Yorker.

Psy-Group, owned by the wealthy, well-connected Israeli son of a mining magnate, dug up information on the opposition candidate, Senovia Gutiérrez, and smeared her on a series of newly created websites, including Tularespeaks.com, Tulareleaks.com, and Draintulareswamp.com, The New Yorker report said.

According to Gutiérrez, in-person operations were conducted as well. She said that one day, a stranger knocked on her door and handed her an envelope while someone standing next to an SUV across the street was taking pictures. The pictures reportedly ended up online accompanied with accusations of bribery.

The day before the election, Gutiérrez’s son’s house burned down. He suspected foul play, but authorities said there wasn’t evidence to support that, The New Yorker report said.

According to the report, the campaign prompted Psy-Group to pitch more than 50 other political groups and campaigns at similar price points, but nothing stuck.

But the one election wasn’t the full extent of their activities.

Psy-Group’s other notable domestic campaign, according to the report, was its effort against student activists who were part of the Boycott, Divestment, Sanctions movement, which calls for international economic pressure against Israel over human-rights abuses against Palestinians.

The report said the campaign’s architects were Ram Ben-Barak, who was previously a deputy director of Mossad, and Yaakov Amidror, the former national security adviser to Israel’s Prime Minister Benjamin Netanyahu.

Psy-Group’s attempts to bring on new clients were largely unsuccessful, according to The New Yorker‘s report — hence the company’s eventual demise. But while it was around, it had courted the Trump campaign and the US State Department.

Additional reporting from The New York Times indicated that Psy-Group’s pitch reached the highest levels of the Trump campaign. In 2016, the company was connected to the Trump organization through Rick Gates, a longtime associate of Trump’s jailed former campaign manager, Paul Manafort, who was second in the pecking order behind Steve Bannon.

After drafting a plan that featured social-media tactics, most likely involving avatars and fake profiles judging from Psy-Group’s other activities, Newt Gingrich passed the company on to Jared Kushner, who then passed the pitch along to the campaign’s web director Brad Parscale who reportedly declined their services.

Psy-Group’s owner, Joel Zamel, got together with Trump representatives one more time, according to The New Yorker‘s report, meeting with Donald Trump Jr. and Erik Prince (the brother of Education Secretary Betsy DeVos) at Trump Tower to pitch the company’s services. Nothing came of the meeting, the report said.

For another failed pitch to the US State Department, Psy-Group reportedly attempted to illustrate its effectiveness in creating fake social-media avatars on Facebook. To do this, they created a false profile in the image of an American teenager named Madison who had a Christian background but also had a demonstrated interest in Islam on her profile.

Using the profile, the Psy-Group had the avatar recruited and converted by two imams. The process included a Skype prayer recitation. The operation was terminated after Madison was invited by an ISIS fighter in Raqqa to become his bride.

“We are looking at the tip of the iceberg in terms of where this can go,” a former Israeli private intelligence worker reportedly told The New Yorker.