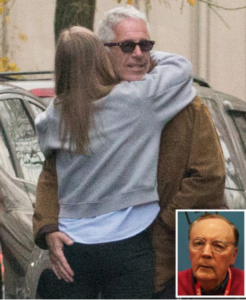 This just in… Jeffrey Epstein had a deformed penis.  See excerpt below.   Was this a result of a botched circumcision?  Or was he exposed to some other kind of satanic ritual abuse as a child that ended in him having a deformed penis?

Botched circumcisions are extremely common and many victims end up with revision circumcisions and sometimes a deformed penis as a result.   Many circumcised men cannot get a full erection because too much foreskin was removed and they experience pain if the penis become erect.  Still others have bent, curved, or crooked penises.  And there are many other types of wounds.

Interestingly, the transgender movement got its start with a botched circumcision.  An innocent child who was born a twin had his penis mangled by a medical sadist during the circumcision “procedure.”  A deranged jewish doctor calling himself “John Money” then decided to take things one step further and mangle the boy’s mind as well.  He convinced the boy’s parents to allow them to cut off what was left of the boy’s penis, put in a fake vagina, and thereafter raise the boy as a girl.  This is a quick video describing what happened.

The boy ended up killing himself as a young adult which gives us insight into the horror of what the transgender movement is doing the psyche of our children.

Not surprisingly, John Money worked closely with Alfred Kinsey, the sadomasochist pedophile that hung himself by his balls from a basement ceiling pipe and had it filmed for his pornography collection.  Kinsey was instrumental in triggering the “sexual revolution” in America and, together with Hugh Hefner, (who conveniently released Playboy magazine exactly the same time Kinsey’s research was being published), these jew-controlled luciferians were able to turn the sexual mores and attitudes of the American people on their head.

John Money’s “research” is now kept at the Kinsey Institute at the University of Indiana.  Kinsey died from a disease of the testicles after years or orgiastic self-abuse.   Here is a talk from the Free Your Mind Conference that describes the path the jews took to corrupt the American people, which has reached its zenith at this time.  Below that is an excerpt that describes both Epstein’s deformed penis and his mangled mind.

A girl of 14 got into a fight at school with another pupil who called her a ‘whore’.  Let’s call this girl Mary. Like about a third of the children at this Florida county high school, she’s from a Hispanic background. Her parents are poor Cuban immigrants. Mary qualifies for free school lunches.

But when she is sent to the principal’s office, Mary is found to have $300 in her purse. The notes are all $20 bills. Alarmed, the head teacher calls her parents and asks: ‘Is Mary selling drugs?’ Her family can’t believe that, but the school needs to know what’s going on. So they send for the psychologist. And then Mary starts talking.

The story she tells is so sickening that the school staff have no hesitation in calling the police. In a high, halting voice, speaking through tears, Mary tells Palm Beach police officer Michele Pagan that she was taken to Epstein’s house. She won’t say who took her, or why she agreed to go. But she is adamant about what happened when she was led upstairs.

‘This white-haired guy came into the room. Wearing only a towel around his waist. He took off the towel. And then he was all naked and he lay face down on the massage table.’

In a stern voice, the man ordered the young girl to remove her jeans and sit astride his back in her panties, with her buttocks against his. Then he pleasured himself. Afterwards, he produced a purple sex toy and touched Mary with it. For this she was paid $300.

Six months later, a young woman was arrested for possession of a small amount of marijuana. Let’s call her Alison: it’s not her real name. She, too, has a disturbing story to tell about 358 El Brillo Way. It began at the clothes store Hollister in Wellington Green mall, where Alison was working for six bucks an hour as an assistant, aged 16.

Another of the girls told her she could earn $200, just for giving an old guy a massage in his home.

‘She said that he wanted cute girls, so I looked cute, did my best. Like, this guy’s not going to pay you for not letting him cop a feel or nothing. I wasn’t naive enough to think that.’

She was introduced to a woman who called herself Sarah. Alison thought Sarah was some sort of live-in personal assistant. Later, she revised that opinion. Sarah seemed to be a willing sex slave.

The ‘old guy’ demanded a massage, and cajoled Alison into stripping to her underwear and allowing him to grope her. Afterwards, she agreed to return: ‘$300 for 40 minutes, that was a lot.’

Alison insists that she always refused to have full sex with Epstein. On one occasion when he did force himself on her, holding her head down on the massage table she screamed ‘no!’ and he stopped.

In any case, she claimed, her abuser rarely wanted conventional sex. Perhaps that was because his genitals were apparently deformed.

One witness later described Epstein’s penis as ‘egg-shaped’, but Alison was more specific: ‘He’s circumcised, and he has some sort of birth defect. [His penis is] really weirdly shaped, like a teardrop, like a drop of water . . . ’

As Alison consented to ever more depraved sex acts, Epstein’s rewards became more lavish. ‘He used to tell me I was his favourite. I’d go over there and there’d be a bag of Victoria’s Secret underwear, like $1,500 worth. I got a plane ticket once. I got a car, I got Christmas bonuses, I got movie tickets. He wanted me to come and live with him as a girlfriend, sex slave, whatever you want to call it.’

She began to bring other schoolgirls to visit him. ‘I brought girls I didn’t like and, frankly, did not give a f*** about. Girls that I knew would do anything. I’d just hear a rumour about a girl and be like, “Hey, I know a way you can make $200.” I would tell them flat out, like, “This is what you’ve got to do. Are you cool with this? ’Cause I’m not gonna take you if you’re not.”

Epstein’s demands became violent, picking Alison up by her ponytails and throwing her against the wall before sexually assaulting her. ‘I mean, there’s been nights I left there barely able to walk.’

She visited regularly for two years but eventually became so scared that she handed the car back and broke off contact. She was still at high school.