Things are not looking for the jews, who are being called out on so many fronts and exposed for the filthy manipulators they are. California democrats have drafted anti-Israel revolutions.   According to the article below, one of the resolutions calls for the destruction of Israel as the Jewish state.

Now there’s a resolution I can get behind.

Ahead of state party convention, progressives put forth draft resolutions condemning Jerusalem for stoking anti-Semitism and calling for rollback of Trump Israel policies

Far-left Democrats in California have put forth draft resolutions fiercely critical of Israel ahead of this weekend’s state party convention, including one suggesting that the Israeli government is partly responsible for the atmosphere inspiring last October’s massacre at a Pittsburgh synagogue.

One resolution, first reported by Fox News, calls the murder of 11 Jews by a white supremacist “the culmination of an alarming re-emergence of virulent antisemitism that is a core element of historical and currently resurgent white supremacism in the United States and around the world.” The “Israeli government, along with some of its U.S. backers,” the resolution continues, “welcomed support from Christian fundamentalist and ultra-right groups in the United States and abroad, dangerously ignoring their deeply rooted antisemitism while aligning with their virulent Islamophobia.”

That platform resolution was authored by David Mandel, a state Assembly delegate from the Sacramento area who Fox says holds dual US-Israel citizenship.

“The Israeli government and its supporters here seem to be embracing the right-wing and not caring what they say about anything else — Islamophobia, dog whistles for anti-Semitism,” Mandel told Fox when asked about the Pittsburgh connection. “That, I think, does indirectly lead to some of the violence.”

Other resolutions to be introduced at the San Francisco confab urge a rollback of President Donald Trump’s Israel policies, including recognizing Israel’s sovereignty over the Golan Heights; condemn Israel for clashes with Palestinians in Gaza without mentioning provocations or attacks by the Hamas leadership there; and direct party officials to take a subsidized trip to Israel only if they spend the same amount of time visiting Palestinian communities and leaders as Israeli ones.

Mandel’s resolution opposes “all efforts to stigmatize and suppress support for Palestinian human rights by falsely conflating it with antisemitism.”

The latter is a reference to criticism of Rep. Ilhan Omar, D-Minn., who apologized after fellow Democrats and others said she had invoked several anti-Semitic tropes in her criticism of Israel. 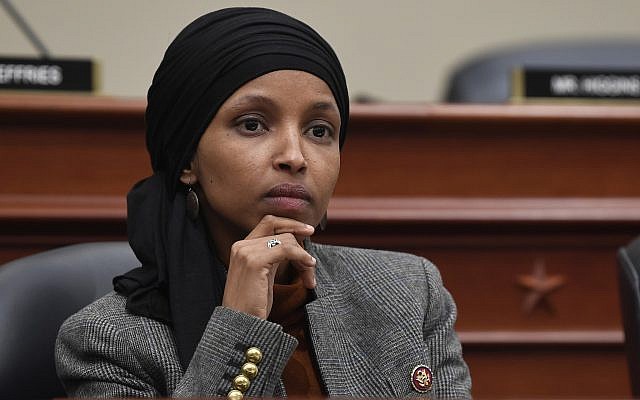 Whether the resolutions will be debated by the full assembly of 3,000-4,000 delegates at the Moscone Convention Center is up to a Resolutions Committee. Delegates have the option of gathering 300 signatures to force a debate on the floor.

The Jewish Democratic Council of America expressed “deep concern” about the resolutions.

“We urge the California Democratic Party not to fall into the trap of letting Republicans divide us on Israel and the fight against anti-Semitism,” Halie Soifer, the council’s executive director, said in a statement. “Nearly all extremist violence in the United States, including attacks on Jews and Muslims, have come from right-wing extremists.”

She added: “While Republicans continue to attempt to turn Israel into a partisan wedge issue, the Democratic Party remains staunchly pro-Israel. The Democratic Platform adopted in 2016 affirms that ‘we will always support Israel’s right to defend itself, including by retaining its qualitative military edge, and oppose any effort to delegitimize Israel, including at the United Nations or through the Boycott, Divestment, and Sanctions Movement.’”

The current California Democratic state platform, adopted in 2018, supports “a solution of the Israeli-Palestinian conflict negotiated by the parties that guarantees equality, security and democracy for all, recognizes Israel’s future as a secure and democratic Jewish state with recognized borders and provides the Palestinians with independence, sovereignty and dignity.”

It also regards Jerusalem as the capital of Israel, but says the relocation of the US Embassy to Jerusalem “should not remove [Jerusalem] from final status negotiations, nor should it be used to undermine the peace process.” 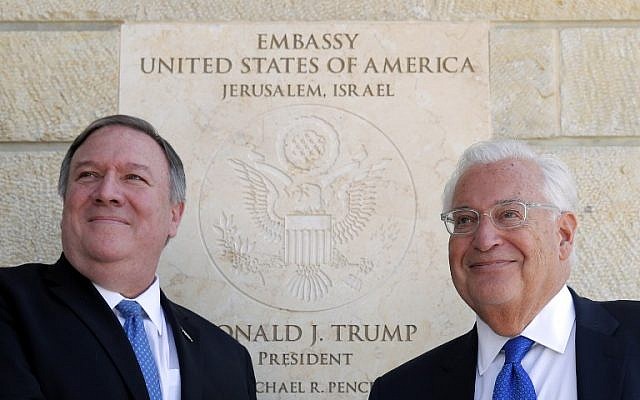 US Secretary of State Mike Pompeo, left, and US ambassador to Israel David Friedman stand next to the dedication plaque at the US embassy in Jerusalem on March 21, 2019. (Jim Young/Pool/AFP)

In 2018, California delegates also adopted two resolutions, neither of which made it into the platform, which were opposed by many in the pro-Israel camp. One opposed federal bills targeting the boycott Israel movement, and the other proposed a federal bill preventing Israel from using US tax dollars to detain Palestinian children.

The Progressive Zionists of the California Democratic Party urged party members to oppose the Israel resolutions.

“These six anti-Israel resolutions divide us rather than bring us together,” the group said in a statement to the Jewish News Syndicate. “They give no care for the human rights, self-determination, and safety of the Jewish people in their ancestral homeland. As they all demonize Israel and hold Palestinian leadership completely harmless, one resolution even calls for the destruction of Israel as the Jewish state.”