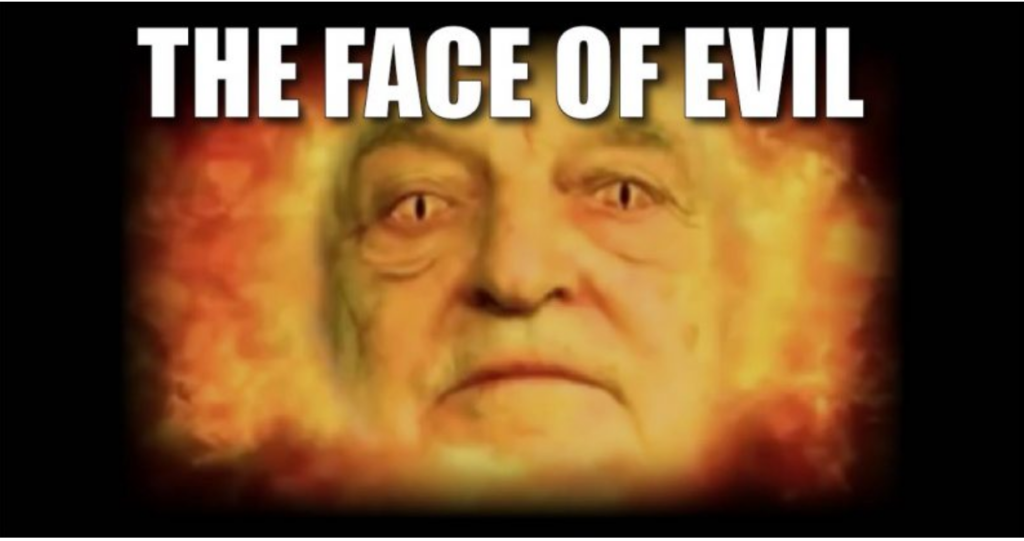 The new anti-Semitism holds that Jews rule the world.
I contribute to that image.
— George Soros, 2003

The biggest conspiracy theory swirling round the pool of conspiracy  theories surrounding George Soros is the one promoted by the elite media and George Soros himself: that Soros is attacked simply because he is a Jew. If you accept this premise, it follows that anyone who attacks Soros is antisemitic, even those who make a point of not mentioning his Jewishness.

Like, for example, the eminently respectable and politically correct Daily Telegraph, which was accused of anti-Semitism in February this year for publishing an article claiming that Soros was behind a “secret plot” to sabotage Brexit. He was doing this, the paper suggested, by trying to reverse the democratic decision of 17.4 million patriotic Brits to leave the EU and reclaim their country’s sovereignty.

Though not a word about Soros being a Jew, let alone an “evil Jew”, was even hinted at in this discreetly worded article, influential Jewish pundits at once began to play the antisemitic card. Thus Stephen Pollard, editor of the Jewish Chronicle, was to claim on Twitter: “This is EXACTLY the language being used by antisemites here and abroad.”

Last week the Daily Mail upped the ante and went even further to upset our Jewish cousins by  publishing an article with the scary headline: “PLOT TO SUBVERT BREXIT EXPOSED”.  This bore a sub-heading that dared to mention the Jewish plotter’s name: “Leaked dossier reveals full details of £6m campaign — backed by foreign billionaire Soros — to undermine the will of the people.”

Whew! Talk about incendiary language! How can nice Jewish philanthropists like Mr Soros, scattering his largesse across the world to help the oppressed masses,  “undermine the will of the people”?

Conservative MP and former Cabinet Minister Owen Paterson was to add to the seething cauldron of alleged antisemitism in Britain by pointing out that Soros was trying to undermine democracy by his meddling in the affairs of a foreign state. “The cynical plan to manipulate the British voter and stop Brexit has now been laid bare,” he mused matter-of-factly. “Leave voters will be disgusted that George Soros thinks he can spend his fortune to determine the direction of our great country. We must denounce this brazen attempt to undermine our democracy.”

Omigod, the antisemitism! Doesn’t it make your blood boil to hear words like “disgusted” and “brazen attempt” bandied around in connection with a nice Jewish philanthropist like Soros, whose only aim in life is to spread sweetness and light  across the globe?

SABOTAGING BREXIT! . . . SUBVERTING DEMOCRACY! . . .
MEDDLING IN THE AFFAIRS OF A FOREIGN COUNTRY!

Brexit. It breaks my heart even to think about it. They gave us a referendum in June 2016.  This was two years ago. They said:

“YOU decide! Do you want to be part of the United States of Europe and be ruled by unelected despots in Brussels who will flood your country with millions of immigrants — thousands of them illegal —  who will steal your jobs, bring your National Health Service to its knees, reproduce like rabbits, live on the dole, groom your underage girls into sex, gang rape your women left, right and centre, and contribute to future race wars, riots, and socio-economic ruin? — Or do you want a country with borders, stability, and traditional moral values?”

No, they didn’t put it in those crude terms. But everyone knew which way the ball was bouncing. This was what the people voted for:  a country that belonged to them and not to others — certainly not to a meddling Hungarian Jew with a God Complex.

Let’s hear what Richard Littlejohn, star columnist of the Daily Mail, has to say about Brexit. He speaks for me. And for tens of millions of other patriotic Brits whose votes are now being torn up and trampled upon by the likes of arch-meddler George Soros and smarmy war criminal Tony Blair.

Two years down the drain. Two years of vacillation, obfuscation, cowardice, sabotage and outright betrayal. And that’s just from our own Government.

The question on the ballot paper was unambiguous, the so-called catastrophic consequences spelled out in plain English in a brochure distributed to every single home in the country by a Government which was desperate to Remain.

Campaigning was exhaustive, lasting six whole months. We knew exactly what voting Leave would mean. No single market, no customs union, no more submitting to the jurisdiction of European courts. We would be retaking control of our borders, our laws, our traditional territorial waters and our national destiny.

More people voted Leave than have ever voted for anything in our history. By now, we should be as good as gone, with only a few minor details to be ironed out. Yet two years on, just as I feared, we’re no nearer the exit. Every day seems to bring yet another blatant attempt to derail the process, to keep us subjugated in perpetuity as prisoners of a sclerotic, anti-democratic European superstate.

The latest comes from a group bankrolled by the billionaire hedge funder George Soros, a Hungarian-born American who made his fortune betting against the pound on Black Wednesday in 1992. Having earned the nickname of the Man Who Broke The Bank Of England, he is now determined to become The Man Who Broke The Will Of The British People.

What right does Soros have to interfere in the internal affairs of a foreign country?

Most people  haven’t heard of the Coudenhove-Kalergi plan. If they had, and knew what was involved, an overwhelming majority of Brits would insist on Brexit — on breaking free from the sinister tentacles of a federal superstate otherwise known derogatively as the “United States of Europe”.

This is a superstate without borders, ruled over by an elite cabal of international Jews and their shabbos goyim Zionist lackeys. A superstate that encourages mass immigration from Third World countries, promotes miscegenation and mixed breeding, foments race wars, and will inevitably lead to White genocide in 50 years’ time.

Given this ominous backdrop, one can well understand why Hungarian Jew George Soros, a leper in his own country, is doing his best to sabotage Brexit. This is because the rejection of the European superstate by the British people in June 2016 is equivalent to a resounding “NO!” to a Jew-controlled European superstate that is part and parcel of a long-term plan to bring about Jewish world domination. No, this is not a kooky anti-Semitic “conspiracy theory”. It is  a closely documented fact. (See this writer’s The Coudenhove-Kalergi Plan: White Genocide by Design.)

Europe is under sentence of death.

The mass rape and murder of the indigenous population of Europe in their own homelands by the unstoppable hordes of the Third World is now perhaps inevitable. We in our ancestral homelands, clinging to what remains of our cherished heritage, need to prepare for a grim future of unparalleled sufferings.

There is no way Europe is going to survive the cataclysms ahead unless Europeans take drastic action, without delay,  to reverse the menacing tide of mass immigration—if necessary by mass deportation of the invaders.  It may one day be necessary, as has recently been suggested in a controversial French novel, to bomb the refugee ships and gun the invaders down on the beaches.

This is a scenario too chilling to contemplate. Heaven forbid it should ever come to pass. But as they say, in desperate times…. Or as the old Latin adage has it, Remedio amaro amaram bilem diluunt. Loosely translated, “Drastic remedies for drastic diseases.”

Whatever the outcome, we need to prepare for violence: violence by the indigenous protestors at the invasion of their homelands, violence by the conquering hordes who have come to settle these lands where they are clearly not welcome by most people, and violence by the Orwellian police state as it does its best  to crush protestors and hand over our ancestral homelands to the New Invaders.

The conquest of Europe (and America) by these alien outsiders simply cannot be accomplished without bloodshed. Anyone who fails to grasp this has no concept of history. Or the idea that history repeats itself. The same malignant forces that helped to unleash the French and Russian Revolutions—cataclysmic events  that swept away the remnants of the ancien regime and brought in new tyrants with uglier faces—are now planning another revolution to eclipse all the revolutions of the past: enforced mass immigration and multiculturalism with their inevitable consequences: White dispossession and mass mongrelization, leading eventually to White genocide.

In 50 years’ time it will be hard to find a white face in any great European city. A white face in a seething multicultural cauldron of race hate and riots would be like a lamb thrown into a tiger’s cage.

Listen to the prophetic words of Enoch Powell. These were uttered in  a memorable speech given in April 1968, just over 50 years ago:

“We must be mad, literally mad, as a nation to be permitting the annual inflow of some 50,000 dependants, who are for the most part the material of the future growth of the immigrant descended population. It is like watching a nation busily engaged in heaping up its own funeral pyre.

As I look ahead, I am filled with foreboding. Like the Roman, I seem to see “the River Tiber foaming with much blood”. That tragic and intractable phenomenon which we watch with horror on the other side of the Atlantic is coming upon us here by our own volition and our own neglect.

Only resolute and urgent action will avert it even now. Whether there will be the public will to demand and obtain that action, I do not know. All I know is that to see, and not to speak, would be the great betrayal.”

Note carefully Powell’s prophetic reference to America: “That tragic and intractable phenomenon which we watch with horror on the other side of the Atlantic…”

We clearly haven’t learned the lesson our American cousins failed to learn either, as they opened the floodgates to mass immigration in 1965 with the disastrous Hart-Celler Act, all this done under intense Jewish pressure. (See Kevin MacDonald’s carefully documented monograph, Jewish Involvement in Shaping American Immigration Policy (1881-1965): A Historical Review.

George Soros is not only determined, it seems, to destroy democracy in Britain by sabotaging Brexit, the will of 17.4 million Brits, but is equally hostile to democracy in the United States.

Mark my words: when this Hungarian “philanthropist” has finished with Britain, he will turn his attention to America and smother it with love, like a mad mother hugging her baby to death. There will be wailing and gnashing of teeth from the other side of the Atlantic, any time soon.