Editor’s Note: This short and concise article, is an excellent summary of why General Patton was murdered. It was written by Eustace Mullins, who was one of the first “conspiracy theorists”, and has written many books, and not just on World War II. The plot to murder Patton was most likely carried out by Eisenhower’s orders. The reason? Patton figured out the false narrative and realized the Germans had done nothing wrong. He also realized that America, as in WWI, was being used again by the Jews to dismantle Germany, since they did not willingly accept communism “like they should have” after WWI.

In December of 1984, it will be forty years since one of America’s greatest heroes, General George S. Patton, was executed by his Communist foes. General Patton was struck down the day before he was scheduled to make a triumphant return to the United States. He had just been removed from his command of the Third Army, which was in charge of governing the American sector of Germany. Because he not only opposed the dismemberment of Germany, but also because he favored military action against the Communists. As the most popular hero of the Second World War, Patton would have been unbeatable in a Presidential race. This was the reason his skulking enemies ordered his execution before he could leave Germany. 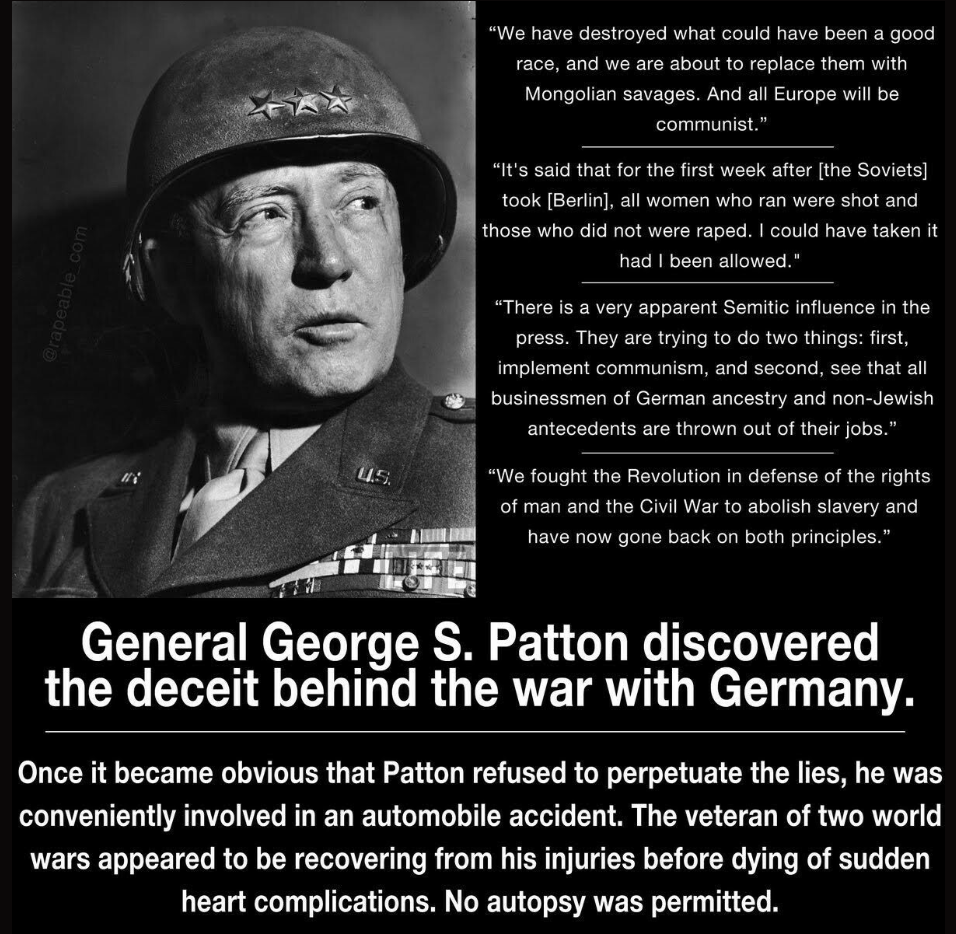 The Patton Papers, 1940-45 recently published by Houghton Mifflin Company in Boston, gives ample reasons for the murder of General Patton. A few months before he was killed, his driver for five years, Master Sergeant John L. Mims, was replaced. Patton was asked by Major General Gay to accompany him on an excursion for a few hours the day before he was to return to America. At 11:45 A.M. in clear weather and on a straight stretch of road, the driver of a GMC military truck turned his vehicle directly into the side of the 1938 Cadillac 75 Special limousine in which Patton was the only person injured. He suffered some internal injuries but did not seem to be seriously hurt. On Dec. 21, 1945, it was announced that he had died of an “embolism”, that is a bubble of the blood which is fatal when it reaches a vital organ. It can be introduced into the bloodstream with a syringe by anyone with brief medical training. 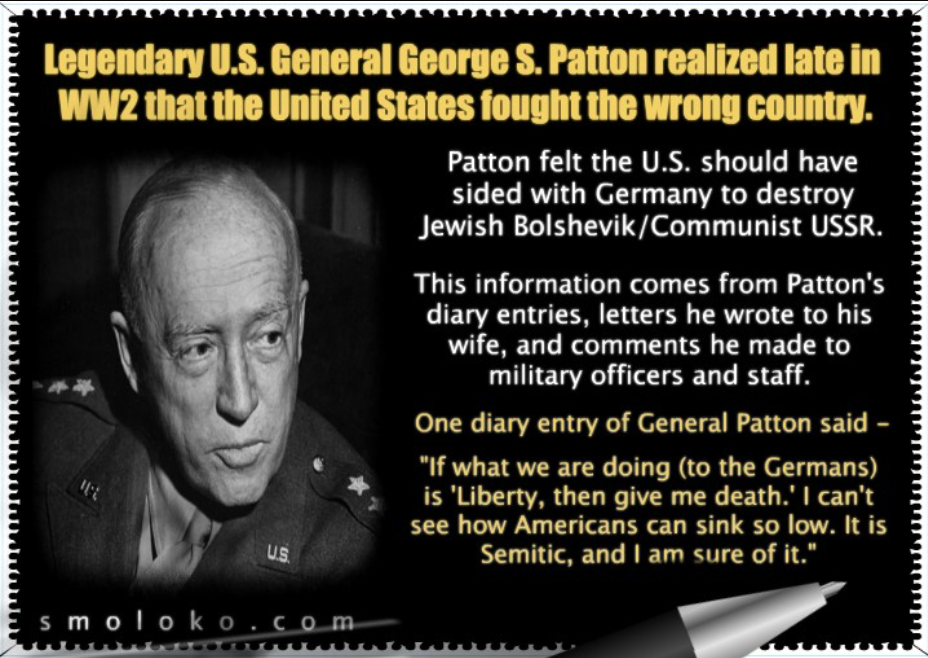 Patton was a vigorous sixty years old with enormous reserves of energy, who seldom needed more than a couple of hours sleep a night. Not only did the U.S. Army make no investigation into the “accident” which had put him into the hospital, but no questions were raised about his “embolism”. On previous occasions when attempts were made to kill him, investigations were made, despite the fact that he was one of the most popular and most powerful figures in America’s history. He recorded in his diary that on April 20, 1945, while observing the front in his personal plane, which was clearly marked, an RAF Spitfire made three passes at his plane, which attempting to shoot it down, then went out of control and crashed. The story was later put out that a Polish flyer had been piloting the Spitfire. Patton was not injured.

Patton’s military exploits were such that he was the only American general whom the Germans feared. They transferred entire divisions as soon as rumors were spread that he was on a given front. The Germans’ contempt for Patton’s fellow generals was shared by himself, as he proves on many pages of his diary. During much of World War II, Patton survived repeated efforts of his fellow generals, as well as the British leaders, to get rid of him. In 1943, when he had turned the tide in Africa with his brilliant victories at Gafsa and Gela, Patton was removed from command after Drew Pearson printed a story that Patton had slapped a malingerer at a field hospital and called him a “yellow-bellied Jew.” Eisenhower (left) used this incident as an excuse to refuse Patton command of American ground troops in England, giving the command instead to Omar Bradley, whom Patton exposed as a cowardly dullard. We will never know how many casualties Bradleys’ cowardice and incompetence cost us, but it must have been many thousands.

Patton wrote in his Diary Jan. 18, 1944, “Bradley is a man of great mediocrity. At Benning in command he failed to get discipline. At Gafsa when it looked as though the Germans might turn our right flank, he suggested we withdraw corps headquarters to Feriana. I refused to move.”

Patton cited numerous other examples of Bradley’s cowardice. As for Eisenhower, his references to him are always contemptuous. Patton refers to Ike as “Divine Destiny” but more customarily as “fool”. On March 1, 1944 Patton noted in his Diary, “Ike and I dined alone and had a very pleasant time. He is drinking too much.

Patton was extremely disgusted with Eisenhower’s infatuation with his “chauffeur”, Kay Summersby,{Above) and he persuaded Ike not to divorce Mamie in order to marry her. Kay Summersby was a British Intelligence Officer who had been ordered to prostitute herself to Ike so that he would send American troops into the line instead of the British. England had experienced such a terrible bloodletting at the hands of the German armies in World War I that Churchill and the other British leaders determined to sacrifice Americans wherever possible on the Western front. Although Kay Summersby secretly despised Eisenhower, she was a loyal British subject, and she successfully carried off the affair. It is estimated that she cost the United States 100,000 casualties which otherwise would have been borne by the British.

Patton had noted in his Diary, July 5, 1943 before his successful African campaign, “At no time did Ike wish us luck and say he was back of us—fool.”

On July 12, 1944, Patton wrote in his Diary, “Neither Ike nor Bradley has the stuff. Ike is bound hand and foot by the British and doesn’t know it. Poor fool.”

As a result of Patton’s bold advances in France, Field Marshall Montgomery persuaded Eisenhower to issue one of the most amazing military orders in history. All of the Allied Armies must advance exactly abreast, so that no one (meaning Patton) would receive “undue credit.” Throughout the war, Patton achieved his amazing victories by being in the field, whereas the other generals remained far behind the front in their dugout “headquarters” or in luxurious villas far from the sound of gunfire.

During a press conference on May 8, 1945, Patton was asked, “Would you explain why we (the Americans) didn’t go into Prague.” “I can tell you, exactly,” Patton replied. “We were ordered not to.” Patton wrote to his wife on July 21, 1945. “I could have taken it (referring to Berlin) had I been allowed.” 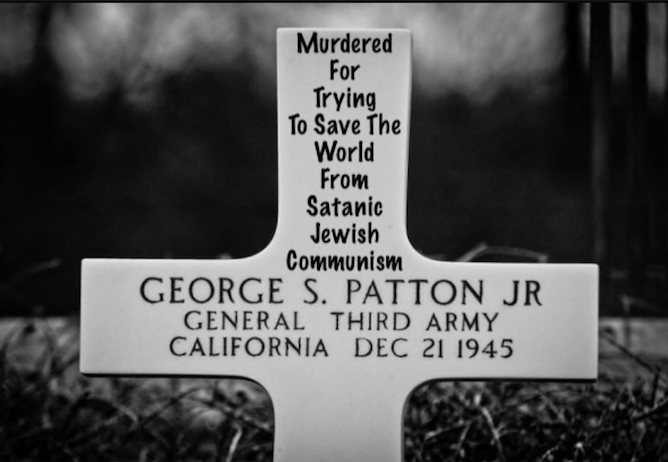 Eisenhower’s refusal to allow Patton to take Prague and Berlin, holding him back while the Russians occupied these critical capitals, remains one of the greatest performances of treason since Benedict Arnold, like Eisenhower, sold out to the British.

Patton apparently was writing his own death warrant when he entered his frequently voiced opinion in his Diary on May 18, 1945, concerning the advisability of fighting Russians: “In my opinion the American Army as it now exists could beat the Russians with the greatest ease, because while the Russians have good infantry, they are lacking in artillery, air, tanks, and in the knowledge of the use of these combined arms; whereas we excel in all three of these. If it should be necessary to fight the Russians, the sooner we do it the better.”

The danger which Patton presented to his enemies was not merely that he was a great American patriot; he also was impervious to any sort of undue influence. He had married Beatrice Ayer, one of the wealthiest women in America. This made him financially invulnerable, and he was happily married, which made it impossible for him to succumb to the blandishments of foreign agents such as Kay Summersby. He opposed Jews and Communists, not only because they were enemies of America, but, because they were a lower order of human beings. He refers to the fact that the Jew is an Asiatic, devoid of feeling for human life. Shortly before he was killed he wrote in his Diary Oct. 1, 1945, “THE JEWISH TYPE OF DISPLACED PERSON IS, IN THE MAJORITY OF CASES, A SUBHUMAN SPECIES WITHOUT ANY OF THE CULTURAL OR SOCIAL REFINEMENTS OF OUR TIME.”

Patton was removed from command in Germany because he actively opposed the swarm of locusts, such as the recently recruited Soviet agent Henry Kissinger, who fought Patton to win control of the Military Government in Germany.

In his Diary, August 29, 1945, Patton wrote, “Today we received a letter in which we were told to give the Jews special accommodations. If for Jews, why not Catholics, Mormons, etc.”

On August 31, 1945, Patton wrote to his wife. “THE STUFF IN THE PAPERS ABOUT FRATERNIZATION IS ALL WET. ALL THAT SORT OF WRITING IS DONE BY JEWS TO GET REVENGE. ACTUALLY, THE GERMANS ARE THE ONLY DECENT PEOPLE LEFT IN EUROPE“. 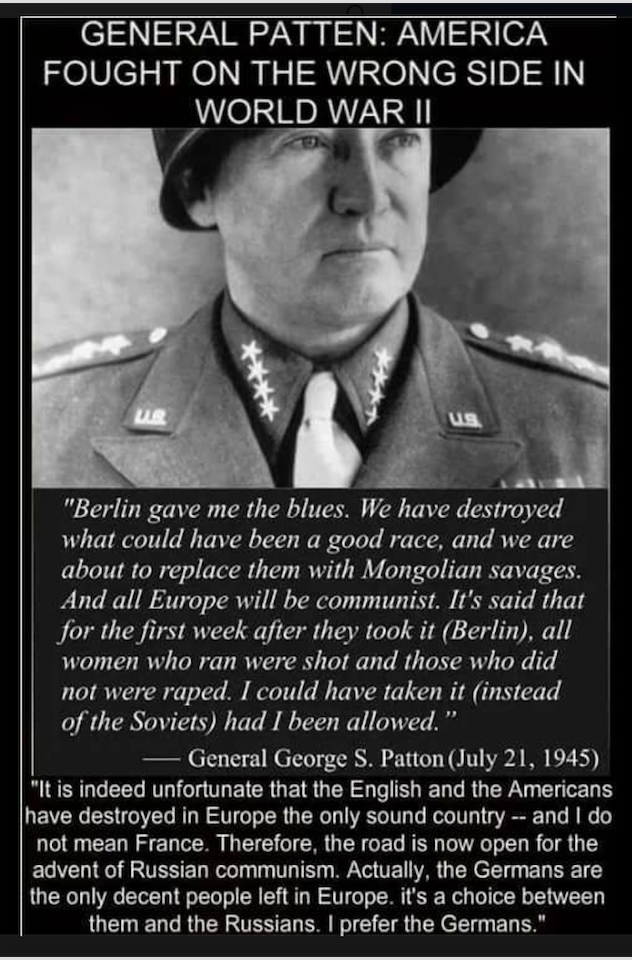 Patton noted in his Diary on August 31, 1946, “I also wrote a letter to the Secretary of War, Mr. Stimson on the questions of pro-Jewish influence in the Military Government of Germany.”

As a result of Patton’s opposition to the Kissingers, who believed they had won the war and should rule Europe, a furious press campaign again was launched against him. A pro-Patton observer named Mason wrote, “The Daniell-Bevin-Morgan plot to destroy Patton was successful because Bernstein of PM was the most powerful force in Germany in 1945 because he had the support of Harry Dexter White, and Henry Morgenthau, Laughlin Curry, David K. Nile and Alger Hiss.”

On Sept. 29, 1945, Patton wrote to his wife, “The noise against me is only the means by which the Jews and Communists are attempting and with good success to implement a further dismemberment of Germany.”

Removed from command by the Jewish plot against him, General George S. Patton would have to return to the United States to work for the good of his country. It was to prevent this that a truck smashed in the side of his car in one of the strangest and most-ignored event in America’s military history. Those who fight for America are always in danger, always thwarted by the plotting and the treachery of the subhumans whom Patton recognized and battled to the end of his life. His story is one which enlightens and inspires us all, and this is why we must, after forty years, remind the American people of the cowards who murdered him. 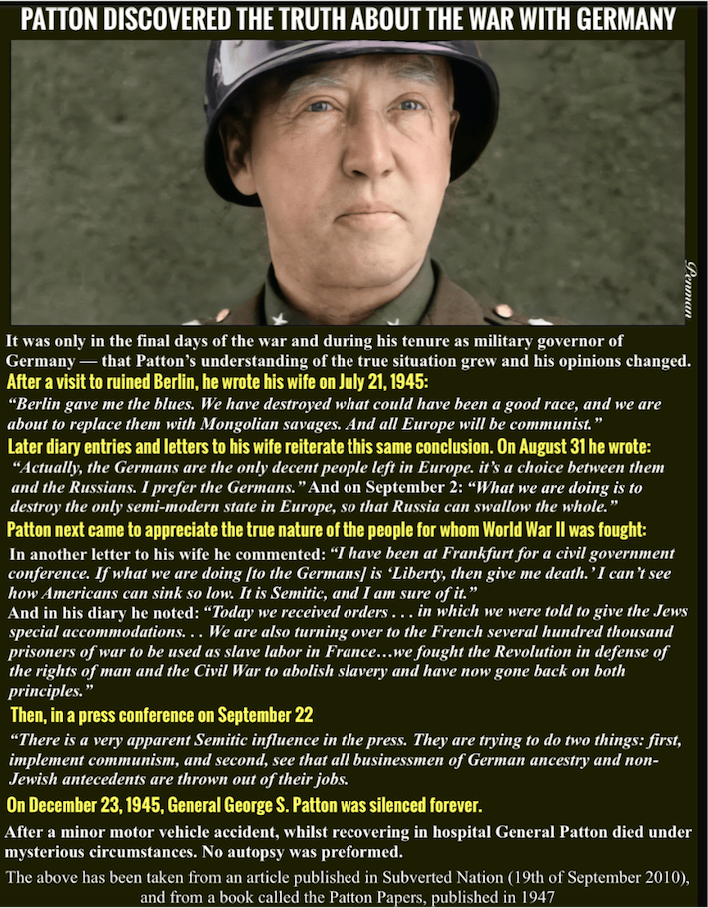