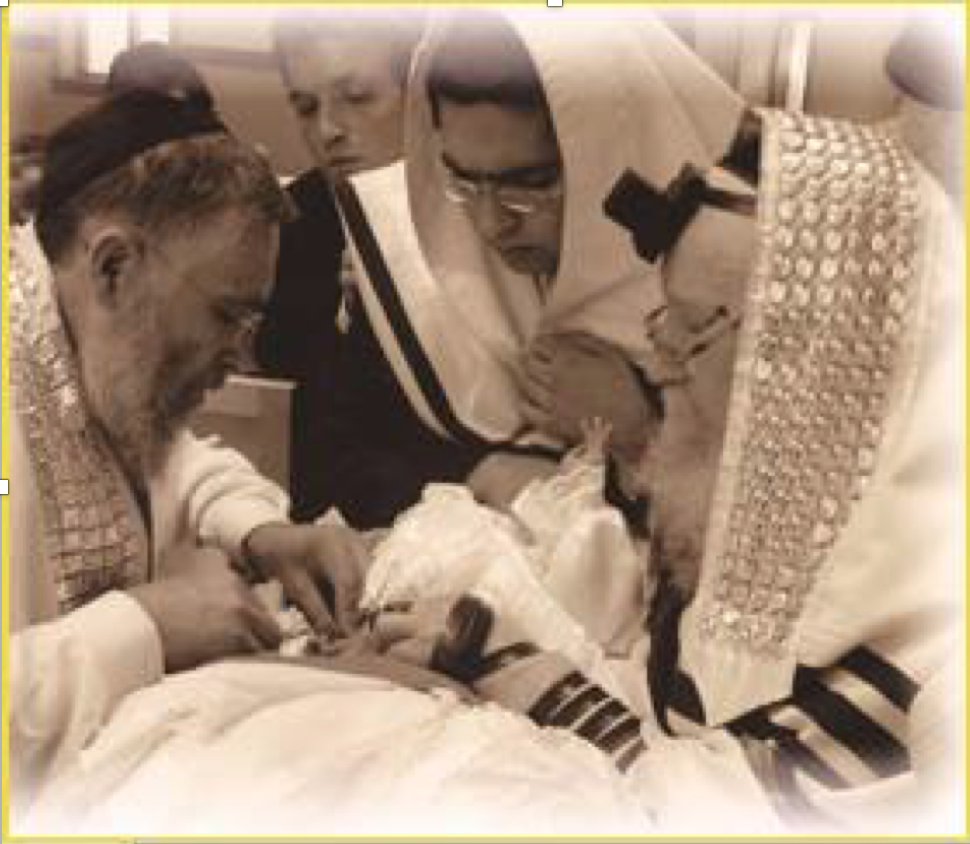 Please notice the psychopath in this photo with a white towel on his head. He appears to be holding the baby’s head forcefully and trying to muffle the screams of the infant while he is being sexually tortured and genitally mutilated. This is being done to create a covenant with the jewish satanic god, Lucifer. Notice also the sadistic black straps, called tefillin, wrapped around the arms of yet another jewish psychopath who simultaneously wears the black box of Saturn worship on his forehead.

Judaism is a satanic cult. It needs to be named for exactly what it is and the creatures responsible for the sexual torture of infants need to be imprisoned. Members of this wicked satanic cult have taken over the medical system and mainstreamed the ritual sexual abuse and genital mutilation of infant boys and this needs to end now.

WAKE UP AMERICA!!! YOU HAVE BEEN COMPLETELY BRAINWASHED BY ORGANIZED JEWRY.

Below is a fascinating interview with a jewish intellectual who ponders with great sincerity the psychopathy of jewish people and the impact this psychopathy has had worldwide. The videos are in French with English subtitles. Here’s an excerpt:

“…And to be able to win in one operation 500 billion francs, and crash the bank of England with one phone call, you have to be a jew… I found the origin of this jewish speculation — this speculative-parasitic mind, jewish of course, which for 5,000 years… has weighed down on the entire planet; it’s the 8th day circumcision which we’ll talk about…

On what do we blame, or can we blame, objectively, the jewish mindset?

Well, you know in the commentary of the Torah, it is written that circumcision is something that goes beyond human understanding — that you shouldn’t try to understand. I read it myself in the commentary of the Torah, so I say this knowingly. Well, that’s not the case anymore. Now we know. And we know — well I know and some people know — Albert Camus knew… and Dr. Gautier who figured it out of course knew better than me, some philosophers like Gustave Thibon etc. know. But the masses ignore it, and the jews are totally unaware — their ordeal – because it’s an ordeal they live through – You know, to torment and to kill others, it’s also hell for them, it’s a disease. You know Neitzsche said ‘it was the sick who invented malice.’ Consequently these are people you need to cure, and to cure the jews it’s very simple: radical suppression of the 8th day circumcision. And we’re going to enter the heart of the issue… Well there is, for the jews, an operation you get done on the 8th day after birth, it’s called circumcision. Now on the 8th day after birth, begins – as Dr. Jean Gautier has shown — the first puberty. This puberty lasts 21 days. It’s going to last 21 days starting on the 8th day. And it’s on the 8th day that circumcision is practiced. As a result, the first puberty, which is a major event, is going to be disturbed… [T]his operation affects the jewish psyche and endocrine system… What happens is when you perform this operation, you set free some hormones contained in the internal genital organ, which is THE human gland. The gland that basically runs everything deliberately. Deliberately not automatically… so it’s the organ of free will. It will consequently become underdeveloped starting that day… It will be underdeveloped and at the same time it will liberate other organs, which will run without the breaks on. Because the role of the internal genital gland is precisely to orchestrate a balance in the whole hormonal system. It won’t be able to do it. Thus the pituitary and the thyroid, even the adrenal glands to a lesser extent, will become unhinged. They will therefore be out of control – 7, 8, or 10 times more active than in most humans. And what’s going to happen? The internal genital gland, which is underdeveloped in the mentally ill, will be underdeveloped in the jews. Which means they’ll only have enough interstitial capacity to direct their speculations which will be dictated by their pituitary and their thyroid. Hence a sort of real illness: they can’t stop… [W]hat’s switched off is the potential to control their speculation… And you come to these monstrosities that are financial capitalism, marxism and freudianism. So then… the hormones will fixate either upon the reproductive genital gland, which will make the jews sex fiends, womanizers…

So the jews would have a satanic mission… with the obligation to not understand the tragedy of circumcision…through denial if need be. To reach the end of their satanic path… They are hence compelled to pursue this horrible analytical path until the end, and to impose it on humanity as a whole, and unfortunately they’re buying into it without any resistance. That’s how you can understand the jewish question on a metaphysical level — basically, they are innocents, miserable, who suffer the consequences of an unfortunate operation, giving them an absolutely fixed mentality which makes them great financeers, I mean the ones who run the world, they are also jewish… the Jews who run the world, they have the mindset because of the circumcision, and they cannot escape it…. So this circumcision is, therefore the key…

I can’t find a word derogatory enough to fit the holocaust story. It’s really the most fantastic deception. And when I say deception, filthy, revolting deception – that history ever presented to us. There’s another one. It’s the famed flight from Egypt. We’ve been made to believe they fled Egypt and the Pharaoh didn’t want to let them leave. Actually it’s the exact opposite… Moses, who was convicted with murder but hadn’t been executed because he was ranked a prince and he was made to come back to deal with these people and take them elsewhere. That was the first lie. So it started with the first lie, you see, and it ended with the holocaust. So, enormous lie. Elementary graduation level lie. Yes. It’s very simple. 6 million. Start with 6 million. 6 million is country like Switzerland. You see the size of Switzerland right? … Imagine the dimensions of Auschwitz concentration camp since it happened in Auschwitz supposedly. It doesn’t hold water… There’s no room for those 6 million. That’s the first thing. Then if 6 million had to be exterminated, there would be ashes. Thousands of tons of them. Because millions of people — that’s quite an amount of ashes… Now these ashes, if they’d been gassed, there would automatically be traces of hydrogen cyanide. Ashes were never found. Ashes were never analyzed. Hydrogen cyanide was never found… These gas chambers were supposedly adjoined to the crematoriums. Zyklon-b is a hyperflammable and explosive gas. Imagine for a second a gas chamber next to a crematorium. It would make some pretty fireworks.
— Roger Dommergue Polacco de Menasce, Entretien avec le professeur