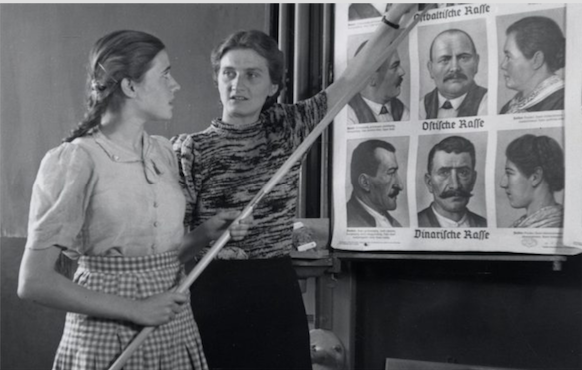 Background: The National Socialist Party’s Central Propaganda Office, the Reichspropagandaleitung, published a monthly bulletin for speakers through until 1944. It was designed to be kept in notebooks, divided by subject area. This particular material was issued in installments to speakers from August through December 1935, beginning just before the proclamation of the Nuremberg Laws. I’ve translated most of this because it is the material on which thousands of National Socialist speeches were based on, less visible than material published in the press, but rightfully spread by speakers to every corner of the country. It also is a good summary of what NS Germany were saying publicly about the jews in late 1935. It also shows how jews are being treated with remarkable gentleness and patience.

Even if people realize that the essential characteristic that separates the jew from the Aryan host people that surrounds him is the race to which he belongs, which National Socialist educational work has made the common thinking of the German people, one still sometimes encounters the following view:

“…. Granted that the jew belongs to a foreign race, but he can be as good a German and as good a citizen as us. After all, we have many jewish families that have lived in Germany for generations, and are no longer any different from us. Over the decades, their thinking and feelings have become German. And many jewish men have married German women, and many German men have married jewish wives. The children of these marriages, surely, are German. Perhaps those jews who have immigrated to Germany think differently than those jews who were born in Germany, but those jews born in Germany and who grew up in a German environment are certainly German…”

What do we say to that? An answer is not hard, since we do not have to give it, but instead can use statements by jewish writers, who certainly cannot be thought to be hostile to the jews.

In January 1930, the Jüdische Volksblatt in Vienna wrote:

“Because of our race, because of our oriental ancestry, because of the vast ethnographic, intellectual, and cultural divide that separates us from the Aryan tribes, and most of all Germandom, we jews are not in a position to make the slightest claim on German customs and German traditions. In a word, we have absolutely nothing to do with the Germans.”

The jew Sir Alfred Mond, who played, and still plays, an important role in English public life, had to defend himself before an English court in 1920 because of his “German” descent. The judge, who knew nothing at all about racial thinking, believed that since Mond’s family had a German name, and had lived for years in Germany, he had to be a “German.” Mond had this to say to the judge (under oath, it should be noted):

To the claim that Mond was naturalized in England and therefore must think himself an Englishman, he replied that he did not think of himself as an Englishman, but rather as a British subject. When it was said that he must belong to a nation, he agreed, but said he belonged to the jewish nation.

In 1918 the jew Heinrich Samuel, “born in Germany of German parents,” replied to a question in a London police court as to his nationality in this way:

“I am a jew, with not a drop of German blood in my veins. My sympathies are entirely on the English side; as a jew, I have no nationality.”

“The jews know no political and geographical borders.”

The jew Dr. Jakob Klatzkin had the following to say at a student meeting in Basel, according to the newspaper Wahrheit of 1 June 1918:

“We are not Germans, French, etc., and jews on top of that. Our jewish nature is not built on top of our German nature, etc., nor is it a foundation of being German. They are mutually exclusive. We are jews without a hyphen, jews without qualification, jews without reservation. We are simply foreign. We must always repeat that we are a foreign people in your midst, and want to remain so. There is an unbridgeable chasm between you and us; your god is foreign to us, as are your myths and legends, your national inheritance.

“Baptism and intermarriage make no difference at all. To the hundredth generation we remain jews, just as we were 3,000 years ago. We do not lose the scent of our race, even through ten-fold intermarriage. In any relationship with any woman, our race dominates. young jews will result from it.”

What the jew thinks of his “German” nationality is absolutely clear from the words of the “German” jew Heinrich Heine, alias Chaim Bückeberg, who wrote:

“Everything that is German repels me, and you are unfortunately a German. Everything German affects me like an emetic.”

The marxists in Germany wanted to erect a memorial to this filthy pig, even though he had insulted it so gravely and poured filth over it in his “poems” and other literary productions. Foreigners responded to this proposal with the following cutting remark:

“If the Germans really erect a monument to Heine, we French can get rid of an army corps the same day” (Figaro).

These examples should be enough to show what the jews themselves think about “naturalization” and their “incorporation” of members of their race into that of their host people. There has never been a “German” jew, and there never will be one. As a member of a race foreign to us, the jew is always a foreigner who lives and dwells in Germany, but who will never become a German, not even in the tenth generation. A piece of paper called a naturalization certificate, like those issued by the November state, can never make the jew a “German citizen.”

From this, it follows that the greatest deception, the greatest falsification that jewry has committed is to invent the term “German citizens of the jewish faith”. The German quietly accepted it, but he would certainly have laughed if he had ever read “German citizen of the Evangelical faith.” He never asked why that was false, but the other not.

The German Michel accepted this nonsense, which means he never recognized it as such, so it remained for the jew to joke about his invention. The jew Walter Rathenau said in 1897:

“A peculiar sight! In the middle of German life, a separate foreign tribe of people, standing out in their bright and shining dress and hot-blooded behavior. An Asiatic horde on the sands of the Mark!”

And a devastating judgment from the jew Einstein in 1939:

“I have to laugh when I hear ‘German citizen of the jewish faith.’ First, these citizens want nothing to do with my poor Eastern jewish brothers, and second, they are not sons of my (jewish) people, but rather only members of the jewish cultural community. Is that honest? Can a Gentile respect such people? I am not a German citizen. I am a jew, and am happy to belong to the jewish people.”