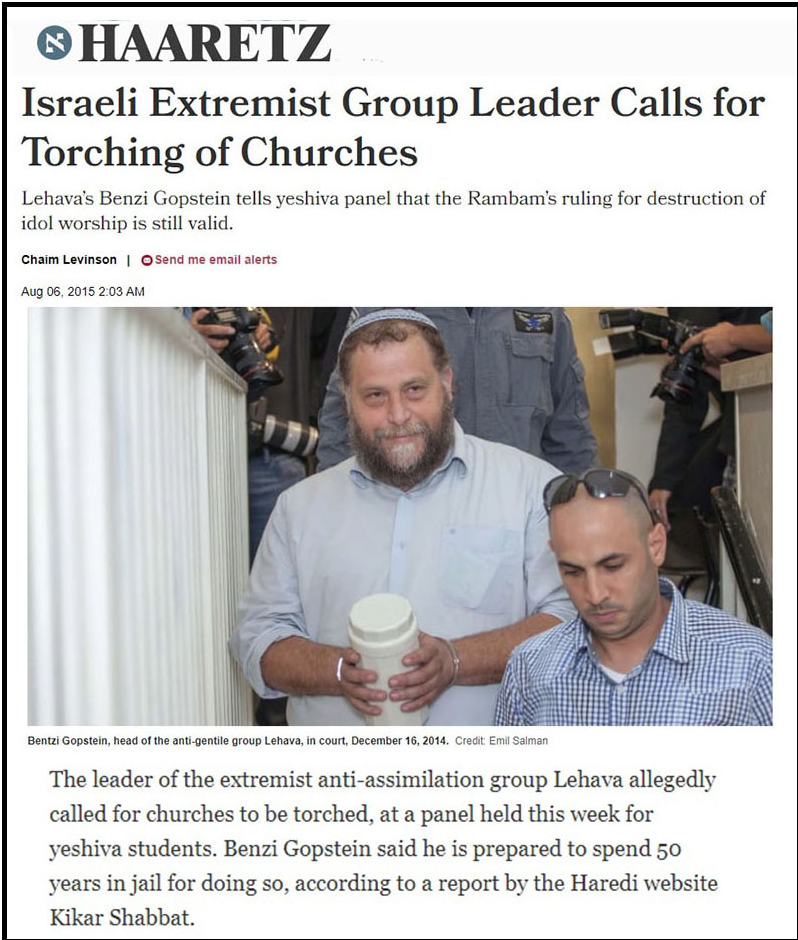 In amazing feats of luciferian reversal, these creatures repeatedly accuse others of what they themselves are guilty of.  See excerpts below.

“Israeli Prime Minister Benjamin Netanyahu has made a formal electoral pact for the upcoming April election with the Otzma Yehudit (literally, “Jewish Power”) party which has as its policy the expulsion of all non-Jews from Israel, and whose leaders have said that “Christians are ‘blood sucking vampires’ who should be expelled from Israel.”

Michael Ben Ari was the first openly-declared follower of Rabbi Meir Kahane to have been elected to the Israel Parliament, and won fame for tearing up a copy of the New Testament and saying that this “despicable book galvanised the murder of millions of Jews during the Inquisition and during auto da fe* instances.”

“Gopstein who is director of the Lehava organization, is perhaps most famous for campaigning against Jews marrying non-Jews, calling for the burning down of all Christian churches in Israel, and for announcing that all non-Jews, and Christians in particular, need to be expelled from Israel because they are “blood sucking vampires.”

No-one would of course presume to dictate to Jews how they should set up their ethnostate, or indeed even want to deny them the right to preserve that state as a Jews-only nation.

However, the Israel-supporting Jewish lobby in all European nations continually demand that Europeans be “multi-cultural” and are at the forefront of promoting racial integration for all non-Jews.

This policy of ethnonationalism for Jews, and enforced multi-racialism for non-Jews, is the single greatest cause of anti-Semitism in the world today—and it is caused by hypocritical Jewish behavior, and nothing else.

* auto-da-fé: The burning of a heretic by the Spanish Inquisition.