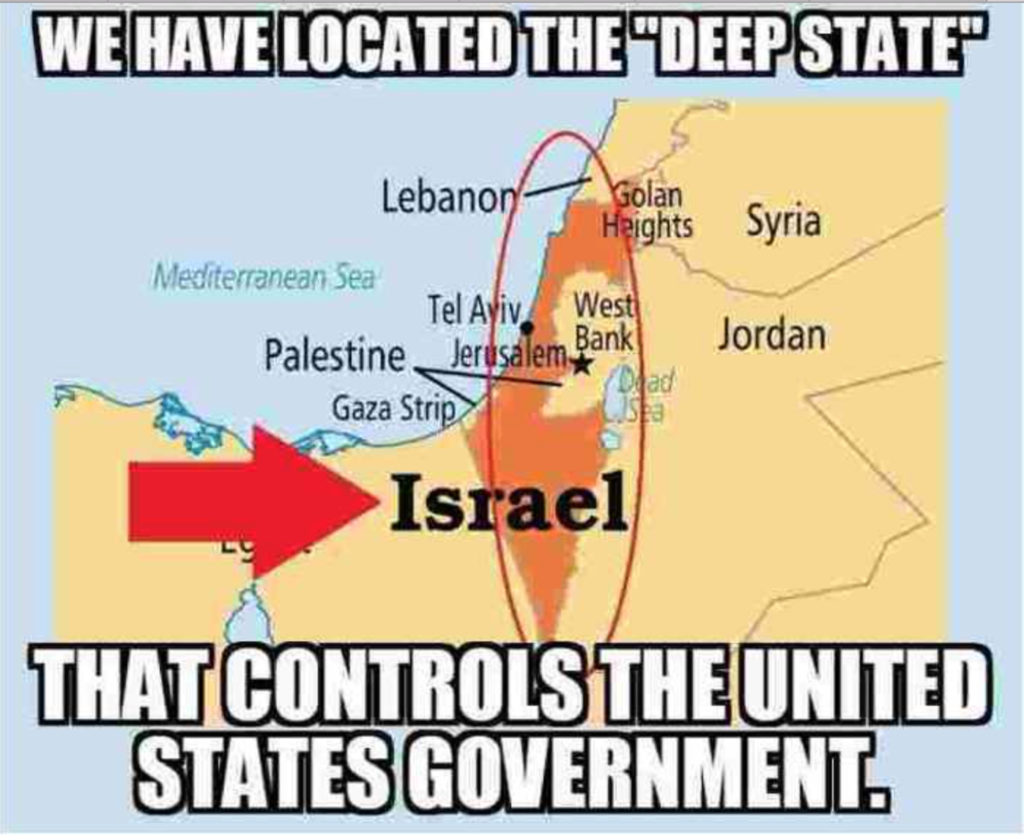 Members of the “right” and “alt-right” love to use terms such as “the establishment,” “Deep State,” “globalists,” etc., in describing freedom’s political enemies. And, yes, I often use those terms too. For the sake of brevity, I will refer to the above as simply “the ruling class.”

Seldom, however, do conservatives identify who actually comprises the ruling class…

And when it comes to accommodating the international bankers (translated: creating and increasing a debt-based economy), both Republicans and Democrats happily play along…

The president doesn’t pick his cabinet and administration officials; the ruling class picks them…

But the 800-pound gorilla in every backroom in Washington, D.C., is the Israeli lobby. For all intents and purposes, Israel and the ruling class are one and the same.

And then there is the problem of Congress itself, which is precisely the institution that has been most corrupted by Israel and Jewish money. Almost thirty years ago, American politician Pat Buchanan described Congress as “Israeli occupied territory.” As a result, he was viciously attacked by the mainstream media and the political leadership of both parties, demonstrating beyond all doubt that he was correct in his observation. Today the Israel Lobby in the United States is far more powerful than it was in 1990, so much so that Israeli Prime Minister Benjamin Netanyahu actually boasts to his voters that he directs U.S. policy.

Everyone in Washington knows very clearly but will never admit that Israel has seriously corrupted the United States government and its elected officials at all levels. But [Congressman Adam] Schiff did not mention Israel, nor did he express concern that Israel’s clearly unsavory involvement with Trump transition team members General Michael Flynn and Jared Kushner was never thoroughly investigated or included in the final Mueller report. One might assume that a deliberate decision was made by some parties in power to avoid embarrassing Israel. Those parties almost certainly included Schiff.

Schiff, who is Jewish, frequently tells audiences about his love for Israel, sometimes complaining that it is treated unfairly. It might be suggested that if anyone in the government is partial to a foreign power it is Schiff, and that foreign power is Israel, not Russia.

Unfortunately, Schiff is far from unique. Perhaps he and a number of other Congressmen should register under the Foreign Agents Registration Act of 1938, as required by law. Congressmen are not exempt when they work to benefit a foreign nation, though they frequently believe themselves to be not subject to the very laws that they pass. In May, a letter was sent to the White House with the signatures of 400 [out of 435] congressmen, purely to express America’s legislature’s solidarity with Israel and to give it a green light to do whatever it wishes vis-à-vis its neighbors. The letter cites some questionable American interests relating to Syria, but it also mentions Israel no less than 13 times.

And let’s not forget that there are over 100 high-ranking members of the U.S. government (that we know about) who are foreign citizens. And guess which country? Right: Israel. The U.S. government is awash with dual U.S./Israeli citizens...

For years, Israel Prime Minister Benjamin Netanyahu (corrupt politician and mass murderer) has bragged privately and publicly that Israel controls the United States. Here is a privately recorded video of Netanyahu bragging about Israel’s influence over the U.S. Notice how he mocks the American people for being so gullible.

Just a few days ago, Netanyahu again boasted of Israel’s control not only of Washington, D.C., but of many U.S. states.

Israeli caretaker prime minister Binyamin Netanyahu, who has been indicted for corruption and is facing an election soon, just boasted that his ministry of strategic affairs has managed to undermine first amendment protections for free speech in the United States by lobbying state legislatures to pass laws forbidding the boycott of Israel…

Confirming Israel’s intimidation of U.S. State governments, Journalist Abby Martin is suing the State of Georgia for requiring her to sign an anti-BDS manifesto before allowing her to speak at a college assembly in that State. Imagine, a State of the United States requiring an American journalist to, in essence, swear loyalty to a foreign country as a condition to speak at an American university.

Just recently, the State of South Dakota became the 28th State to pass an anti-BDS law.

In Texas, Governor Greg Abbott was recently invited to Israel to receive the Friends of Zion Award (the same award was also given to Donald Trump and G.W. Bush). In his acceptance speech Abbott said, “Anybody who is an enemy of Israel is an enemy of Texas.”

I thought the governor’s oath included fidelity to the United States, NOT a foreign country. When did Greg Abbott take an oath to Israel? And what does he have in mind for the citizens of Texas (“enemies”) who engage in their constitutional right to participate in the BDS movement against Israel? Fines? Imprisonment? Torture? Death?

Speaking of Texas, in 2017, the Houston suburban city of Dickinson refused to provide emergency relief assistance due to Hurricane Harvey to townspeople who would not sign an anti-BDS declaration:

How is this not treason? How is what all of these Israel bought-and-paid-for American politicians are doing not treason?…

If Benjamin Netanyahu knows he controls America, why don’t evangelical Christians know? It’s because they are bewitched and deceived by the false doctrines of Christian Zionism.

It’s time to put Americans back in charge of America.