Pedophilia and Bestiality are seeping into popular culture. Could the Talmud be the source?

Elizabeth Dilling (1894-1966) did more than anyone to expose the true nature of one of Judaism’s holiest books.

St. Paul, who had been a Pharisee, often bores Christians who do not know what he was arguing about, in his discourses aranguing Pharisees. But one familiar with the Talmud can appreciate his diatribe against the “uncleanness” of those, “Who changed the truth of God into a lie” and: “Professing themselves to be wise, they became fools,” until “God gave them over to a reprobate mind … . Being filled with all unrighteousness, fornication, wickedness … .” (Romans 1:22, 25, 28).

Of the “sacred” Talmudic teachings of the “Sages,” preserved since 500 A.D. and taught more widely today than ever before in Talmud-Torah schools in the U.S.A., perhaps nothing better illustrates “fools” with “reprobate minds” than the teaching in the Talmud book of Yebamoth.

Although Moses commanded that if a woman have intercourse with a beast, both should be killed (Leviticus 20:16), and that a priest must not marry a harlot or woman who is profane (Lev. 21:7), the Talmud teaches that “unnatural intercourse does not cause a woman to be forbidden tomarry a High Priest,” since then “you will find no woman eligible … .” (Folios 59a-59b)

This alone gives a fair idea of the systematic deformation of Scripture by the Pharisees and the truthfulness of Christ’s denunciations about their making God’s commandments of none effect by their Tradition. (Matthew 15:6)

Baby boys may always be used as subjects for sodomy by grown men, according to the Talmud. (The Pharisaic subterfuge here is that until a child reaches sexual maturity, capable of sexual intercourse, he or she does not rank as a person, hence Biblical laws against sodomy (pederasty) do not apply. Throughout the Talmud “nine years and one day” is the fictitious age of male maturity.

Likewise, under “nine years and one day,” the “first stage of intercourse” of a boy with the mother, or any grown woman, is harmless, Talmudically. Shammai, to seem more “strict,” lowers the age to eight years in some cases. (See Exhibit 82 from Sanhedrin 69b of the Talmud)

A long harangue about the amount of the Kethubah (payment if divorced) a woman gets if her virginity was removed by a young boy, fills Kethuboth I lb of the Talmud. And here, the foul mother may be reckoned “pure,” depending on the age of the child. Such degrading use of children was typical of paganism throughout the ancient world.

“When a grown up man has intercourse with a little girl it is nothing, for when the girl is less than this – that is, less than three years old — it is as if one puts the finger into the eye — tears come to the eye again and again, so does virginity come back to the little girl under three years.” (See Exhibit 136, Kethuboth 11b of the Talmud)

This is the standard doctrine of the whole Talmud on baby girls. Sodomy and intercourse with babies is the prerogative of the adult Talmudic man, in contrast to Christ’s beautiful teachings concerning little children.

The following is also typical concerning the fictitious age of sexual maturity of baby girls set by the Pharisee “sages:” “A maiden aged three years and one day may be acquired in marriage by coition …” See Exhibit 55 (Sanhedrin 55b), Exhibit 81 (Sanhedrin 69a-69b), Exhibit 156 (Yebamoth 57b), and Exhibit 159 (Yebamoth 60b); also Niddah 44b…

Adultery is permitted with the wife of a minor, and wife of a non-Jew. (See Exhibit 53) The pretense is that a minor not being a “man” yet, and the non-Jew having non-human status, Talmudically, the Biblical law does not apply.

Thus, once again do the Pharisees make the commandments of God of “none effect” as Christ said. (Matthew 15:6, Mark 7:13)

Moses ordered the priests that: “They shall not take a wife that is a whore, or profane … for he is holy unto his God.” (Leviticus 21:7) The laws against incest are most vehement: “The nakedness of thy mother, shalt thou not uncover: she is thy mother … (Leviticus 18:7) And in the Talmud the Pharisee “sages” reverse these Biblical injunctions:

“If a woman sported lewdly with her young son, a minor and he committed the first stage of cohabitation with her — Beth Shammai say, he thereby renders her unfit to the Priesthood.” Here a footnote explains that she could not marry a priest, if this made her profane and the above Leviticus 21:7 is cited precisely. (See Exhibit 82)

We then learn that the dispute concerns only the age of the son, not the lewdness of the foul mother: “All agree that the connection of a boy aged nine years and one day is a real connection whilst that of one less than eight years is not [Footnote: “So that if he was nine years and a day or more, Beth Hillel agree that she is invalidated from the priesthood, whilst if he was less than eight, Beth Shamnmai agree that she is not.”] …

PERMISSIBLE ADULTERY AND INTERCOURSE WITH THE DEAD

“None of you shall approach to any that is near of kin to him, to uncover their nakedness: I am the Lord,” says the Book (Lev. 18:6). Scripture references are also cited which denounce a married woman who lies “carnally” with a man not her husband. But say the sages: “That in connection with a married woman excludes intercourse with a relaxed membrum since no fertilization can possibly result. This is a satisfactory interpretation in accordance with the view of him who maintains that if one cohabited with forbidden relatives with relaxed membrum he is exonerated.”

And other Talmud sources are cited. “The exclusion is rather that of intercourse with a dead woman [Footnote 15] even though she died as a married woman.” Thus one is “exonerated” for, or permitted, intercourse with dead relatives or with relatives, married or single, “with a relaxed membrum,” because “no fertilization can possibly result.” (Talmud, Yebamoth 55b, See Exhibit 163)

Intercourse with dead bodies was an old pagan practice. The above is echoed with some variation in “the chief repository of the criminal law of the Talmud,” the book of Sanhedrin. (See Exhibit 89)

There the act of sodomy with one suffering with an incurable disease, hence regarded as already dead, or a “terefah,” is held to be merely “as one who abuses a dead person, and hence exempt.” The explanation, which continues on the next page (not reproduced) is: “Punishment is generally imposed because of the forbidden pleasure derived – [footnote] Whereas there is no sexual gratification in abusing the dead.”

How apt it was when Christ called the Talmudic Pharisees “whited sepulchers … full of all uncleanness.” (Matt. 23) Yet some of His followers call these abominators of every decency “God’s Chosen People” and “People of the Book”! 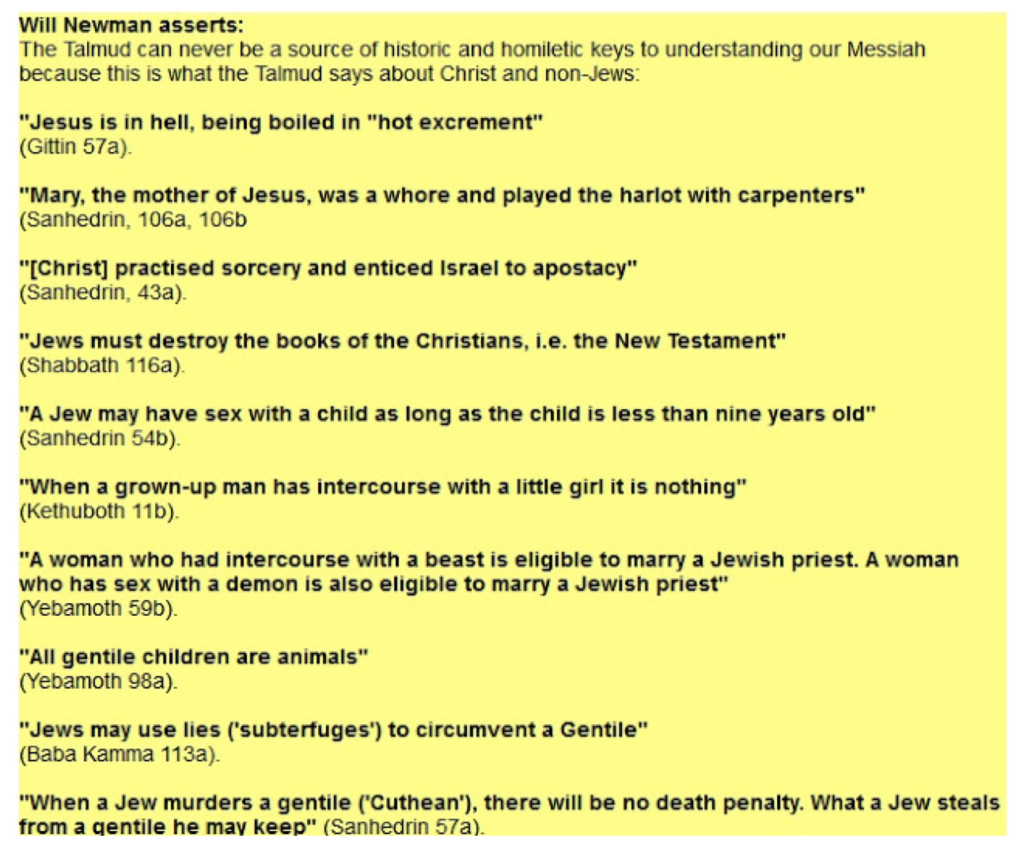