Background: This is a translation of a National Socialist book published late in the war. The author is Robert Ley, head of the German Labor Front.

Jewry, flowing from biological laws, is best expressed in its religion and its conception of god. God represents the highest ideal for peoples and for humanity, so how people conceive of god reveals how they think, their spiritual nature.

Jahwe, the jewish god, is a god of revenge, of cursing, of destruction, one who rains sulfur and brimstone down on humanity, who thunders at them, whose lightning sets fields and meadows ablaze. Jahwe is the grim jewish god who is there only to give jews profits, much gold and money, and lordship over Gentiles.

There is nothing cruder than the jewish religious books: the talmud, the chulchan-aruch, the books of moses and the prophets.

Since he does not even trust his god, the jew sets the “rabbi” above jahwe and declares the jewish god jehovah must study the laws written down by the rabbis in the torah in order to rule the world.

The whole is a collection of ghost hunting and mysticism, blind cursing and the crassest egotism, an unimaginable superiority complex, sick perversity, the overturning of all natural laws, lust for murder, terror, and horror. 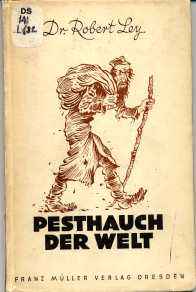 But let us listen to the jew himself. We see how dangerous the jew thinks his doctrines are, and how eager he is to see that they remain unknown to Gentiles.

“It is forbidden for a Gentile to discover the secrets of our doctrines; should a Gentile discover them, it is as if he laid waste to the entire world and denied the holy name (Jahwe).”

Capitalism was born from fatalism. Calvin, one of the most important jewish hirelings, says:

“He who is poor must remain poor, and he who is rich must make more money. It is a sin to teach otherwise.”

There is no end to the jew’s superiority complex. It can only be seen as insane.

Let us listen to these crazy words:

“Each jew must tell himself that the world was created for me” (Sanhedrin 37a). “The land of Israel was created first, then the rest of the world…

“The land of israel was watered by the rains, the rest of the world with what was left” (Taanit 109).

“For each who saves the life of a jewish soul, it is as if he had saved the entire world” (Baba batra 11a, Sochedrin 37a).

“Everywhere the jews come, they will become the lords of their masters” (Sanhedrin 104a).

Reading that, who does not think of Roosevelt, Churchill, and Stalin.

Who should be surprised at such arrogance when one recalls that even Gentiles are always talking about the “Chosen People.” And it is true: they are chosen for lies, vulgarity, fraud, murder, and sloth.

Let us listen once more to the jewish law books:

“If a jew wishes to annul all his oaths of the previous year, he must say at the beginning of the new year: ‘All the oaths that I swore are invalid’” (Nedarim 23b).

“For the sake of peace, one may change his words a bit” (Jebamot 65b).

“May the righteous (the jews) be cunning? Yes! With the pure (the jews) you are pure, with others (Gentiles) the opposite.”

“The marriage of Gentiles is the same as sleeping with animals” (Sanhedrin 74b Tosahot).

These are a few choice passages of jewish lust and vulgarity.

One could continue such filthy citations indefinitely, each one worse than the one before, a mixture of perversity, a sick superiority complex, and the basest sentiments.

Let us continue with other amoral characteristics of the jew, as revealed in his law books:

“Only the jews are important in the world. They are the wheat, the Gentiles the chaff” (Isaak Abrabanul, Commentary on Isaiah, Jeremiah, Ezekiel and the 12 minor prophets….).

This insolence reaches its epitome in the following citation. One can hardly believe it:

This is arrogance so impudent, so outrageous, that it is insane.

That is why the jew alone is the father of class struggle.

But let us listen some more:

“One may lend money to Gentiles at usurious rates.” (Kaba mezia Tob.).

“The jew should always speak in a way that makes him look innocent” (Pesachim 3a).

“The jew should always fit in with the people around him” (Katubot 17a).

“What is the role of the jew on the earth? To appear stupid” (Chullie 89a).

“As soon as the jews learn wisdom, they also become sly” (Sota 21b).

jahwe will not forgive a jew who returns a lost item to a Gentile” (Sanhedrin 76b).

“If a house has been rented to a Gentile, anything found in it belongs to the jew who finds it, even if it is in the middle of the house” (Kaba mezia 26).

“If a jew finds money in a place frequented by many people, it belongs to him because its owner has lost it; the jew, after all, does not know that someone has lost it” (Kaba mezia 21b).

“The jewish soul lusts after robbery and sexual crimes” (Chygiga 11b).

Workers, listen to this:

“Bribe Gentile judges before they sign the judgment” (Gittin 28b).

The jew both bribes and allows himself to be bribed. Listen to what the jew saw about justice:

The jew is the laziest creature.

Listen to what the jew himself says:

“You jews to not need to get up early, to go to bed late, and to eat bread won by your sweat, for jahwe gives to his jews even while they sleep” (Joma 77a).

This highly immoral attitude toward labor is entirely consistent with the capitalistic opinions, and the lust for profit and exploitation, of the jew.

In conclusion, listen to the jew as murderer and war criminal:

“Gentiles should be ruined, but the jews should rejoice” (Baba mezia 33b).

“Kill the best of the Gentiles” (Aboda zara 26b Tosafot).

This murderous and criminal standpoint leads to the jewish attitude toward war:

“It is permitted to incite the world’s Gentiles into war” (Berakot 7b, Megilla 6b).

“When you march to war, do not be the first, but rather the last, so that you may also be the first to return home” (Pesachim 113a).

I believe that this is enough to show the amoral nature of the jew. The jew knows no morality, no decency, and he has no conscience. He is the parasitic antipole of humanity.

If anyone wishes further proof for the genuinely parasitic nature of jewry, he should ask whether or not the jews have ever created a culture, an economy, or a state of their own. Can anyone find a single jew anywhere who, in any field whatever, has shown creative, original abilities? I know that jewish propaganda has been trying for millennia to find this proof.

Whenever a jew somewhere or another shows some superficial talent, the whole jewish mess tries to make such superficial talent into real talent in order to prove that the jews, too, can be creative. However, when anyone looks behind such jewish machinations, he will easily be able to prove that the ostensible jewish creations are actually stolen, plagiarized, or borrowed from somewhere else.

Even the claim that in ancient times the jews had their own state, which the zionists today use to support their claim for a new state, is false. There was a Middle Eastern ghetto in jerusalem and its surroundings, but it hardly united all the jews in the Middle East. We know that there were many more jews living in Babylon, Egypt, Greece, and on the Greek islands, than there were in Jerusalem.

And when we investigate this presumed jewish state more closely, we learn from history that there were constant rebellions and counter-rebellions. One priest fought another priest. There was eternal unrest and rebellion throughout the ancient era, and into the Roman Empire. The myth of a jewish state is as much a lie as all the other jewish claims of their accomplishments.

However, in one area one must grant that the jews have the greatest gifts.

No other people on earth is more gifted in criminality, in lies, in theft, in exploitation, and in corruption than the jew.

The jew can behave no differently, because he is by nature born to crime.

It is his fateful drive: “The tragedy of Lucifer!” All jews are so inclined, one a little more, another a little less. Crime binds them together. That does not build a jewish community, for that would be a positive trait. Quite the opposite. One must see how the jew cheats, exploits and tortures his blood comrades when he is placed in power over them. There is no worse traitor to his own blood than the jew. I myself have seen how jewish overlords misuse their jewish comrades and exploit them to death.