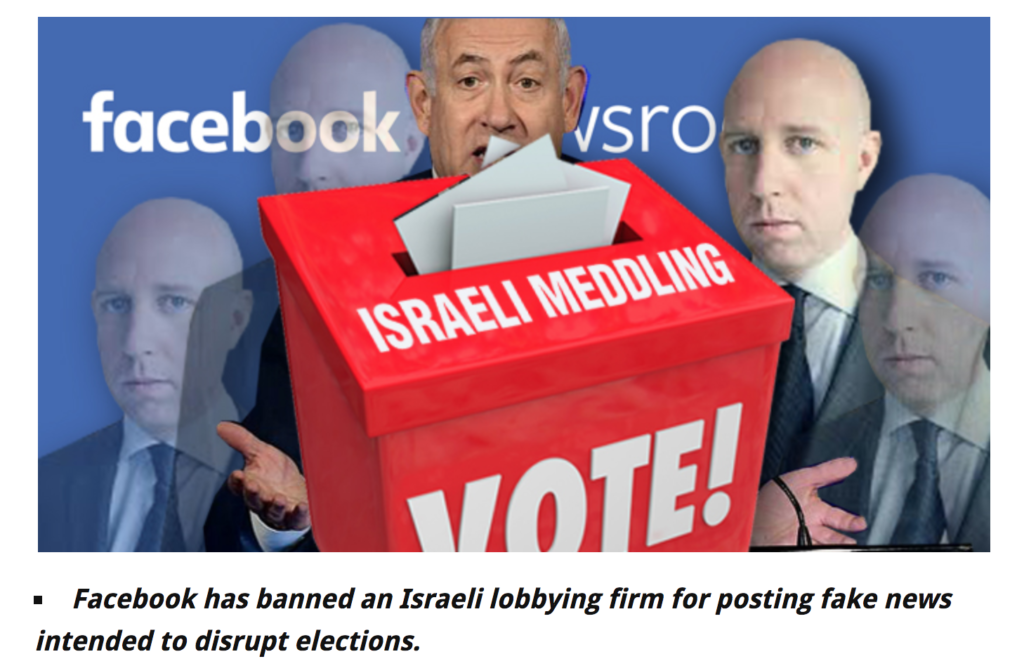 A mysterious Israeli-based political consulting and lobbying firm was recently banned from Facebook for spreading fake news and disinformation designed to interfere with and disrupt elections in various countries around the world.

According to Nathaniel Gleicher, head of cybersecurity policy for Facebook, 65 Israeli accounts, 161 pages, dozens of groups, and four Instagram accounts were recently purged by the social media giant, which has come under increasing scrutiny in recent years.

In the aftermath of the purge, Facebook explained that the individuals associated with the banned accounts were tied to Archimedes Group, a Tel Aviv-based tech startup whose reported CEO, Elinadav Heymann, previously served as a spokesman and adviser in the Knesset, the unicameral legislative body in Israel. Heymann was also a senior intelligence agent in the Israeli air force and had worked as the director of the pro- Israel lobbying group European Friends of Israel, a major player in Brussels and the European Union political scene.

The Archimedes Group’s official website appears to have been taken offline in the wake of the scandal, and individuals associated with the mysterious firm have refused to answer questions from the media. Prior to Facebook identifying the group as engaging in election interference and spreading disinformation, the firm’s website boasted that it had played “significant roles in many political campaigns, among them presidential campaigns and other social media projects all over the world,” and that the organization specializes in using “every advantage available in order to change reality according to our client’s wishes,” The Times of Israel reported recently.

Gleicher accused the Archimedes Group of leading a campaign of “coordinated inauthentic behavior” designed to target Facebook users in a number of countries, including in sub-Saharan Africa, Latin America, and Southeast Asia.

“The people behind this network used groups of fake accounts to run pages, disseminate content, and to act to artificially increase engagement and make the content more popular than it was,” Gleicher stated.

According to Facebook officials, the Archimedes Group spent roughly $800,000 on fake Facebook ads going back to 2012. The ads were paid for using Brazilian reals, Israeli shekels, and U.S. dollars over the years, with the most recent ad purchase having occurred last month.

“Our team assessed that because this group is primarily organized to conduct deceptive behavior, we are removing them from the platform and blocking them from coming back,” Gleicher announced.

Many Israelis assigned to intelligence units during their mandatory military service leave the military with specialized knowledge and skills, including the use of avatars or fake identities on social media, social media influencing campaigns, and other tech skills. Once in the private sector, there are countless Israeli-based technology firms that specialize in online marketing, social media campaigns, and other online services, many with duplicitous motives such as spreading disinformation and manipulating foreign elections.

“IDF intelligence likes to use avatars,” an unnamed source inside the Israeli government explained to The Times of Israel. “They use them against Israel’s greatest enemies and they’re extremely effective. The problem is that you have all these young people who served in the 8200 intelligence unit and who know how to create fake profiles, and when they leave the army some of them say, ‘I want to make money,’ and they sell their skills to whoever will pay them.”

ISRAELI ACTIVITY ON THE DARK WEB

In related news, the FBI announced that just prior to Facebook purging the Israeli-based company for social media manipulation and spreading disinformation, yet another Israeli team involved in setting up and operating an illegal online marketplace on the so-called “darknet” had been arrested.

Two Israelis were arrested at the beginning of this month on charges of money laundering conspiracy, the AP reported. A grand jury in Pittsburgh indicted the two Israelis, who were eventually arrested, one in France and the other in Israel. The team apparently made over $15 million in their illegal scheme, which involved operating an online market place known as “DeepDotWeb.”

“DeepDotWeb” reportedly “provided users with access to marketplaces where vendors sold everything from illegal narcotics such as fentanyl, heroin, and crystal methamphetamine, to assault rifles, malicious software, hacking tools and stolen financial information,” according to the AP report.

Many advanced Israeli technology firms and startups are organized, managed, and funded by individuals who formerly served in the Israeli military or intelligence agencies, and who many times have deep connections to the military and political establishment in the Jewish state. The Mossad, Israel’s primary intelligence agency, even has a technology innovation fund called Libertad, which invests in startups, technology companies, and other private-sector businesses in order to facilitate economic growth and innovation, particularly in businesses that are of strategic importance to the Israeli state and intelligence community.

Libertad announced recently that it was actively seeking out investment opportunities from a wider variety of technology firms than it has previously, and has encouraged Israeli startups and other firms to apply for funding.

“We have decided to expand the fund’s scope and open it to a wide range of technologies,” Libertad’s CEO recently stated. “Over the past two years, we have received many applications. Each of the companies was examined, focusing on their innovative technology, the quality of their team, and the shared potential from the investment. We made several strategic and high-quality investments and have already seen the benefits they bring to the Mossad. We now call on additional companies and entrepreneurs to approach us. We will be happy to work with the right entrepreneurs.”

Libertad aims to invest in companies specializing in a variety of fields, including financial technology, automation, 3-D scanning and printing, AI, machine learning, online privacy, smart city technologies, and many other areas related to high tech.