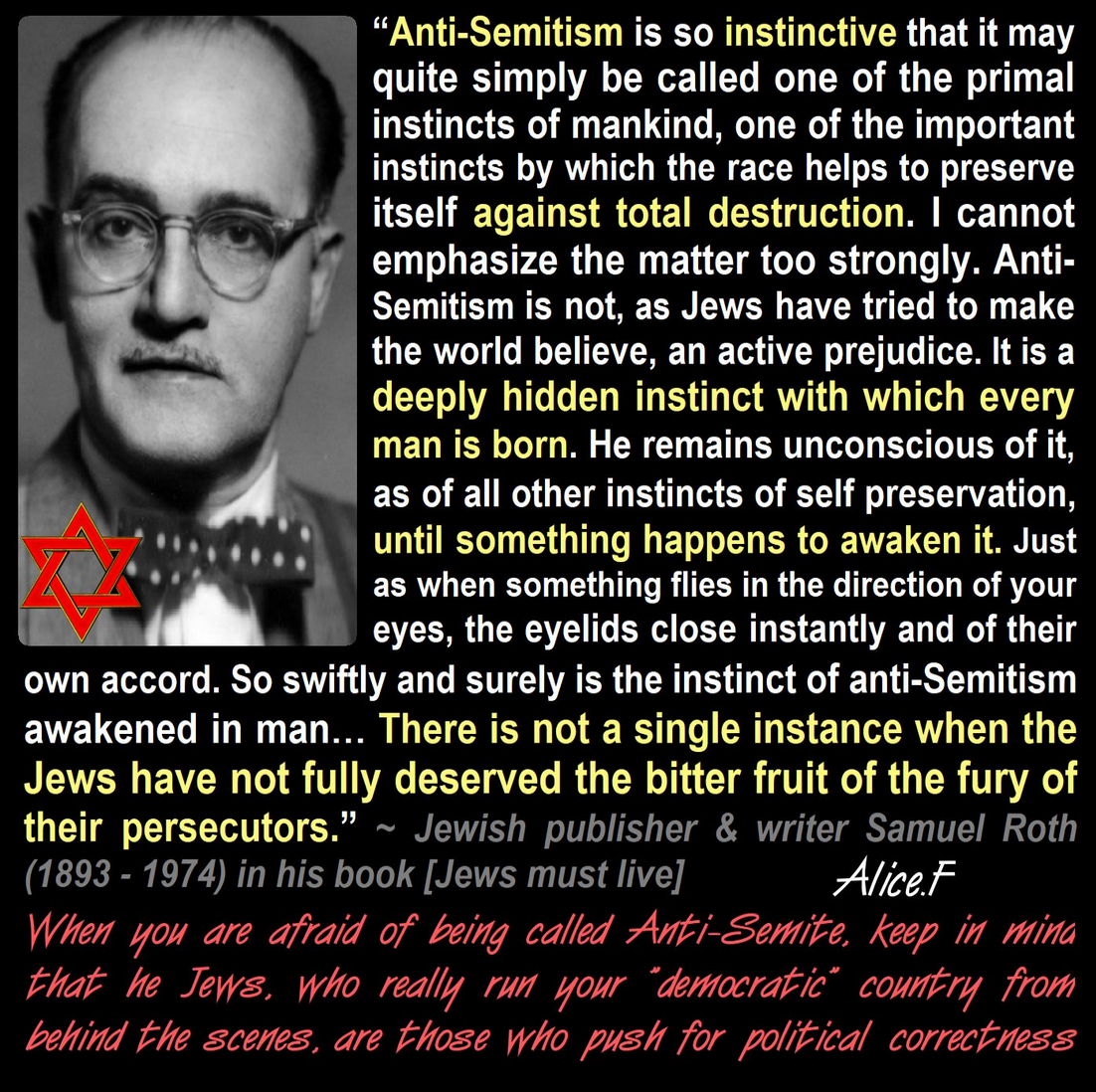 Notwithstanding the fact that most jews are NOT semites and that most Palestinians are, it is freaking HILARIOUS how the jews have been able to co-opt yet another cultural identity and completely invert everyone’s thinking about the use of the term “anti-semite.”

In Truth, most people who see what is really happening in our world are not “anti-semites.” We are not against Palestinians or people who speak semitic languages. And we are not necessarily against “jews” or “judaism,” per se. Instead, those of us who are in the know about what is going on and who is orchestrating basically ALL the evil in our world, stand firmly against the ones who are responsible for such evil — i.e., organized jewry and its luciferian agenda  to destroy our world. We stand against the synagogue of satan and the increasingly ridiculous false flag, hollywood movies designed to control people’s minds.

So – to those who would attempt to make a mockery of us and our Creator, we have a message for you.  Your trickery is not working. We see through your games. And in so doing, the window of time during which organized jewry has been allowed to operate will soon come to end. Then the world will rejoice knowing that the evil that once plagued the earth has been forever removed, never to be allowed to return again.  And this diseased group of people that constantly tries to set up laws to to prevent people from hating them or speaking out against them — or even prevent people from sharing historical truth — will exist on Earth no more.

Anti-Semitism and the death of free speech

Despite your many years of research and your compelling evidence, you may no longer claim that the tragedy which occurred on 9/11/2001 was clearly the work of Jews — Jews who own Wall Street, Jews who control the U.S. government and Jews who operate most of the mass media in the world. Why may you not say this? Because it would be anti-Semitic.

When you read the history of World War I — at least as presented by Benjamin Freedman, a famous escapee from Judaism — you learn that Germany had won the war until the international Jews got their promise of Palestine in writing, and then the United States intervened, right after U.S. Jews had created the Federal Reserve and the income tax as a foolproof way to fund future wars. But don’t mention this to your friends as it would be anti-Semitic.

World War II was much the same scam. The Jews had locked up the Western world in a massive depression at the same time Adolf Hitler had created a successful workers paradise on the full faith and credit of the German people. Secret Jew FDR and his cabal of closet Communists baited Japan into attacking Hawaii and in four years 60 million people wound up dead because the Jews wanted to exterminate the major threat to their worldwide financial hegemony, which was Hitler’s economic miracle. But don’t put this in your memoirs. It would be anti-Semitic.

Much of the food you eat today, ordinary products such as Cheerios or Quaker Oats, is tainted by Glyphosate, the dangerous ingredient in the fertilizer Roundup, which was produced by the infamous company named after the Jewish Monsanto family. They started out as slave traders after the Civil War but by the time Vietnam rolled around they were peddling the deadly Agent Orange as a defoliant to be used on Southeast Asian jungles, which left thousands of American troops (and many thousands of innocent Vietnamese) stricken by leukemia, diabetes 2, Hodgkin’s disease, myelomas, Parkinson’s, neuropathy, prostate cancer, lung cancers and various other sarcomas.

Inexplicably put in charge of America’s food supply thereafter, Monsanto then produced Glyphosate, which is applied in the field to most of the foods you eat, and entails another laundry list of diseases even longer than the last. Roundup causes the same type of oxidative stress and neural cell death observed in Alzheimer’s disease. But the Monsanto family shrewdly shed themselves of their notorious company a few days before losing a $289 million lawsuit to a man who successfully argued the toxic weedkiller caused his terminal cancer. Monsanto sold the whole company to the German pharmaceutical giant Bayer in its attempt to escape liability for poisoning the world. You could call that another suspicious Jewish maneuver, but that would also be deemed anti-Semitic by all those publishers and editors paid by Jews, which includes everyone on TV.

This takes us to the political realm, and the Cynthia McKinney revelation that if national candidates don’t sign a pledge to support Israel they can’t get bank loans to fund their campaigns. This largely accounts for the similarity of Democrat and Republican candidates, because they are all beholden to billionaire Jews for their campaign financing. As a result there has never been a recent presidential candidate who has not supported Israel. Is it anti-Semitic to say so? Of course. These days, saying anything more than mild criticism of Jews or Israel is by Jews called anti-Semitism. They continue to try to pass laws to make this mandatory for everyone. The result of this would be to make it impossible to accuse Jews of any crime at all, because such an effort would automatically be anti-Semitism.

Alas, this is already the case in the European Union, where the act of defending yourself (and with the truth, I might add) against clinically insane laws (all based on egregious Jewish historical lies) that decree the truth is no defense when Holocaust laws are broken.

And that’s what they want. Total immunity for every crime they commit and no negative discourse about Jews among the entire population. Of course it is clearly anti-Semitic to suggest this is true in a world turned upside down in which you must believe what they tell you to believe or you will go to jail.

No matter how much evidence you have against them, when all the judges, lawyers and expert witnesses are arrayed against you, you have no shot. Our freedom of speech is dead and gone.

We are all trapped in a system of value that is totally controlled by ultra rich Jew moneylenders who charge us to use our own money, and then bankrupt us to steal our homes. It is a system that has put the U.S. $20 trillion in debt, with the bulk of that total siphoned off by Jewish commissions, swindles and rigged financial regulations that profit only themselves (I’m thinking derivatives).

This enables them to own all the world’s media, whose influence has shaped the curricula of universities, the content of magazines and newspapers, and the character of public events. And it has turned the population into violent and superficial twits who don’t really care about other people, which is the total alienation from each other (making it necessary rely on the state) that the Jews have always sought to instill in their goy victims.

It has been said that Jews profit from the compulsions and addictions of others, which would account for their primacy in the drug and sex trades. Those consumed by libidinous pursuits make easy prey for the Jew blackmailers who run our country.

With such penetration into the legal systems of all nations, Jews need no proof for their claims. Only the weight of their bought off mass media and the righteous assertions of their paid-off politicians are sufficient to convict anybody of anything.

Gradually, even to dull minds, the configuration of the conspiracy is beginning to emerge. Too many lies — lies that lasted people’s lifetimes and spanned multiple generations — created a population of misled sycophants who could no longer tell right from wrong.

Do we dare speak of conscience when low IQ migrants are hired by Jewish billionaires to disregard all laws and invade the white countries? It is a deliberate attempt to destroy civilization, to keep countries in shambles so that the Jews can regulate the refugees while they properly fleece the gullible goyim. As I’ve said before, our would-be Jew masters want to keep all countries in a state of disarray and chaos, which makes them easier targets for their sick strategies.

Telling the future as honestly as possible has become a dangerous thing to do.

Once the biggest question on our young minds was  . . . is she a virgin? Now, thanks to Jewish control of our educational and entertainment systems, we’re teaching first graders how to be homosexuals!

You may remember the $250,000 fine New York City officials approved for using the wrong pronoun when addressing someone on the LGBT spectrum (longest one seen so far: LGBTIQCAPGNGFNBA).

Among the fineable offenses are:

Requiring an individual to provide information about their medical history or proof of having undergone particular medical procedures in order to use their preferred name, pronoun, or title.

The NYCHRL requires that individuals be permitted to use single-sex facilities, such as bathrooms or locker rooms, and participate in single-sex programs, consistent with their gender, regardless of their sex assigned at birth, anatomy, medical history, appearance, or the sex indicated on their identification.

Note well the phrase: “consistent with their gender, regardless of their sex assigned at birth.” It is a classic rendition of the phony psychological jargon that has made our society insane.

The goal of the Jews has always been to turn the whole population into low IQ blacks, through music, sports, encouraging young people to feel entitled to the things white culture has created, which is probably why most black heroes are pathetic criminals whom the Jew press attempts to elevate to folk hero status. The bully Michael Brown and the suburban thug Trayvon Martin come to mind.

Our teachers strive to elevate homosexuals to hero status, an honor ordinary kids prior to puberty come to envy. Though fawned upon by lurid Jewish media, mentally ill transgenders tarnish the whole culture that supports such a twisted normality as cynical males take pleasure in winning women’s sports championships.

The World Health Organization announced Monday (11/5/18)  that in its newly released edition of the International Classification of Diseases, gender incongruence will now be classified as a sexual health condition. <http://www.who.int/news-room/detail/18-06-2018-who-releases-new-international-classification-of-diseases-(icd-11)>

Let’s be clear about this. This is rightly called sexual insanity. That our society tolerates this displays to all its own depravity.

And now you must decide whether this law that they call legal but which bears no resemblance to the living truth should be followed or disobeyed. When your choice is becoming a corpse or a robot is something that only you should decide.

You could say these are the new Dark Ages and death worshipping Jews are the enemy of all life on this planet, but it would be anti-Semitic.