Before sharing this article, let me make it clear that I do not believe radiation caused a deadly virus. I do not believe there is any such thing as a deadly virus. All of my research over the past few weeks has indicated to me that viruses are a completely natural part of our immune system. Our bodies create viruses when our cells become toxic. The viruses release some type of solvent that helps to break down the toxins and move them out of the body. Hence, viruses are a beneficial part of our health. We cannot “catch” or “spread” a virus since they are unique to our own biology. The only way we can end up with an alien virus inside of our bodies is though INJECTION!

The medical establishment — being the satanic institution that it is — has completely reversed reality, telling us viruses are deadly and their vaccines (filled with genetically modified viruses and all manner of neurotoxic shit) can help us. Nothing could be further from The Truth. For those who would like to understand the facts about viruses, please see here, here, and here.

And please understand that the radiation is, indeed, poisoning our cells (please see here and here), and it is highly likely that our bodies are producing viruses in an effort to help our cells detox from the radiation poisoning. But the viruses are not harming us in any way. IT IS THE RADIATION ITSELF THAT IS MAKING PEOPLE SICK AND KILLING THEM. THIS IS WHAT PEOPLE NEED TO UNDERSTAND. WEARING A MASK AND/OR GLOVES WILL NOT PROTECT YOU FROM RADIATION POISONING. The only way to avoid getting sick is avoiding the radiation.

In any event, it is good that people are waking up to the radiation threat. May this awakening sweep across our planet and ensure the demise of ALL THOSE WHO ARE DELIBERATELY ROLLING OUT THIS RADIATION GRID TO HARM US. May every single one of them rot in hell for the rest of eternity. And this includes members of the lying mainstream media who are covering up the radiation danger and spreading nonsense about a viral pandemic that does not exist.

British mobile network providers have been forced to debunk ‘baseless’ theories circulating online that 5G masts are linked to coronavirus after several were set on fire.

MobileUK, the trade organisation representing Three, O2, EE and Vodafone, added it was concerning the pandemic was being used to further such untruths and said some of the industry’s key workers are being abused over the unfounded 5G myths.

It comes after videos emerged online of phone masts ablaze, including one in Birmingham and one in Coventry.

Shocking footage posted to Facebook captured the moment the 70ft (21m) masts erupted in flames, with firefighters dispatched to tackle the inferno.

Emergency services were called to the blaze on Spring Road in the Sparkhill area of the city at 8.18pm on Thursday night. Firefighters battled to douse the flames for two hours while police closed the road to protect traffic. Police say they are not yet sure what started the fire.

West Midlands Fire Service said eight firefighters attended an incident on Thursday evening, involving a 70-foot tower on a telecommunications site in the Sparkhill area of Birmingham – though a spokesman said the cause was yet to be identified and could not confirm whether the mast in question was 5G.

A West Midlands Police spokesman said: ‘We’re aware of a fire involving a phone mast, but are awaiting further details on its cause.’

But in a now-deleted Facebook group, conspiracy theorists claimed 5G being emitted was sparking coronavirus.

There is no scientific evidence that 5G technology poses any threat to human health and it was confirmed as safe by the radiation watchdog last month.

Facebook said the banned page was deleted for breaching its policies because it has the potential to cause real world harm.

However, one user claimed they reported the page early on to moderators for promoting violence, only to receive a response saying it was not deemed to be in violation of Facebook’s community standards. 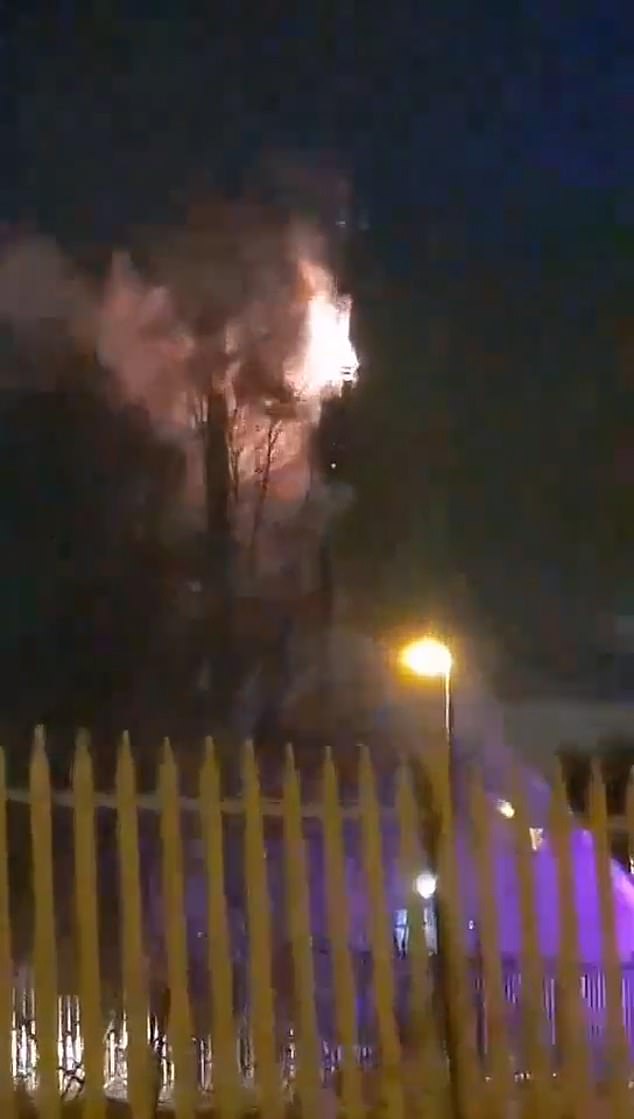 Pictured, a screengrab from a video posted online of the Birmingham mobile network mast ablaze. It is unknown if the specific mast was emitting 5G and it was allegedly set on fire by conspiracy theorists saying it was linked to coronavirus

Several videos claiming to show 5G towers on fire were posted to a page on Facebook, which encouraged others to do the same.

Mobile UK, the trade body which represents network providers, said it is ‘concerning that certain groups are using the Covid-19 pandemic to spread false rumours and theories about the safety of 5G technologies’.

‘More worryingly some people are also abusing our key workers and making threats to damage infrastructure under the pretence of claims about 5G,’ a statement said.

Several videos claiming to show 5G towers on fire, including one in Coventry, were posted to a page on Facebook, which encouraged others to do the same. Mobile UK said: ‘[It is] concerning that certain groups are using the Covid-19 pandemic to spread false rumours and theories about the safety of 5G technologies.

‘More worryingly some people are also abusing our key workers and making threats to damage infrastructure under the pretence of claims about 5G.