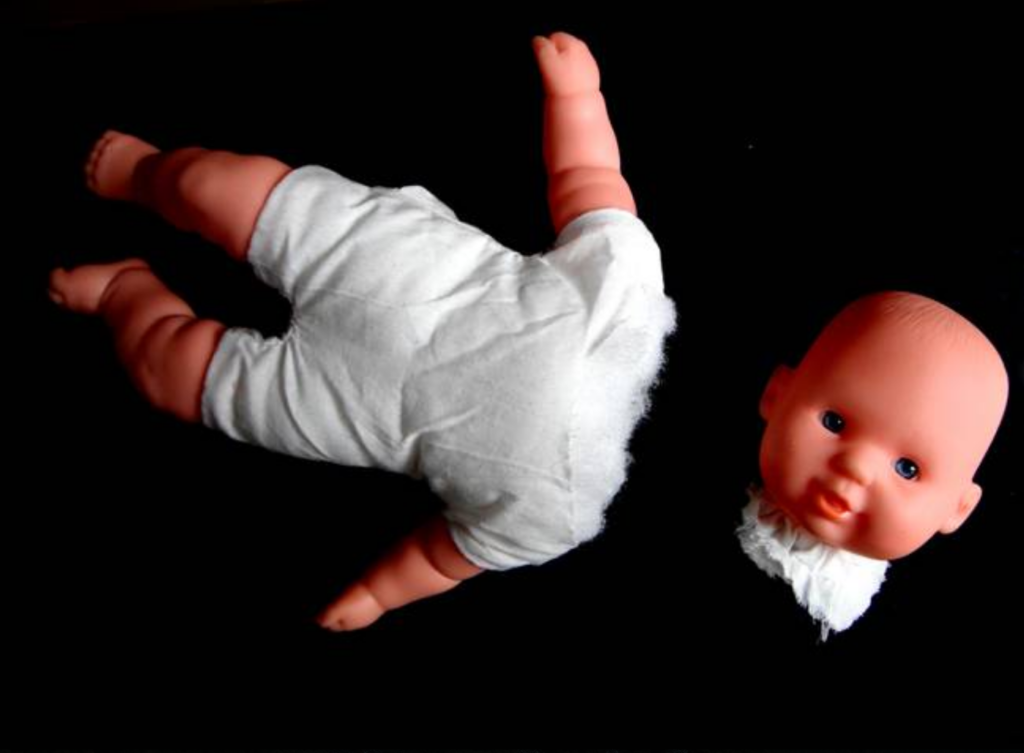 This is absolutely not the first time this has happened and it will not be the last.  As long as these insanely controlling OBs continue to FORCE BABIES OUT OF THE WOMB BEFORE THEY ARE READY TO BE BORN, they will ultimately end up terrorizing, traumatizing, physically violating and even murdering innocent mothers and babies who, if left alone, would have fared far better.  In the case below, this was a “top NHS doc.” The baby was no doubt trying to hightail it out of the mother’s body due to ultrasound exposure a few days earlier. Ultrasound is known to induce premature birth and miscarriage. It causes massive overheating of the amniotic fluid as well heating of the blood (1), brain fluids, and bones.

Ultrasound also creates terror due to how loud it is, and ear damage and hearing loss can ensue as a result of being blasted with 120 decibels of sound combined with massive amounts of artificial radiation known to cause DNA, chromosomal, and mitochondrial damage.

The mother’s vagina was cut THREE TIMES while the insane doctor forcefully PULLED and TUGGED on the fragile baby to force the baby to come out.    The slices in the mother’s body were made without anesthetic, despite this being the most sensitive part of her body.  It is likely she will experience massive pain for weeks and months and perhaps become incontinent and never be able to experience pleasure in this area again.  This was her first birth.  It could very well be her last because women who suffer from this kind of trauma may not attempt to give birth again.  Her baby’s head was literally ripped off its body and got stuck in the womb.

This kind of insanity can only happen within the walls of occult luciferian temples otherwise called “hospitals.” Inside of these evil places lurks an incredible amount of darkness including blatant poisoning, medical torture, and murder. The fact that we believe hospitals are a safe place to give birth is a testament not only to our stupidity and gullibility, but to the ease with which we can be swayed by suggestions from the dark side.

It’s wakey wakey time people. Either we snap out of the mind control now or our children are doomed.

For other links regarding the decapitation of babies during hospital birth, see here, here, here and here.

(2) Shauna Ann Walker, The Dangers of Ultrasounds: Is Your Doctor Lying When They Say There is No Risk?, Yahoo! Contributor Network, January 30, 2007. Link erased from the internet. Article must be retrieved from the library.

A British medical tribunal heard a harrowing case Thursday involving a premature baby boy who accidentally was decapitated as he was being born.

The Daily Mail reports lawyers accused Dr. Vaishnavy Laxman of making the “wrong choice” in trying to deliver the baby naturally after his mother’s water broke at 25 weeks of pregnancy.

The baby boy was in breech position, and his head became lodged in his mother’s cervix during the emergency delivery, according to the report. Lawyers for the baby’s family said Laxman should have delivered him by cesarean section.

The mother, who is not named in reports, said she knew her unborn baby boy was breech, because she had an ultrasound scan just a few days earlier. She said the nurse told her she likely would have to have a cesarean section.

When her water broke 25 weeks into her pregnancy, the mother said she was rushed into the labor room without being told what was happening.

“A lot of people were talking they kept saying the baby needed to come out but nobody looked at me in the eye and told me what was going to happen,” she said.

“I was examined by a doctor but she didn’t say anything to me. They were checking for the baby’s heartbeat and it had plummeted and that’s when I was told it was going to come out,” she continued.

She said they did not provide her with pain relief, and soon urged her to push.

“I tried to get off the bed but they pulled me back three times and just said they had to get the baby out,” she continued. “They twice tried to cut my cervix and nobody told me they were going to do it. There was no anaesthetic. I said to them ‘it doesn’t feel right, stop it, what’s going on, I don’t want to do it’ but nobody responded to me in any way.”

Though she did not know it at the time, something went horribly wrong.

Charles Garside QC, a lawyer for the General Medical Council, said Laxman made the wrong decision to try to deliver the baby boy in breech position.

“… there was an obstruction during the birth which proved to be fatal. Dr Laxman allegedly delivered the legs, torso and arms successfully but whilst trying to deliver the head, it got stuck in the cervix,” Garside said.

“The attempt to manipulate the baby’s head to come out of the cervix failed because the cervix has clamped onto the baby’s head and despite effort made to assist, these efforts failed. Dr Laxman made three attempts to cut the cervix with scissors but Baby B’s head was separated from his body and his head was stuck inside Patient A’s body,” he continued.

Keep up with the latest pro-life news and information on Twitter. Follow @LifeNewsHQ
According to the testimony, Laxman was so distraught by what happened that two other doctors came in and delivered the baby boy’s head via cesarean section. They then stitched the infant’s body back together before letting his mother hold him, Garside said.

After the birth, the mother said her sister came in to tell her that the baby boy had died. She said Laxman came in a little while later to comfort her and express her sorrow at the baby’s death.

“I just said ‘it’s alright, these things happen, I forgive you.’ She went away but I started screaming when I found out the full extent – I was just crying. I was upset because of the severity of his injury,” the mother said.

“… he was not stillborn he was decapitated. I was pregnant, my first pregnancy I wasn’t sure what was going on and I was told it was the safest place possible. Nobody explained the plan or risks associated. It was like disorganised chaos and I was scared,” the mother said.

Laxman’s lawyer Gerard Boyle QC said she did not contribute to the baby’s death, but she is extremely sorry for the family’s loss.

“She knows that no amount of words can or will soften your pain but she is hoping that knowing that what she was trying to do was her very best to deliver your baby quickly and sufficiently and she had best intentions at heart,” Boyle said.