You truly have to marvel at the depths of depravity to which jews will stoop… even to the point of defending the “right” of child-molesting, cross-dressing, gender-confused men to read stories to young children about how they don’t have to be who they really are.

How did we ever let things get this far? Our first mistake was letting the jew into our territory.

The customs and behaviors of the Jews are base, abominable and rooted in the innate depravity of the people themselves… As a race, they are prone to lust and amongst them, nothing is unlawful or immoral. They regard as profane all that we hold sacred, while on the other hand, they permit all that we abhor…

Editor’s Note from The Ugly Truth

It was written 2000 years ago by–of all persons–a pagan, none other than the famed Roman historian Tacitus.

Even the pagans could see the nature of ‘the beast’ for what it was, and going all the way back 2,000 years.

Keep in mind, there was no ‘Talmud’ back then, nor were there any ‘Khazars’.

Only followers of Torah-Judah-ism, the type which entire legions of ‘eks-purts’ today maintain were different and distinct–‘true Jews’, in effect– before the arrival of the infamous ‘Talmud’ and before the supposed ‘mass conversion’ of the people of Khazaria to Talmudic Judah-ism.

Remember as well that ‘grooming children’ for sexual purposes BEGAN in the Jews’ Torah (Old Testament) which deluded Christians consider to be just as ‘holy’ as the New Testament, specifically with the biblical character Lott, the nephew of Abraham, who trafficked his 2 virgin daughters to a group of would-be gangbangers from Sodom, instructing them to ‘abuse them as it may please you’.

A few paragraphs later, the reader is then treated to the story of the manner by which the same Lott gets drunk and engages in incestuous sex with his 2 daughters.

As the old saying goes and as the statement from Tacitus makes Kristol clear, ‘there is nothing new under the sun’.

From the Jewish Telegraph Agency

(New York Jewish Week) — As right-wing protestors descend upon Drag Story Hour events across New York, they have frequently been met by a loosely connected movement of counter protestors that includes many progressive Jewish groups.

Since September, right-wing activists have routinely protested Drag Story Hour events, where a person dressed in drag reads to children. The aim of these story times, according to the founder of the Drag Story Hour New York chapter, is to promote literacy while giving children positive queer role models.

At the Queens Public Library in Jackson Heights on Dec. 29, at least five members of the Proud Boys, a far-right extremist group, showed up to harass people attending a story session. Those protestors were met by hundreds of activists from the other side, many of whom are Jewish. They included members of Jews For Racial and Economic Justice, Outlive Them, United Against Racism and Fascism and other other organizations.

“We’re out here,” said Sharona Farber, 32, who is a member of the Jewish anti-fascist group Outlive Them, which formed in response to the 2018 Pittsburgh Tree of Life shooting and has since become involved with other forms of activism across New York such as fighting for the homeless and against U.S. Immigration Customs and Enforcement (ICE) raids.

Those protesting Drag Story Hours claim the events are harmful to children, calling parents who are bringing their kids to the event “groomers” and “pedophiles” to their face. Demonstrators have breached library doors in the city on three separate occasions. They have also vandalized the homes and offices, using anti-LGBTQ slurs, of three New York City Council members who have shown support for Drag Story Hour. 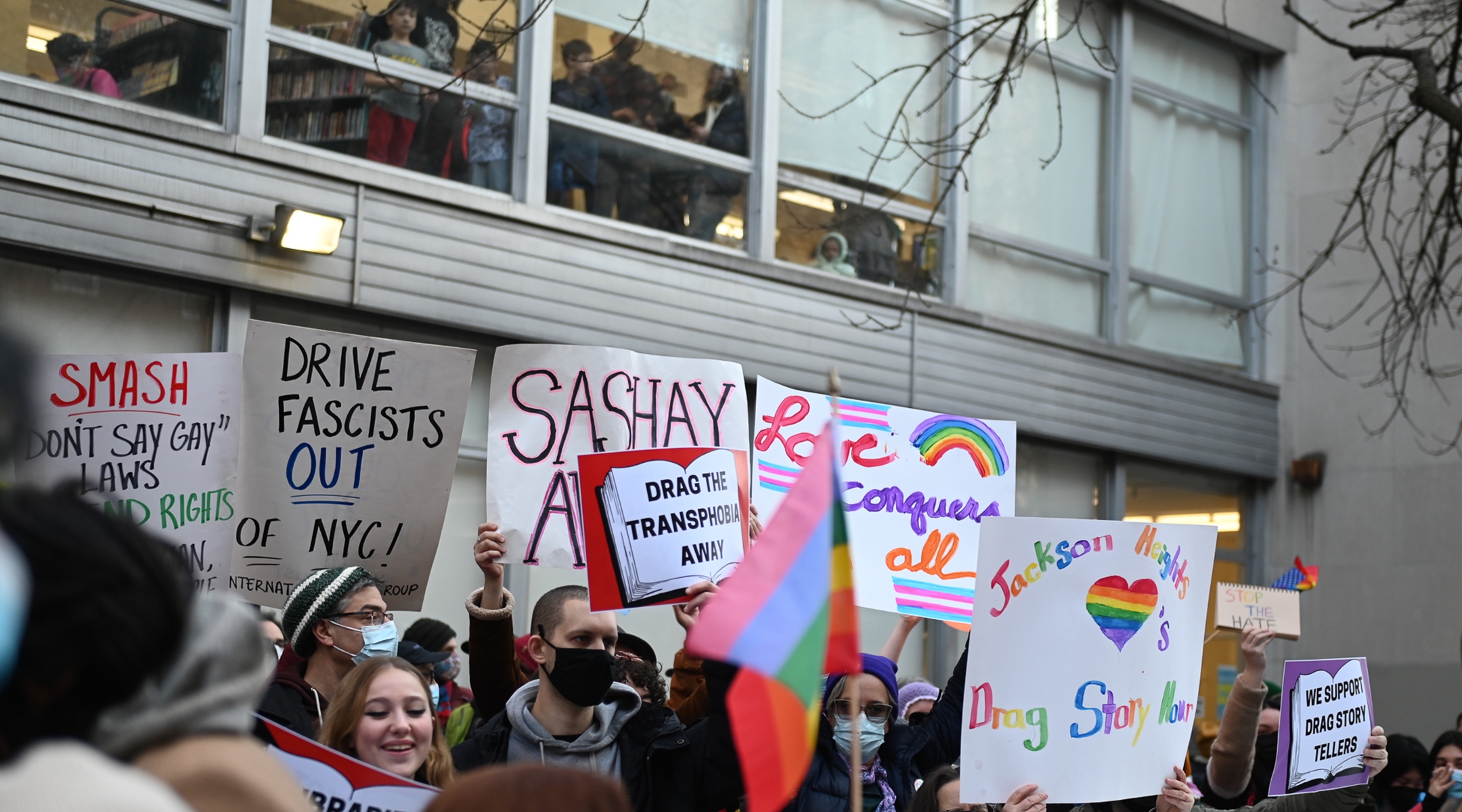 Hundreds of people defended the Queens Public Library at Jackson Heights against right-wing protestors, including members of the Proud Boys and neo-Nazis, last Thursday. (Gili Getz/Courtesy)

Protestors have targeted 10 Drag Story Hour events in New York, according to independent reporter Talia Jane, who has been documenting the group on Twitter since September.

This group of protestors, which calls itself the Guardians of Divinity, started as an anti-vaccine movement in the pandemic. “We have lost our jobs and been arrested for protesting this madness,” a statement on the group’s Twitter said. “Now they are coming for your kids with programs like Drag Queen Story Hour, where they steal your tax money to pay grown men in dresses to read gender questioning books.”

Farber told the New York Jewish Week that last Thursday there were at least 300 people defending Drag Story Hour at the Queens library branch, from all ages and backgrounds. Farber added that “there are a lot of Jews” doing the behind-the-scenes work, the organizing and the outreach that goes into “pulling these defenses off.”

“Jews are so heavily represented in the left,” Farber said. “There’s been a reinfusion of energy on what people call the Jewish Left. There are people getting self organized into small groups that do take political action into what they believe is needed to create a better world.”

“When there’s a threat of neo-Nazi violence against synagogues, the idea is not that we should stop going to synagogue,” Ellman-Golan said. “We actually deserve to be able to gather and pray or engage in whatever culture and ritual we want to. We believe that a community of diverse New Yorkers coming together to ensure that can happen, that’s the best way to do that, with community defense.”

She described the scene as “two sides”: one that included colorful rainbow signs, glitter and Disney songs, while the other side included a neo-Nazi giving a “Heil Hitler” salute while talking about “a future for white children.”

“It’s a violent attempt to stamp out trans people,” Ellman-Golan said, adding that there is “a very clear link between antisemitism and transphobia that is increasing at a terrifying rate.”

Ariela Rothstein, a queer Jewish parent who took her 6-month-old child to the Jackson Heights Drag Story Hour last Thursday, told the New York Jewish Week that these shouldn’t be controversial events. “It’s people sharing stories with kids,” Rothstein said. “There were people shouting all kinds of names. Things that are really disgusting, that I don’t really want to repeat or put in print. All we wanted to do was go into the library and hear some stories for our child.”

“It’s actually sad,” she said. “What we’re actually doing is talking about love and spreading representation of different types of people.”

After last Thursday’s event, a video circulated online showing members of the Proud Boys being led by members of the New York Police Department into the 74th Street-Broadway subway station in Jackson Heights without paying.

“We don’t feel like the NYPD is there to actually protect or defend or anything like that,” Ellman-Golan said. “If their goal is to make sure that Drag Story Hours can continue in peace, they are failing.”

The NYPD said in a statement on Monday that it was trying to “to deescalate the situation and prevent further violence a decision was made to escort one group to the Jackson Heights subway station to remove the group from the area.”

According to Lima, however, the video of the police letting the Proud Boys into the subway showed them getting “a literal free pass for what they were doing.”

“The police never protected families like ours,” Lima said. “That’s not who we turn to for safety. We are protecting ourselves. The queer community understands very well what it means to be ostracized or hated, and knows how to show up for people.”

Miriam, a queer Jewish activist who regularly shows up to defend Drag Story Hour, told the New York Jewish Week that she was only comfortable giving out her first name out of fear of being doxxed — having her private information made public — by the right-wing protestors. “This can result in significant stress, but also loss of unemployment, housing and in some cases physical attacks,” Miriam said. “If your employers get 50 calls a day from people telling them that you are a pedophile, that may make your life hard. It’s a significant concern.”

Miriam said that these protests are a personal attack on her queer identity, but “it doesn’t mean I’m there as a queer person rather than a Jew.”

“I’m there as both things,” Miriam said. “Jews have to be opposed to fascism because fascism is opposed to Jews. Jewish history and Jewish culture gives us ample reasons to oppose fascism. We should never be letting fascists in the streets unopposed, no matter what they are doing.”

Rabbi Rachel Goldenberg of Malkhut, a progressive congregation in Jackson Heights, showed up at a Drag Story Hour defense on Oct. 28 at the library. She told the New York Jewish Week that “it was a pretty unnerving experience, to be facing such right-wing vitriol.”

“The hatred feels like it’s coming from the same place of white supremacist activism, which holds hands with antisemitism,” Goldenberg said. “It was really painful and shocking to hear the language that was being used.”

She recalled how a large man burst into her group while they were singing in front of the library. “He was very loud, hostile and violent,” Goldenberg said. “Not by throwing punches, but he had a violent vibe. You get the sense that they have been riled up by lies and conspiracy theories. They have no qualms about getting in our faces and accusing us of wanting to groom children.”

Goldenberg surmised that so many Jews are showing up to protect Drag Story Hour because they’re inspired by the emphasis Judaism places on education. “We value learning,” Goldenberg said. “We value being open to multiple opinions, we value open discussion — that’s what Torah is about. Drag Story Hours and public libraries are then all very much tied into Jewish values.”