This article is copyrighted by GreenMedInfo LLC, 2019 In a poetic twist of fate, the very same day that the American Health Association reversed decades old guidelines on using aspirin to promote heart health and prevent strokes, advising against its daily, low-dose use in healthy adults, Bayer’s Monsanto buyout headache transmogrified into a debilitating migraine…
A federal jury in San Francisco has found that Monsanto’s weed-killer glyphosate was “a substantial factor” in causing a man’s cancer, delivering a major new blow to the agrochemical giant now owned by Bayer who acquired it last year.
This is the second such verdict against Monsanto-Bayer within the past five months, following the initial victory of Dwayne “Lee” Johnson who was awarded 78.5 millions last October; neither verdict, including 1,600 other pending cases in the US District Court for the Northern District of California, bodes well for Bayer’s hemorrhaging stock value.
Last October, Ian Hilliker, an analyst at Jefferies LLC in London, estimated in a note to clients that based on a class action lawsuit involving 8,700 plaintiffs (at the time) believed to have cancer as a result of glyphosate exposure, Monsanto’s liability could reach $800 billion dollars. To put this in perspective, the original Bayer-Monsanto buyout offer was $57 billion dollars. Clearly, this no longer looks like an “asset” to Bayer and its stockholders. 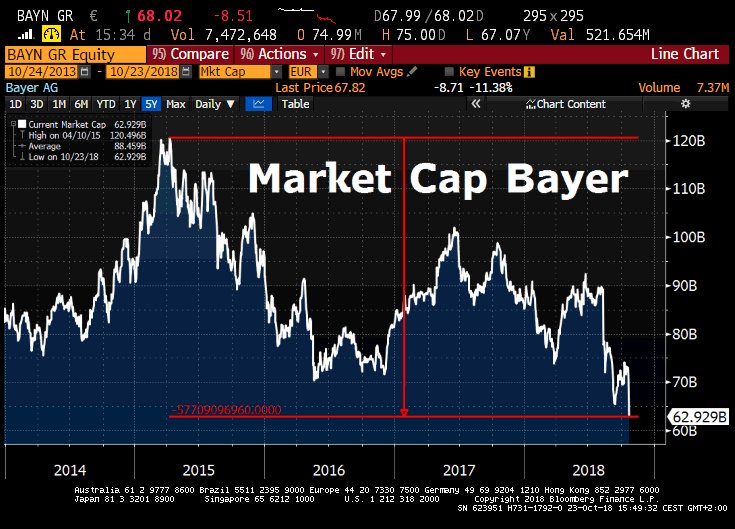 In Tuesday’s verdict, jurors unanimously determined that Edwin Hardeman, a 70-year old Sonoma County man, developed non-Hodgkin’s lymphoma (NHL) as a result of his exposure to the herbicide glyphosate commonly marketed as Roundup. Hardeman testified that he sprayed Roundup on his 56-acre property in Santa Rosa, CA, between 1986-2012, in order to control poison oak and weeds. In 2015, he was diagnosed with stage 3 NHL at the age of 66, and has undergone conventional treatment.

The next phase of the case will look at whether Monsanto knowingly concealed information about the potential harms of its product, and whether damages will be awarded to Hardeman. And the next case to go to trial will be Pilliod v. Monsanto, which is set to begin about March 28 in state court in Oakland.
To date, Monsanto-Bayer now faces over 11,000 additional plaintiffs who claim exposure to glyphosate-based products caused them harm. Indeed, an increasingly dense body of scientific research indicates this weedkiller is a broad spectrum toxicant with dozens of modes of toxicity.
GreenMedInfo has been indexing research on the unintended, adverse health effects of glyphosate for over a decade. You can view over 230 abstracts on the topic, linking glyphosate to over 50 adverse effects on the Glyphosate Toxicity database.
With this latest verdict, the tides are clearly turning against corporations who do not respect the precautionary principle and therefore sacrifice both human and ecological health in the name of prioritizing profit and gaining control of the marketplace.
At the time of this writing (March 19th, at 9:30 pm EST), Bayer’s stock was at 19.67 per share. Once the news sinks in, we expect it to decrease significantly. [Update: On March 20th, Bayer’s stock crashed 9.6%. On March 21st, it sunk lower and is now at 17.29 a share.]